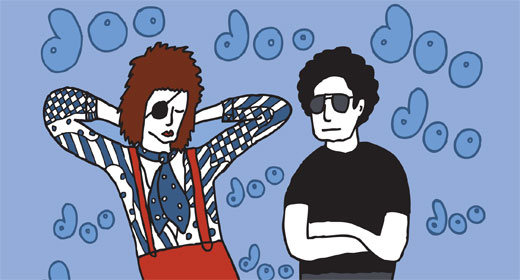 SOURCE Virgins: Being A Rock Star

THE REASONS?
I’ve been involved in and around music for most of my adult life – working on records from Einstürzende Neubauten to Katie Melua, as well as passing judgement on hundreds of Brighton bands for SOURCE. But always on the safe side of the desk – I’d never actually got up and done it for myself, put my money where my mouth is.

THE EXPERIENCE?
I joined the good people at Rokaoke for their intensive all-day rock star experience. It started with some basic vocal tuition singing to a backing track, where I realised with horror that the songs I’d chosen (‘Rebel Rebel’ and ‘Walk On The Wild Side’, both records I’ve owned since I was about 12) weren’t as lyrically implanted in my mind as I’d assumed. Both have ‘doo doo doos’ and stuff that need to come in at the right place, and without David and Lou prompting you it’s alarming how tricky that can be. While my fellow singers took their turn with the tutor I lurked outside, smoking my ears off and mentally securing my doo doos as they played over and over on my iPod. I then ran through the songs with the band, finished half a minute or so before they did, and panicked a bit more. We recorded a couple of versions in the studio – “OK, let’s do it again, from the third doo doo doo…” – and it was time to hit the venue.??

Brighton Ballroom has an illustrious history as a Grade 2-listed, 18th century mausoleum. It seemed a mockingly threatening legacy for a venue in which I stood every chance of dying a horrible public death. We arrived in our executive cars and were ushered into the VIP area, where I met my bass player for the evening. This made it a bit more daunting, seeing as how it was Herbie Flowers. He played bass on the songs I would be singing. On the actual records. With actual David Bowie and actual Lou Reed. I’d wondered how they were going to do the sax solo at the end of ‘Wild Side’ – the band I’d briefly rehearsed with didn’t have one. No problem. Bizarrely, Ralph Brown would be guesting. That’s Ralph Brown who played drug dealer Danny in Withnail & I. I realised I probably knew his lines in that better than I knew the ones I’d be singing. ??
The band ran through some warm-up numbers as, like condemned men, we sat watching from upstairs. I sipped iced water for my voice, darling – tonight booze would not be my friend. I didn’t want to go all Winehouse or anything. The crowd began to swell as friends and strangers alike filed in like witnesses to a rock execution. The band were nicely warmed up, I was sweating like Lee Evans. One by one we became fewer as novice singers took to the stage. Because my songs had these special guests I’d been scheduled to go on last, the headline act if you will. Compère and guitarist Kit Ashton whooped the audience into appreciative cheering for ‘God Save The Queen’ and ‘Heart Of Glass’. As the last dramatic bars of ‘We Are The Champions’ filled the room and my new friend Mike the financial adviser took his bow, I heard my own name through the PA and felt the arm of Pippa, our artist PA, on mine as I was led through the crowd.?
The voice coach Sharon had asked what I had planned in terms of stagecraft. With ‘Wild Side’ it’s probably not sensible to launch into a lavishly choreographed Lady Gaga routine, so I’d planned to vaguely wander about while singing. But it was quite cramped up there with Herbie’s massive double bass and the floor was laden with criss-crossed leads – I didn’t want to trip and bust my head open on his prized instrument. As the guest introduction preamble passed, the room was hushed and that bassline, one of the most famous ever written, rumbled out…?
Like I say, I thought I’d known these songs since I was a kid, but I’d had to come up with a clever mental link to the order of the verses. Holly, Candy, Little Joe, Sugar Plum Fairy, Jackie… We don’t need to go into what that was right now, but it worked anyway. It’s a soft song to sing and it was difficult to hear if I was hitting the notes, but at least the glare of the lights meant I couldn’t see a single face in the audience making desperate cutthroat motions or anything. My car park revision paid off and my doo doos arrived suitably on cue, the crowd helpfully singing along with the part of the lyrical “coloured girls”. Last verse wrapped up, I watched Ralph’s sax solo while silently plotting the structure of ‘Rebel Rebel’ one last time. There was actual applause, quite a lot of it to be perfectly conceited, and we were off again.?
Lou Reed’s never really been much of a visual performer for me, but I’ve got hours and hours of Bowie on video. While not much of a dancer he’s certainly got plenty of stage moves, which I thought I’d try and channel a bit within my limited floor space. The iconic intro rang out and I was away, buoyed by the cheering and plenty less nervous than I was at the start. This was more of a vocal belter with plenty of opportunity for sex-type moves and swagger, which I’ll admit I treated the audience to. Some thrusting and wiggling may have taken place. For the first time that day my interpretation of the song mirrored the band’s to a tee, possibly with some ad-libbing of the outro but at least we still all finished at the same time. I was hit in the chest by a white cotton bundle – I’d literally had a pair of panties thrown at me. I dabbed them at my brow and stood dramatically beneath the lights as applause washed over me. Yep, I reckoned. I fucking smashed that.??

WAS IT WORTH IT??
Oh god, yes. I’ve got Bowie on video saying how he’s “done all the drugs but nothing compares to the buzz of being on stage”, and he’s bang on the money. People afterwards – women, no less – were extraordinarily complimentary and as a bit of a show-off anyway I could get dangerously addicted to this. Anyone want to form a kick-ass midlife crisis band?