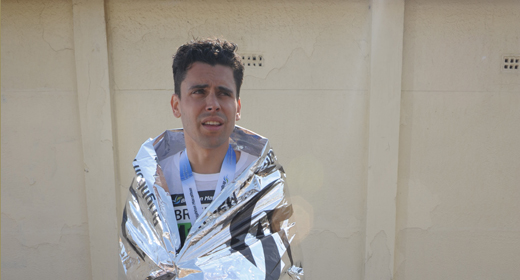 THE CONCEPT
Simple, we do stuff we’ve never done before and tell you about it. Matt Barker is a young, fit guy, but he’d never tested his endurance over a 26-mile marathon before.

THE REASONS
Far from the charity-work altruist or the Zen-like personal improver, I rather fell into the marathon – wimping out of an offer of a place from a charity seemed just too pathetic.

THE EXPERIENCE
I was staring down the barrel of 14-week beginners training schedule, having run little more than a bath since school. I did play on several school sports teams, but ever since I discovered Guinness and girls, physical exercise has been a thing of the past. So I started sensibly and methodically, following the schedule timings, which involve starting easy at the beginning of each week, escalating to a “long run” on the Sunday – three or four miles in the beginning, peaking at a couple of 20-milers at the end.

After about seven weeks, coupled with keeping half an eye on my diet and giving up booze, I was feeling pretty okay – the stiffness and aching had faded to almost nothing, I could feel comfortable running up to about ten miles. The hardest thing about the training was finding the hours to run, but what I had dreaded more than the physical side of the running was the mental toughness it requires – if I’d simply run to the pub, had a pint and run back, no one would know. Developing the willpower to do something unpleasant, physically demanding and boring was, to put it mildly, a stretch. Having said that, by week eight when training steps up a notch, I had come to look forward to the hour or so to myself. I’d even come to like pulling on my hideous professional running shoes (for a minor sneaker freak like myself, blowing a hundred quid on trainers I hoped never to be seen in was rough). They may be as ugly as sin, but god they are comfier than an armchair wrapped in a duvet.

During what were supposed to be weeks nine to 12 of my schedule (the serious 50-plus miles a week bit) I ran very little. I had to spend my evenings during two of these weeks office hunting, moving office and then flat hunting. In the little time I had, I managed to squeeze in a couple of shorter runs, plus one 18-mile run before work. In week 12, I went on holiday. I know it was a stupid time to go, but I anticipated it as some relaxation and a bit of swimming for low-impact loosening and exercise. In the event, Moroccan tajine won out and I swam very little. In an effort to purge my guilt, I ran 20 miles on the morning after I flew back. Previous niggles were rearing their heads again – at 17 miles my knees started to feel worse than ever. My thigh muscles went from feeling like supple rubber bands to knackered car tyres. Dragging myself along began to feel like trying to drag a wardrobe across a muddy farmer’s field. The soreness of my legs, plus a mysterious pain in my foot all added up to a pretty miserable run-in to the marathon. The morning of the race arrived after a day of restful carb-loading.

Walking up London Road towards Preston Park with scores of other anxious amateurs introduced the all-in-this-together camaraderie that would characterise the rest of the day – a worried nod here, a shrug there. As a beginner, I started right at the back with the other amateurs. About 15 minutes after Steve Ovett had fired the starting pistol, we finally crossed the start line and made our way round the outside of Preston Park. I had my first experience of people shouting and clapping – very different to the solitary training and a massive boost. The narrow course made picking a path through the runners difficult at points, but mostly, the sense of occasion, the moral support of hundreds of equally-out-of-their-depth runners had me feeling better than OK; when I passed my parents on the Steine I gave them a chipper wave and a “See you at the finish!” This was about mile 14. Miles 15 through 19 were the ones I had been dreading the most – a run up Grand Avenue, through Hove to Aldrington and back. The niggles in both my knees seemed to coincide with this demoralising turn back on ourselves. Given that I had no idea where we were turning, the idea that this road may well go on forever didn’t seem so far fetched.

My knees were beginning to feel like they felt on that 20 miler I did in training, but I was determined to run through it. If I thought the Hove loop was bad, Shoreham power station had other ideas. Three-and-a half-miles around the yard would have been interesting under normal circumstances, but the lack of crowds and the bleakness of the landscape was just focusing my mind on the encroaching pain in my right knee. I began to develop a limp that was most unbecoming, not to mention annoying to maintain. My worry was compounded when I ran past a crowd of paramedics surrounding a guy lying rigidly in the recovery position, his eyes wide but petrified. I decided if I was going to finish intact I’d have to take a minute to let my knee recuperate. Walking was the one thing I did not want to do – it seemed totally against the spirit of the undertaking – but I walked about two miserable miles. I felt like I had the stamina to run and run – but the nuts and bolts had flaked out.

Getting back onto Hove seafront helped – I knew exactly how much further I had to run. I’d done it in training a hundred times, and walked it a thousand. By the time I passed Palace Pier, I had begun to focus on the white lines in the road. Pouring all my attention into watching the line appear and disappear along the seam in the tarmac got me through the last 1,500 metres or so – so much so that I ran past most of my whooping pals, and actually carried on running for about 40 yards through the finish before my brain explained to my body that it was actually allowed to walk again. Four hours 45 minutes was my time. Way longer than I had hoped, but I finished. I hobbled over to see my parents and a few friends. I was dazed and sore, and not over the moon about James taking my picture (see opposite), but I’d set myself a task, and completed it – albeit not in the dignified, athletic manner I’d hoped.

WAS IT WORTH IT?
I ran a marathon. Having a statement like that to back up what was a hugely out-of-my-comfort-zone experience makes it TOTALLY worth it, even sitting here over a week later with a still-painful knee. The training was as solitary and mentally demanding as the race day was crowded and physically challenging, all of which added up to something remarkable – to quote 1952 Olympic Marathon gold medallist Emil Zatopek, “We are different, in essence, from other men. If you want to win something, run 100 meters. If you want to experience something, run a marathon.”

FYI
• A marathon is 26.2 miles long – the point-two being added in order that the 1908 official Trial Marathon could finish in front of the Royal Box in Windsor
• 7,589 started the Brighton Marathon, including 50 who couldn’t get to international marathons due to the Icelandic volcano