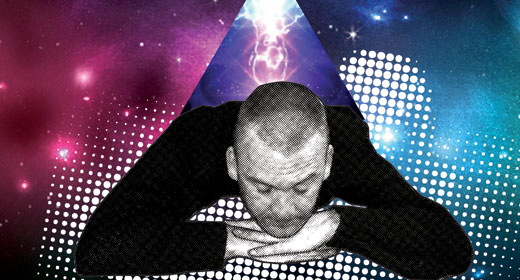 THE CONCEPT
Simple, we do stuff we haven’t done before and tell you about it in case you haven’t either. Nick Coquet is perhaps not the most spiritual of people, and laughs in the face of most moon-man philosophies concerning potential paths to enlightenment. Reiki would appear to be one such practice – the transference of positive energy through the hands of its practitioner? Really?

THE REASONS
SOURCE is only part of what I do for work. I produce and present a radio show and I design and maintain websites ­­- all working from home and all requiring something of a self-starter attitude. Not putting things off. Not watching Cash In The Attic. My failure in this has been constant and epic. Inherent laziness is not something a GP can prescribe for, there isn’t really a pill for pep and vim and vigour. But apparently Reiki could help, a form of complementary and alternative medicine. Where’s the harm in trying?

THE EXPERIENCE
I read up on it a bit. I’d imagined it was a Japanese tradition handed down through the generations over thousands of years, but it seems it was developed less than 100 years ago. That’s fine, so was Viagra and that works, apparently. I’m not ageist when it comes to mind mending. I remembered I’d seen various cards and flyers for this sort of thing in Neal’s Yard in the North Laine, so I went and picked a couple up. Sarah Keays is a qualified homeopath and Reiki practitioner operating at Seven Dials. I made my appointment.

Reiki can be done in two ways; hands on and hands off. Mine was to be performed with a hands-on approach, as this is the way Sarah was taught. Good. Cynical as I am, it seemed the more plausible method of getting some honest-to-goodness vibes inside of me. Hovering hands seemed an unlikely conduit for conversion. As, I have to say, did the distant healing I’d read about, where you stay at home and the practitioner does their thing from afar, apparently using specialised symbols of some kind. But I was determined to give scepticism a swerve for the time being – if I was going to convince myself it was hokum before I even began, it was unlikely to work really, wasn’t it?

I turned up for my appointment. Sarah was welcoming and at once calming to be in the presence of. The room was warm and comfortable, the music soft and tranquil. I didn’t have to to strip bare or anything, I just removed my shoes and lay on the comfy masseuse table thing. I’d explained what I was looking for help with, the whole work mojo thing. Homeopathy, with its mysterious little white pills, seems to be more about the physical ailment than the cerebral, so Reiki was the ideal answer – a more holistic gig working on mental, emotional and spiritual levels as well. Result! I felt like I had a glow about me, as if I’d had my soul massaged or something Sarah began at my head, placing her hands on me and seemingly summoning energy from some external source. Sarah’s hands moved down – neck, chest, stomach, hips. I think it’s something to do with focusing energy on my chakras or something, but I decided I didn’t really need to shine light in on magic – there was also the possibility that the more of that moon-man talk I heard the less I’d be susceptible to the Reiki at all. She certainly seemed to be concentrating on something, possibly harnessing something from somewhere. I managed to negotiate the chakra around my hips without embarrassing myself – hey, Sarah’s an attractive gal. But it wasn’t playing on my mind, I was trying to keep that empty of thoughts and worries so that it might become a vessel for some new and enlightened outlook on life. After what felt like not very long at all but actually timed in at around 45 minutes I think, I was done.

It was certainly a very relaxing experience, but like I said, I’m kind of lazy ­- I’m good at lying down doing nothing. I drank some water; somehow just lying there had dehydrated me more than would seem normal. I kind of didn’t want to ask when it would kick in – I didn’t think I felt any different. But when I got up to put my shoes on I almost keeled over. Again, a bit odd. On the way home, it was hard to know what to expect in terms of some revelation of spiritual enlightenment.There certainly wasn’t any specific eureka moment, but I have to say I felt pretty good as I drove home.

WAS IT WORTH IT?
Well, the strange thing is, the next day I kind of couldn’t wait to get cracking. A full inbox, usually a thing of dread despite its bill-paying workload, was zipped through, and my to-do list gave me a sense of purpose and worth. I got a real kick out of ticking each one off and actually did some pro-active stuff, you know – things people weren’t actually screaming for. Aside from work, I felt like I had a glow about me, as if I’d had my soul massaged or something. With traditional medicine, you can see it working. There are tangible results. Your broken leg heals, your rash goes away. Less specific and symptom-free ailments are obviously trickier to measure, but for days after Sarah did her thing, I really felt ace. It’s been a bit odd recounting the episode to people, what with my hearty suspicion of this sort of thing, but it worked. Reiki worked. There, I said it.