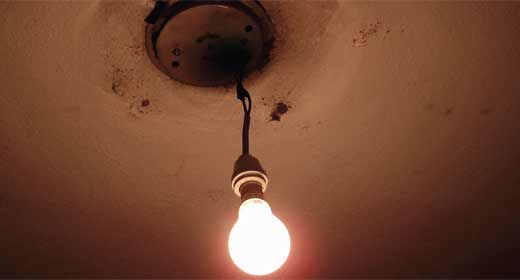 THE REASONS
I’m at a tricky age. I’ve realised that some of the daring and exciting experiences my teenage mind had conjured up as salacious possibilities were now destined to elude me forever. I’d never had sex with a prostitute, the cold and calculated exchange of cash for coitus. And with a modicum of nous, it shouldn’t be too hard to come by. Scan the local paper’s small ads and you’ll see we’re a city of muscular cripples. Well, we are if you take the plethora of massage services at face value. But in a small ads context, massage generally means “sex”.

THE EXPERIENCE
I phoned a couple of numbers from the paper. The receptionists were all older-sounding women, a far cry from the psychotic pimps from 70s movies I couldn’t help picturing. It turned out one of them was just round the corner from me. Who knew? I’d walked past it a thousand times, unaware of the nefarious goings on behind its shabby curtains.

I rang the bell with a shaky hand. Immediately the buzzer summoned me in, to be confronted by a security camera and another locked door. A moment later the inner door was opened and a middle-aged woman invited me in. “If you’d like to wait in there, the girls will be in shortly.” Sitting myself down on a dusty looking bed, perspiring quietly to myself, I reassured myself it was all for the noble cause of experience. A less conducive environment to arousal would be hard to imagine, however. No satin sheets, no mood lighting. A bare bulb hung starkly above the bed, as cold and uninviting as the trade it would illuminate.

The door opened and an Asian girl came in, squeezed into gaudy underwear. She smiled, pecked me on the cheek and introduced herself. With that she was gone. A second later, another similarly attired girl entered, left, then another, then another. Something for all tastes; young, older, slim, plumper. After the last girl had turned on her precarious heels, the receptionist returned and asked if I liked the look of any of the girls. “Er,” I managed. “Sophie?” She’d been the first through the door and the only one whose name I could now remember. We had a cat called Sophie once.

“SOPHIE!” she hollered into a back room. My chosen companion reappeared and invited me upstairs. It was an odd feeling following her upstairs, watching her bottom wobble in its g-string confines and knowing I was about to have sex with her. No drinks bought, no sparkling wit required. Just £50 worth of hard cash. There were three upstairs bedrooms; cackling and theatrical porn movie moans leaked from their thin walls. “In here…” said Sophie. She was actually quite cute, I thought, as I followed her into the room. I’d chosen vaguely wisely in my panic. “So, if you want to get undressed, I’ll be back in a minute.” She returned with a condom and some lube, which she applied with all the allure of someone wiping their arse in front of you, while I sat on the bed in my pants, my genitals shrivelling by the minute.

I confirmed that I was a 30-minute client. She explained there would actually be some massage, presumably for trade descriptions purposes, followed by oral ‘with’ and full sex ‘with’. A towel was laid out on the bed. Removing my underwear and placing it on the chair with the rest of my clothes, I assumed the position; face down. I opted for oil over powder, and did my best to relax. The massage was inexpert. “Does that feel good baby?” “Er, yes” I replied. I didn’t want to make a fuss at this juncture.

A few minutes of this and she asked me to turn over. I tried an encouraging smile to belie the cock draped apologetically across my thigh. She yanked it about a bit until it reached a workable state of tumescence, and then rolled the condom onto it with her mouth. “You like oral, baby?” she enquired. “Er, yes,” I replied as brightly as I could. Oral was duly performed, somewhat amateur oral given Sophie’s profession and all. Still, you can’t argue with the laws of physics, and after a little while I was deemed ready for the plunge.

Still lying on my back, Sophie turned round and mounted me, bent over so her head was at my feet. Her anus stared accusingly at me as she worked up and down, quickly building speed, seemingly in an effort to get the procedure over as quickly as possible. As she worked, Sophie punctuated her moves with theatrical moans and questions; “Oh baby, is that good baby?” and the like. “Er, yes” had become my stock response.

I came, Sophie pretended to. There was no cuddling or spooning. She got up immediately and gave herself a thorough going over with some intimate wipes as I dressed. Like you’re compelled to do with cab drivers, I asked if she’d been busy. She told me I was her fourth today. It was almost lunchtime.

WAS IT WORTH IT?
As an experience to chalk up on the blackboard of life, sure, why not? But as any kind of representation of what sex is all about, it’s cold, it’s unemotional, and it’s ultimately just a bit depressing. You leave with a desperately empty feeling inside. Anyone who develops a habit of it has my deepest sympathy.

PROSTITUTION FACTS
– In Britain, prostitution isn’t illegal if the prostitute works independently without disturbing public order.
– It’s a crime to advertise, run a brothel or recruit for prostitution.
– 80,000 women currently work as prostitutes in Britain.

LETTER TO THE EDITOR

Following this controversial article we received a letter putting forward the other side of the picture:

Dear Sir,
I was disturbed and greatly saddened to read an article published in The Source this month entitled ‘Prostitution’, and felt it necessary to write in response.

I work for a charity that works to support both women who have been trafficked to the UK for the purposes of sexual exploitation, and women and girls involved in prostitution. We offer a number of services including a drop-in centre, 1:1 support, outreach to brothels in partnership with Brighton and Hove Police, and we offer exit support alongside harm reduction support.

One of the things I found most unsettling about your article, aside from the obviously unsavoury nature of your ‘concept’, was the fact that it made no reference to the woman other than in a derogatory and callous manner. Whilst I was pleased to read that Mr Cox did not glorify the experience, he did not give a balanced perspective of prostitution, which given the fact that this article will be read by numerous people, I have to say is very irresponsible indeed. This only serves to convey the message that going to an illegal brothel is in fact acceptable, and should be encouraged (and I quote) ‘as an experience to chalk up on the blackboard of life’.

Too often, men talk glibly of visiting prostitutes as though it’s something all men should experience at least once. They give little thought to the issues surrounding it, choosing to remain ignorant to the dark, seedy, violent and damaging reality of prostitution. It is my belief that men need to start taking responsibility for their contribution to the sex trade, and educate themselves about the cold, harsh truths of the world of prostitution. Purchasing sexual services from a prostitute can mean that a ‘punter’ is, amongst other things, supporting the illegal drug industry, contributing to the rise in sexually transmitted infections, and perpetuating a situation whereby women are subject to exploitation and violence.

Men easily come up with all sorts of mythological justifications to make themselves feel better about using prostitutes, such as ‘it’s the oldest profession’, ‘prostitution prevents rape’, ‘men need sex’, ‘women enjoy it’, and ‘it can be made safe’. Please note the word ‘mythological’. As Julie Bindel, journalist and campaigner notes ‘Yes, it has been with us for a long time, but so have poverty and racism. We do not hear governments declaring that “racism is here to stay”….’

Here, therefore are some real facts for you to digest Mr Cox and co.

Prostitution has, and always will be extremely dangerous and violating for the women involved. Not only do they have to endure numerous acts of violence and sexual harassment, which quite frankly can only be termed as abuse, but the fact that women are treated as a commodity to be bought and sold for the pleasure of men only serves to perpetuate their subordinate position in society. Violence is a ‘normality’ for working women, especially those who are pimped. Why on earth would you want to contribute to this?

You may be interested to learn that many women enter prostitution as children (under the age of 18). Whilst the age of sexual consent is 16, paying for sex with someone under the age of 18 is a criminal offence and the man is therefore guilty of child abuse.

I’m sure that one of your arguments is likely to be that it’s the woman’s ‘choice’ to be a prostitute. Yes, on a very simplistic level it is her choice to lay there and be pawed at by scores of men, day after day, night after night. However, I would argue that it’s a choice out of no choice in the vast majority of cases, with a whole host of reasons holding women in this destructive cycle leaving them unable to exit easily.

I support and promote the model in force in Sweden whereby whilst selling sex is not illegal, buying it is. This has sent a clear message to the next generation in Sweden that women’s bodies are not commodities to be bought and sold. Illegality contributes to non-normalisation, which results in a decreased probability of men paying for sex. It has also resulted in the reduction of trafficking into the country in comparison with countries that have legalised or decriminalised prostitution.
I do hope that this letter has given you a little more insight into the issues surrounding prostitution, and perhaps give you reason to think about things in a little more depth before embarking on such damaging ‘missions’.

Whilst a response is not entirely necessary, it would be nice to know that you have received and read this. I would also really encourage you to give thought to the idea of publishing a follow-up article to give a voice to the women involved in prostitution.

Sometimes an article is a bit of a team effort, and those are tagged SOURCE Writers. If you’d like to be part of that team, hit the Contact link at the top and get your work on this website.
← PREVIOUS POST
Street Style: Jack
NEXT POST →
Secret Eater: Bom-Bane's
Mailing List
Recent Posts
Website developed in Brighton by Infobo
Copyright © Brighton Source 2009-2020
Source Virgins: Prostitution - Brighton Source