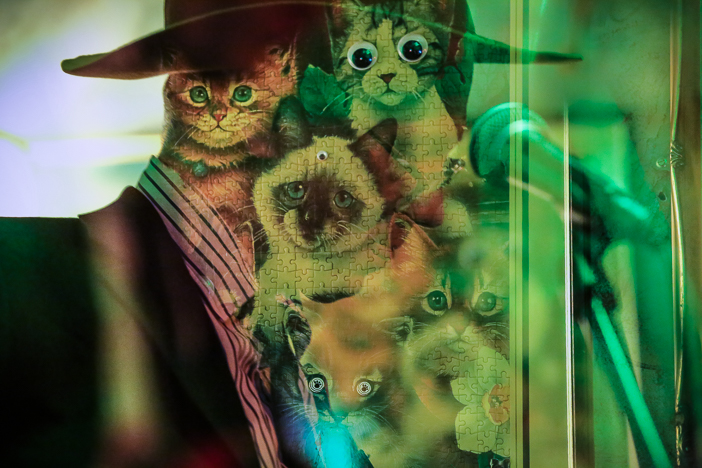 Street Source is a regular feature showcasing photos taken in Brighton. The idea is to share spontaneous moments around town – be it incidental street scenes, snapshots of people’s lives or images of the city as a landscape. Each month we ask a photographer to participate. During October Jo Higgs was out and about at gigs pointing her camera anywhere but at the stage.

My name is Jo and I take photos of just about anything but I mainly concentrate on music photography. I don’t live in Brighton but spend a lot of time there taking pictures of gigs and it’s the shots during the sets that normally get posted somewhere. For this little series, however, I thought I’d focus on the scenes before, between and after the playing at four recent events, the people involved, the punters and environment. 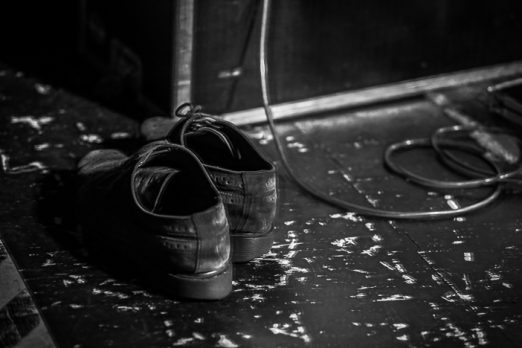 The shoes of Karl (of Brighton-based The Emperors Of Ice Cream) on stage while the band are playing their socks off. 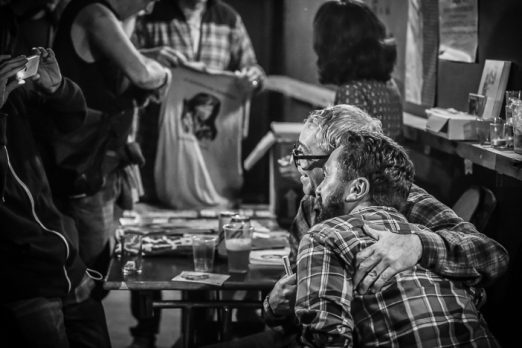 Mike Watt is always happy to pose alongside his fans for numerous snaps. 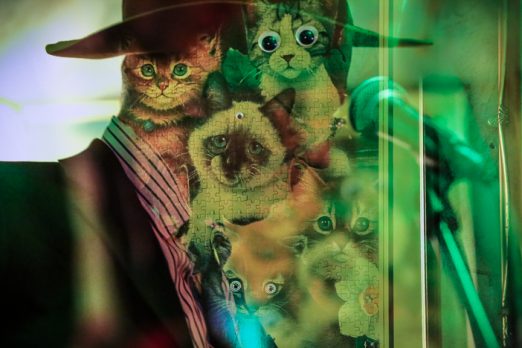 The cats inside The Hope & Ruin taking over Ben Wallers aka The Rebel. 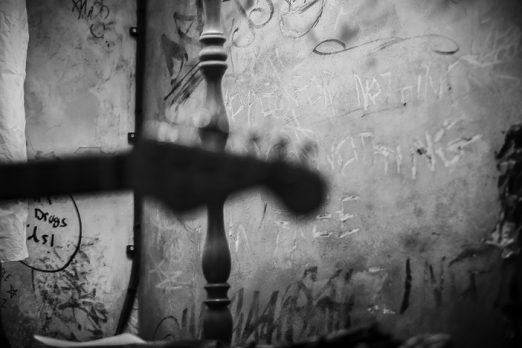 The writing is on the wall of the Hope’s downstairs bar. 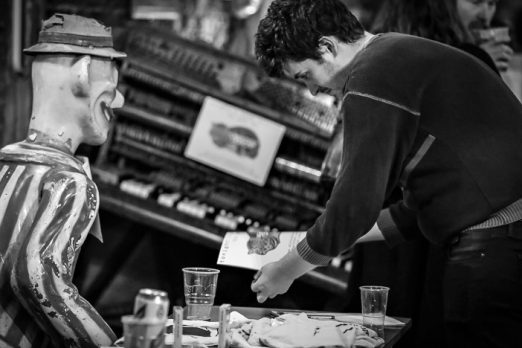 Clownesque punters and skew-whiff pianos; it’s all in a day’s work for promoter Tobi of Dictionary Pudding. 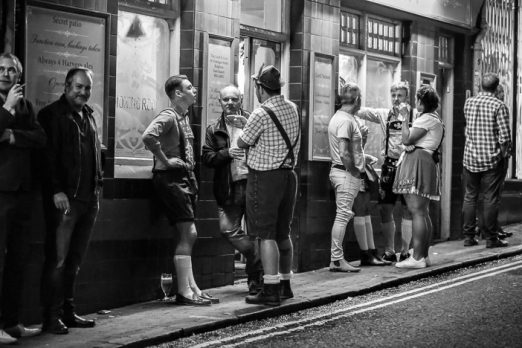 Oktoberfest has taken over Brighton. These Bavarian-like Brightonians were seen outside the Lord Nelson on our way up to the Green Door Store. 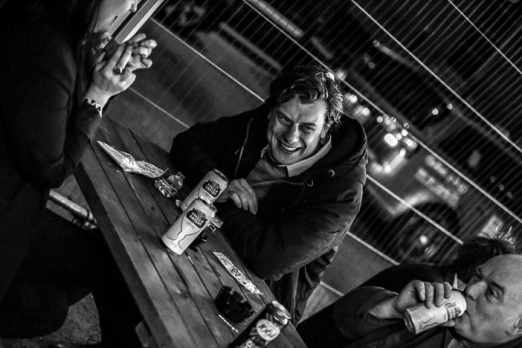 Fliss and Andreas of The Nightingales chilling outside with Ted Chippington who opened the evening with some stories about slugs. 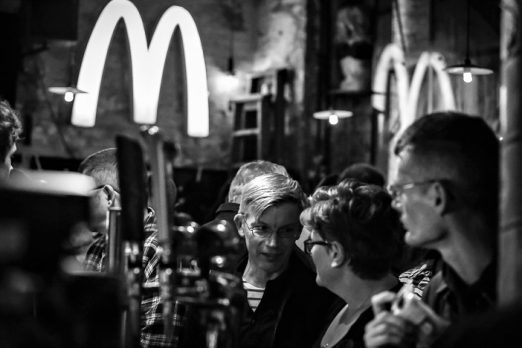 Not McDonald’s but punters at the Green Door Store waiting to get a pint at the bar. 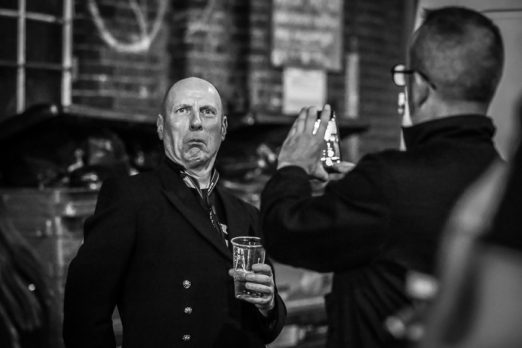 Svor Naan, saxophonist of punk band The Cravats, posing for a fan after the gig. 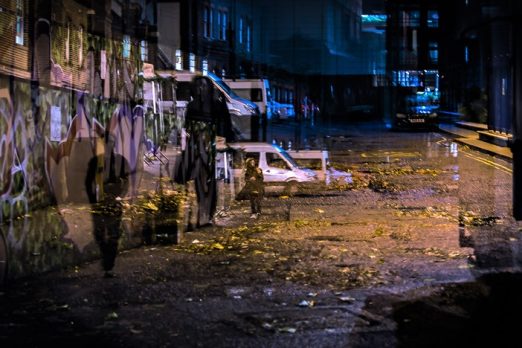 While walking back up to the Green Door later in the month to see Murder Boys, Casual Nun and Mugstar play it was getting clear that Autumn was here as we made our way scuffling through fallen leaves. 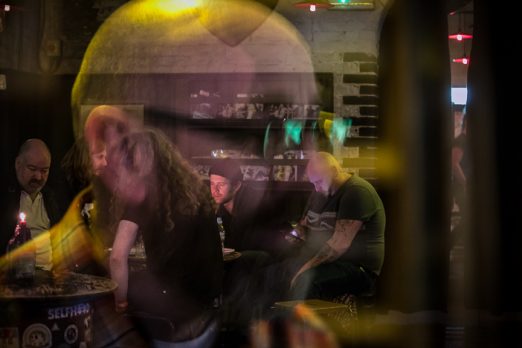 Promoter Colin alias Papa C selling tickets for the show while the band Mugstar are having a drink in the bar before their performance. It’s early evening yet and punters are on their way. 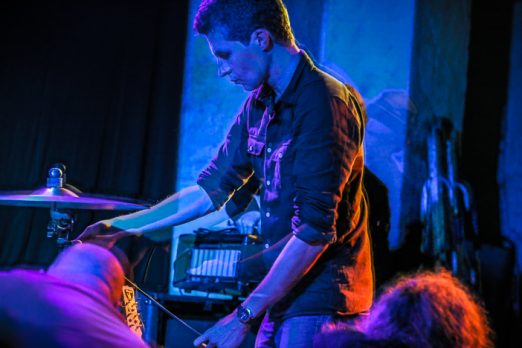 After the show the crowd slowly leave the venue but for the band and the sound engineer there’s still a fair amount of work to be done. It’s not always glamorous but it’s definitely a labour of love.

Words and photos by Jo Higgs

Sometimes an article is a bit of a team effort, and those are tagged SOURCE Writers. If you’d like to be part of that team, hit the Contact link at the top and get your work on this website.
← PREVIOUS POST
The Horrors Review
NEXT POST →
RTS Zine Fair, Sat 2nd Dec
Mailing List
Recent Posts
Website developed in Brighton by Infobo
Copyright © Brighton Source 2009-2021
Street Source No.20 - Brighton Source