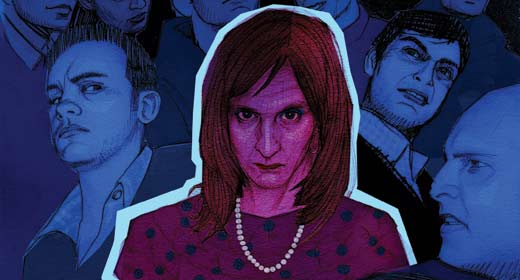 THE REASONS
Brighton is famed for being a tolerant place as well as the UK’s spiritual capital for the LGBT community. We see L, G and indeed B all over the place – but the transgendered amongst us seem to keep a lower profile. Are we as accepting a city as we all like to think? No one stares at couples of men or women holding hands anymore, but those for whom sexual reassignment is the only option for happiness are required to live life as their intended gender for some time before surgery can be considered. During that time, a man can take steps to develop breasts, deplete his body hair and may also resort to facial reconstructive surgery to soften the features. But for everyone embarking on all of this, there is a day one. A day with a close shave in the morning and the hope of no close shaves during the day. A day when, ultimately, you look like a man in a wig and a frock, going shopping.

THE EXPERIENCE
To start with, I wanted to make a distinction between what I was doing and drag. Drag screams “look at me!” whereas I wanted to just melt into the background, to just be another anonymous Brighton resident. I dressed conservatively – a nice flowery silk dress, black tights, black heels. a padded bra and a wig. I shaved off my sideburns and the top of my chest hair, and applied some subtle make-up. Leaving the house with my black clutch bag, I felt very vulnerable and self-conscious. Walking to the bus stop into town, I passed a building site and received my first stares of the day. It was hard to tell whether men on scaffolding are staring because your tush looks cute (I have to say, it kind of did) or because they know your secret. Either way, no comments were thrown. Or bricks.

At the bus stop, I instinctively avoided eye contact. Quentin Crisp offered this advice in The Naked Civil Servant: never make eye contact, never speak unless spoken to. It seemed pretty sensible. A couple of women were waiting with me. They looked up as I approached, entirely naturally, and then did a kind of cartoon double take before looking away hurriedly. These didn’t look like particularly sophisticated types, yet I could hear from their conversation some yards away that they didn’t really give me another thought. Nor did the bus driver, when I softly asked for a ticket into town. As I tottered through the bus to the back seats I got the double takes again. I suppose I’ve been guilty of this myself in the past, it’s interesting to look at passers-by and when you see someone whose appearance doesn’t match your predetermined expectations – a big lumpy face or a burn or something, you can’t really help yourself. I’ll look away quickly, you think, they won’t notice. No harm done. But when literally everyone’s doing it, you certainly do notice.

As I alighted I made my way up North Street, down West Street. Where better to test tolerance than a Wetherspoons? Cheap beer, cheap grub, cheap punters. A gaggle of smokers crowded the entrance as I sashayed through the door and made my way to the bar. In a concession to feminism I ordered a G&T, again with eyes lowered, again with the softest of tones. I handed over my fiver, my red, false nails looking plainly out of place on my big man hands, and sat by the window. The tables were all full, early liveners being sunk at every one. Sat facing the throng with my legs crossed, my heels dangled from their stockinged ankles, I studiously avoided catching the obvious looks from every quarter. As I sipped, ice cubes clanking, most went back to their conversation. A few girls, all scraped back ponytails and tracksuits, clearly only had me on their minds though. Still, no one said a word.

As I drained the last of the gin, my man bladder called to me from beneath my frock, so I did what any self-respecting lady would do. I hobbled between the tables and down the stairs to the ladies for a sit-down visit. Luckily they weren’t packed with people doing their make-up, but there were a couple of loiterers around as I closed the cubicle door behind me, but they appeared not to notice or care. The ladies looked a lot cleaner than the gents usually do – ladies are so demure; they don’t piss all over the floor. But they do take a massive dump and don’t flush though, apparently.

By now my reserve had deserted me somewhat. This wasn’t nearly the arduous experience I’d imagined. As I left the pub, again with my passage lit by the wide eyes of the congregation, my trepidation was largely gone. Back down through North Laine, I pottered, I window-shopped, I bought Mother’s Day cards. At the bus stop waiting to go home, I peered through my Max Factor lashes at the route maps (I’d usually walk but my heels were killing me), leaning over seated pensioners as I did so. They were staring at me, but so what? Let them stare.

WAS IT WORTH IT?
Absolutely. I’d suspected Brighton might not live up to its reputation of benevolence to all, especially in its most ardent lager-sinking quarters, but my fears were totally groundless. I’m not very androgynous and it was patently obvious that beneath my slap I was male, but to the many passers by whose gazes I locked onto, I was just another part of the city – varied, colourful and the best place in the world to live.