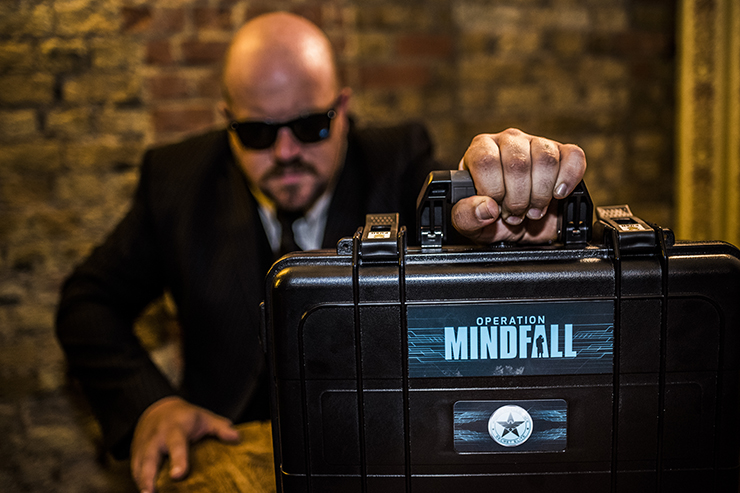 Can You Save Brighton From Bioterrorists?

There are few better ways to spend a Sunday afternoon than saving Brighton from a bioterrorist attack. Operation Mindfall is a new interactive game that takes you out on to the city streets, armed with an iPad and a box of gadgets, to thwart a shadowy organisation known as SpiderTech. For Machiavellian reasons of their own the terrorists have decided to poison Brighton’s water supply and only a group of inept punters can stop them.

Handmade Mysteries first introduced us to escape room games when they brought their Victorian puzzler Last Chasity’s Reserve to the Black Lion (it’s now at the World’s End). This time they’ve expanded the format with a spy thriller theme and a series of outdoor missions that had us roaming the Lanes in search of clues.

Like every good adventure, it starts in a pub. Upstairs at the Walrus on Ship Street you’re given a mission briefing by Agent X, acted out in-character with suitably posh pronunciation. You’re then handed an ‘action pack’, a chunky black suitcase containing various gizmos, along with a burner phone and a customised iPad. After that, it’s up to you.

The game lasts two hours, and throughout it the timer is ticking. The iPad’s GPS leads you to nearby locations where a variety of tasks await. Usually you’ll be solving a puzzle, taking a picture or inputting some data deduced from your surroundings. The observational elements are fun and they’ve pitched the difficulty of the puzzles perfectly. However, it’s less of a straight-up escape room and more of a hi-tech treasure hunt.

When SOURCE undertook the mission we were kept on our toes with news that we were being tracked by an enemy agent, but the biggest hindrance were actually the tourists crowding the streets. Move aside, secret agents coming through! Though we found ourselves suspiciously eyeing up every idle bystander, we were disappointed to find the showdown with this adversary was left hanging. However, there’s some impressive AR visuals towards the end which makes for a satisfying finale.

Operation Mindfall is ideal for groups of five and runs every Friday, Saturday and Sunday. Like the tourists, the terrorists are back again every weekend. And it’s up to us to keep saving the city. Luckily this war on terror can be combined with a leisurely stroll around town and a well-earned pint.

Ben Bailey is the editor of Brighton Source and a freelance writer. He also plays in a few bands and can sometimes be found giving talks on a variety of niche topics. He lives in Brighton and rather likes it.
← PREVIOUS POST
Molly Sarlé , Friday 30th August
NEXT POST →
Dog Of Man Set To Launch Interactive Album
Mailing List
Recent Posts
Website developed in Brighton by Infobo
Copyright © Brighton Source 2009-2021
Can You Save Brighton From Bioterrorists? - Brighton Source