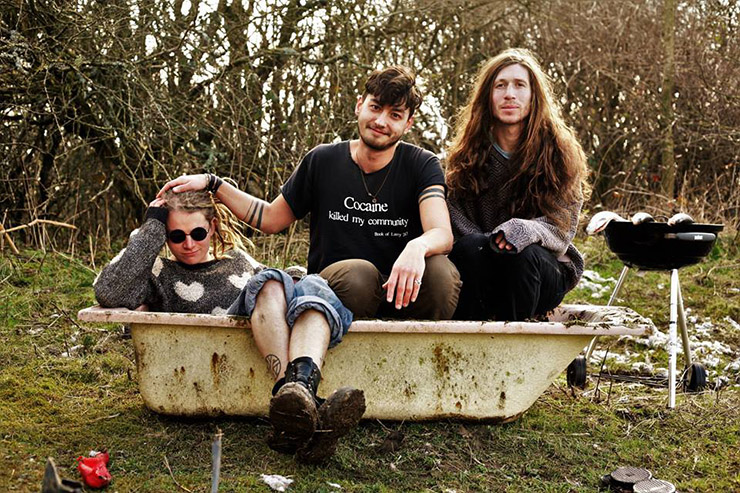 Brighton’s premier accordion-synth-led, grungy weirdo folk-punks Dog Of Man are as creative with their marketing as they are with their music, it transpires. You’ll know this already if you’ve seen the funny spoof YouTube reaction video they recently put out, to promote their upcoming “interactive” album ‘Dogmatic Manual’. (If not, watch it here.)

So the album’s interactive, you say? How so? Well, they’re putting tracks out on Facebook, one at a time over the next several weeks. And listeners will be able to vote to affect the flow of the album, determine the track listing and unlock bonus videos en route.

The first instalment, the hugely creepy video for ‘Opiate’ (shot by James Van Vliet), landed on July 3rd, with a new video and public poll following on subsequent Wednesdays.

The lead single from the album is called ‘Wedding Night Erection Failure’, a title virtually guaranteed to ensure its place on the Radio 2 breakfast show playlist and in the top ten of the festive Hit Parade.

Singer and accordionist Mike explains the track’s layers of nuanced symbolism as: “The manifestation of our deepest fears of working really hard at something only to screw it up at the pinnacle moment.”

Let’s hope there’s no performance anxiety at the launch party then. No pressure, lads.

The launch party is at The Hope & Ruin, Brighton, on August 16th, with Town of Cats and Buffo’s Wake.

A magazine journalist and former BBC minion, Gaz's words can be found in publications ranging from The Radio Times Guide To Films to 1001 Songs You Must Hear Before You Die, as well as on his blog The Wine Ninjas . He plays drums in a psych band, and once fell into a frozen lake in Transylvania.
← PREVIOUS POST
Can You Save Brighton From Bioterrorists?
NEXT POST →
Inside Brighton's Housing Co-ops
Mailing List
Recent Posts
Website developed in Brighton by Infobo
Copyright © Brighton Source 2009-2021
Dog Of Man Set To Launch Interactive Album - Brighton Source