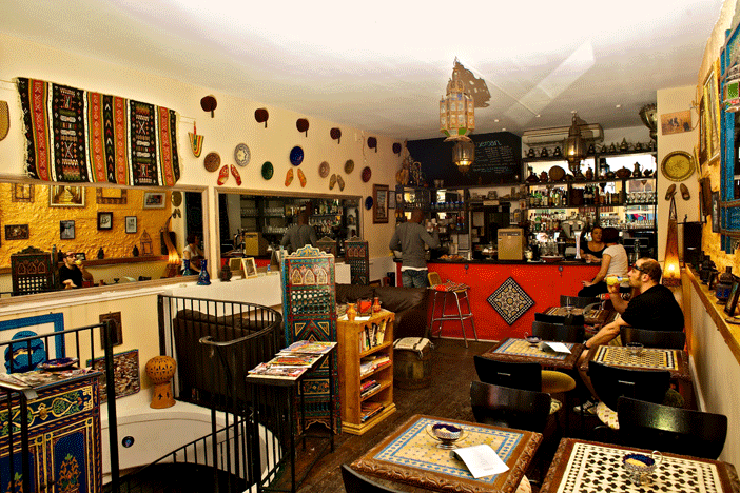 The Blue Man
Brighton is hardly overrun with African eateries so it was with sadness that The Blue Man quietly closed its doors a couple of years ago. But now it’s back in the new two-floor venue on Queen’s Road that used to be The Red Rooms. The idea is that you can pop in for a drink or tapas, or try the daily tagine cooked by Magid, a man who knows his way around North African cuisine. There’s a late licence and live music, so pop in after the pub and enjoy an easygoing drink or two.

Traumfrau
This new monthly club night at the Tube is aimed squarely at “queer girls and their friends”, with a more interesting, intellectual stance than the camp 80s pop nights Kemptown has to offer. If the queues at the last one are anything to judge by, it’s just what Brighton’s been waiting for. It’s inclusive and friendly, with zines, colour-in posters, stickers and a photobooth as well as eclectic music. Traumfrau means ‘ideal woman’ and this is the ideal place to find her.

The Rug Hour
If, like us, you often reminisce about the lost time you spent with a moustache and sizeable chest wig, supping brandy and chomping cigars, we’ve found the solution. There’s a new night at Sticky Mike’s called The Rug Hour, and it promises pretty much the sleaziest fun you can have on a Wednesday without paying.  The music policy is as easy-going as Ron Burgundy on Valium, and silk dressing gowns are encouraged.  If you can’t behave, be careful.

Starvin’ Marvin’s
It’s been knocking about for a couple of months, but this grub stall by Churchill Square is beginning to be recognised as one of the best central lunch havens in Brighton. Starvin’ Marvin’s offers a wide range of baked goods, sandwiches and more dough-based delicacies, with discounts for local businesses. Famed for its saliva-inducing hog roast baguette, Starvin’ Marvin’s is a deli food bar worth checking out.

Work
Riki Tik have launched their new weekend nights with the emphasis being on the cream of Brighton talent. The theory goes, why book one good DJ from the national/international circuit when you can get two great DJs from your doorstep? Hard to argue with that, eh? Work is the name of the Friday night, with Matt Barker and Dennis Castro toiling behind the decks, making you work it with their party targeted “blog dance and jiggy bangers”. So after work, get to Work.

Sussex Wine School
If your appreciation of wine doesn’t go beyond two-for-a-fiver vials of vile vino, stop reading now. If it does, and you fancy yourself as a sniffer, swiller and spitter, the Sussex Wine School could be right up your alley. The Plateau French restaurant in town is hosting Sussex Wine School’s tastings and teachings to help you impress dates with your corking booze knowledge. This is the latest in a nationwide network of wine schools, so catch up, swot up and sup up. Sussexwineschool.com has all the facts you require.

Pressed Sessions
Pressed Sessions is a new live music night at the Green Door Store that aims to raise musicians’ profiles by making films of their performances. The brainchild of artist-run company Ugli Music (who also offer sound system rental, studio help, tuition and more), the professionally recorded shows will be hosted on pressedsessions.co.uk and other sites favoured by the featured bands. Pressed Sessions launches on June 5th, with Annaca, Time For T, Jenna Bennett and Saharas playing live.

Sometimes an article is a bit of a team effort, and those are tagged SOURCE Writers. If you’d like to be part of that team, hit the Contact link at the top and get your work on this website.
← PREVIOUS POST
Art: Up and Beyond
NEXT POST →
New Club FunFair Opens In June
Mailing List
Recent Posts
Website developed in Brighton by Infobo
Copyright © Brighton Source 2009-2020
New in Town, June 2012 - Brighton Source