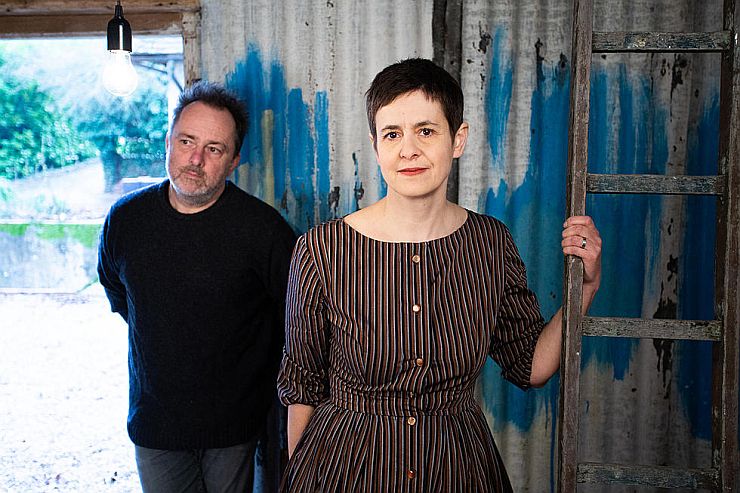 There’s something special about an afternoon gig; well, given the past year any gig is to be relished. However, getting up late, a spot of lunch, then shuffling into a favourite venue to see some bands, knowing it will still be light when you leave is a great feeling. Bizarro Promotions know this and have arranged a trio of top-notch indie artists to entertain Brighton’s gig-starved punters.

If you’ve read this far you’ll want to arrive early as headliners Rob Pursey and Amelia Fletcher are involved with openers European Sun whose lo-fi, Velvets-tinged songs are written and sung or spoken by Steve Miles.

Catenary Wires’ forthcoming album ‘Birling Gap’ shows the East Sussex landmark’s coastline on the cover and many musical beauty spots can be found within beginning with the sweeping, psych-folk opener ‘Face On The Rail Line’. There’s a country & western flavour to ‘Three Wheeled Car’ and the album is full of sweet harmonies, bittersweet lyrics and irresistible earworms, none more so than on ‘Always On My Mind’ with its Sunshine Pop arrangement and ‘Mirrorball’ which tells of two lonely singletons deconstructing an 80s disco and ingeniously namechecks Jason Donovan and Wah Heat.

Rob and Amelia are indie-pop royalty from their previous groups Talulah Gosh, Heavenly, Marine Research and Tender Trap (plus Amelia’s guest vocals with The Pooh Sticks, Wedding Present and Hefner), so it’s little wonder that this album is packed with well-crafted and perfectly executed gems. Augmenting the duo are keyboard queen Fay Hallam, much loved by the modernist soul brigade, former Paul Weller bassist Andy Lewis and drummer Ian Button who played in Thrashing Doves and Death In Vegas.

Sharing top billing is Pete Astor, another key component of the C86 era from his time with The Loft and The Weather Prophets. His latest album ‘You Made Me’ is an eclectic selection of covers including takes on Gen X’s ‘Dancing With Myself’ and Villagers’ ‘Courage’ alongside interpretations of classics by John Martyn, Cat Power, Elvis and many more.

With a line-up of this calibre it’s sure to sell out so don’t sleep on this one.