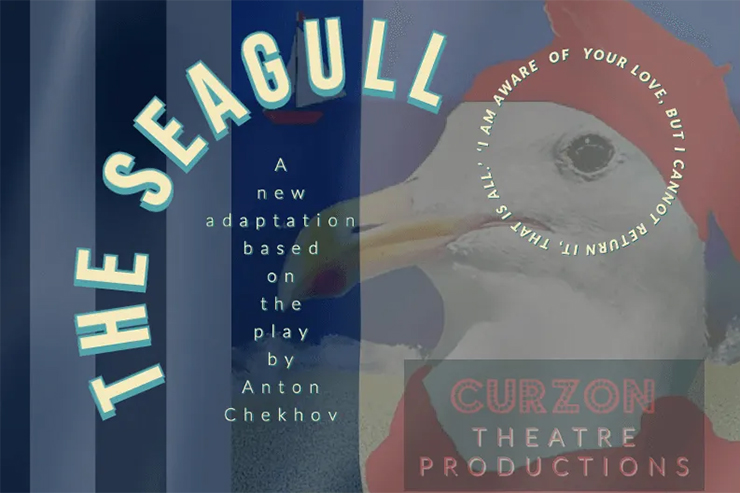 We’ve just got a new theatre company in Brighton. And what’s their first production? ‘The Seagull!’ Well, that’s nifty product placement for a city swarming with those aerial beasts!

But Curzon Theatre Productions is definitely a serious set up. They’ve opened a new venue above the Curzon pub in Rock Street, Kemptown. And their production of Chekhov’s four-act play jumps in at the deep end. This is quality theatre in an intimate space.

Chekhov is certainly no easy peddle downhill for any theatre company. Despite the play having been written at the end of the 19th century, it’s modern and very nearly postmodern. There are no great heroines or heroes. The characters’ lives seem ordinary, inconsequential, petite bourgeoisie. At times they seem to openly question the format of the drama. “Your play is very difficult – there is so little action,” remarks one of the characters wryly.

There is a cast of ten who between them represent roles such as a housekeeper, maid, estate manager, teacher, author and actress. We are treated to a play performed within the play which provides opportunities for the cast to question the tropes and structure of the drama.

In this adaption, Robert Tremayn (director) and Eva Malyon (production assistant) have moved the play’s location from Russia to southern France and shifted the epoch to the appropriately decadent late 1920s. This provides the exquisite opportunity for splicing in a home movie of the cast rowing around a lake with white dresses or black trousers. They make fake holiday poses at the jerky camera. An older woman is reading Maupassant on the boat. Bird song in the garden enhances the drama. Subtle lights and sound.

The diction is clear across the 10-strong cast with no swallowing of words despite some complex and long speeches. At times the characters make fun of the play. They are “pretending to be inaugurating a new kind of theatre,” says one actor dryly. Another shouts: “But when will the play begin!”

Sometimes the characters do not flicker when accused or attacked. They stare forward into space. “I’m 40. I can’t change,” says one. Another character has a play yet to be finished. One woman cannot understand what another is saying. Someone wants love, another seeks fame. Towards the end, Treplev sums up his existential angst: “You’ve found your road and know where you are going, while I still drift about in a maze of dreams and images…”

Looking ahead, the Curzon Theatre company aims to “make classical theatre more accessible to a wider audience using different mediums,” according to Robert Tremayn. This aims to include “livestreamed performance and dinner-theatre.” Coming up next will be ‘The Haunting Of Hill’ in November 2021 and “presenting work by LGBTQ+ practitioners to celebrate Pride next year.” There will also be plenty of weekly events.

Robert Tremayn saw ‘The Seagull’ as a chance to present Chekhov with an “entirely fresh feel and find the comedic elements.” We certainly got that.

This is classy theatre that’s lively, serious and intimate.

Mike lives in Brighton. This is a full time occupation. He's also a researcher, writer and activist. Any time left over he spends hanging around cafes and pubs listening to people on their phones. He loves theatre that pokes into difficult places. You won't find him on Facebook.
← PREVIOUS POST
Titania McGrath
NEXT POST →
A Brighton Afternoon With Catenary Wires & Pete Astor, Sun 12th Sept