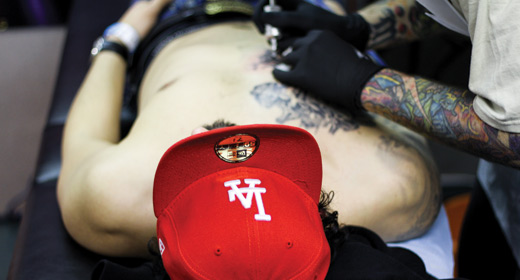 With as many as one in three British 16-44 year olds reportedly having gone under the needle, the Brighton figure must be, well, pretty much everyone. So it’s fitting that the emerging premier opening fixture on the European tattoo convention calendar should be here, arriving in town for the fourth time on its biggest outing yet.
Competitions, live music and entertainment, food and bars make it a tip top tatt day out, and there’s a free Brighton Rockabilly Rumble after party at the Concorde. More than 150 artists will be pushing ink, from local names like Into You, Magnum Opus, Nine and Angelic Hell, to stars of TV’s London Ink and a host of international specialists. Many normally have ages-long waiting lists, so a pre-booking here could be your chance to jump the queue. Here’s some names to look out for.

PHIL KYLE
Proprietor of Brighton’s Magnum Opus, Phil is your archetypal old school tattooist and a real ambassador for the art. He’s equally at home on TV, the international circuit or inking here by the sea – tattooing for Phil is not something that stops at the skin-deep.

JIM MCAIRT
An artist we can personally recommend, Jim is a south coast legend whose reputation spreads all over the world. A founder member of the Into You Brighton team, he’s an experienced and spiritual artist and a real guru to those he’s helped along the way.

DAN GOLD
Known as the trilby-hatted troubador of London Ink, Dan now runs Skunx Tattoo in London. His work is distinctively colourful, with a trademark graffiti-style undertone to much of his widely-admired folio.

JOSE LOPEZ
Lopez is a real coup for the convention. His Lowrider studio in LA is probably the best exponent of the urban black and grey style, with intricate layering and shading that lends the work an eerily photographic nature.

ROBERT HERNANDEZ
Another world-renowned artist for whom realism is a trademark, Robert Hernandez plies his trade of dark and sinister work at Vitamin Tattoo in Spain, his own studio for the last decade.

NICOLE LOWE
From Auckland via scene stardom thanks to London Ink, Nicole’s reputation has been built on her ability to tackle any style of tattooing and make it her own – from Japanese to tribal her book is a definitive how-to of the art.

Sometimes an article is a bit of a team effort, and those are tagged SOURCE Writers. If you’d like to be part of that team, hit the Contact link at the top and get your work on this website.
← PREVIOUS POST
Street Style: Polly
NEXT POST →
Preview: Vive La France! 2010
Mailing List
Recent Posts
Website developed in Brighton by Infobo
Copyright © Brighton Source 2009-2020
Preview: Tattoo Convention - Brighton Source