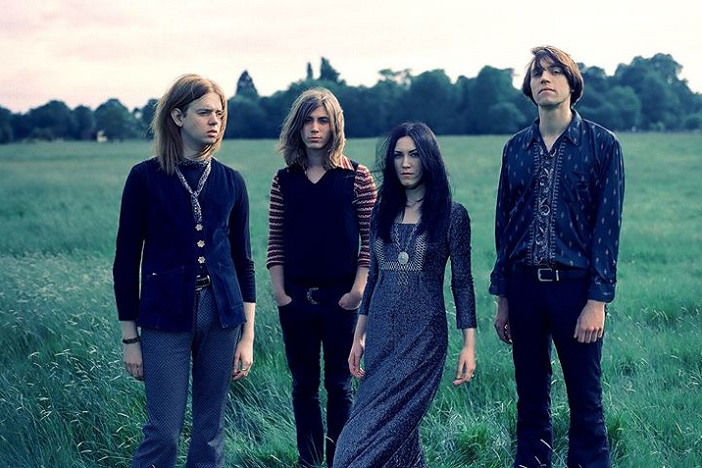 Rosalie Cunningham – formerly of garage popsters Ipso Facto, now of critically acclaimed prog freakadelic outfit Purson – seemingly inhabits the three stages of the triple goddess deity simultaneously. In age, she is maiden. In the control of her band (through numerous line-up changes), being songwriter and multi-instrumentalist, sometime sewer of the band’s clothing, she is mother. By investing time and energy channelling influences such as Black Sabbath, The Small Faces, and the Beatles, she is crone, using wisdom to create originality in the output, rather than mere derivation.

You can watch the witchcraft ignite as Purson pay a visit to the Hope & Ruin mid-UK tour before hitting the US and releasing the follow up to 2013’s ‘The Circle And The Blue Door’. Purson offer melodic, occult psychedelia for gig goers to groove to, something we imagine will especially be a hit with attendees of Komedia’s Eight Miles High club night. This show will doubtlessly prove to be both carnivalesque and mesmerising, and you may even find yourself on a mission to raid To Be Worn Again for paisley and flares the next day.

Karen has been living in Brighton since 2010, where she rediscovered a love of music. And bars. And clubbing. She currently works three jobs to pay for these pastimes. When not writing or working or falling over, she can usually be found stuck in a book.
← PREVIOUS POST
The Last Shadow Puppets, Wed 30th March
NEXT POST →
Blanck Mass, Wednesday 30th March
Mailing List
Recent Posts
Website developed in Brighton by Infobo
Copyright © Brighton Source 2009-2020
Purson, Sun 27th March - Brighton Source