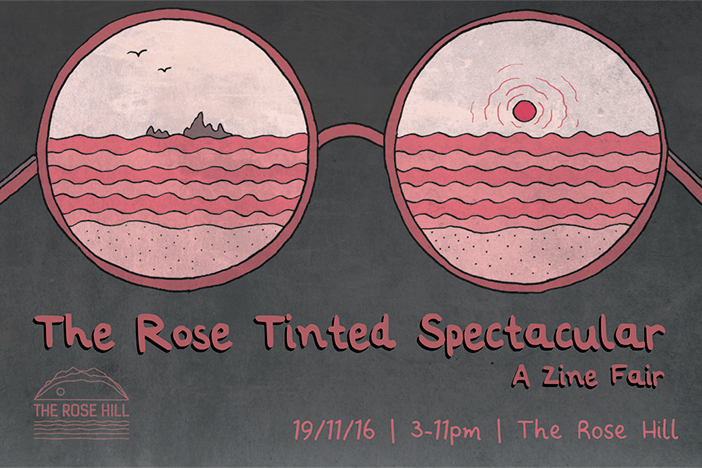 Not so long ago you would have been reading this on paper, ready to turn over or toss it aside rather than aiming for the back button. We’re all aware of the benefits of digital media, but we rarely pause to consider what we’ve lost with older formats. Is it only people of a certain age that occasionally hanker for something tangible?

Stallholders at The Rose Hill Tavern will find out on November 19th when the recently opened community arts pub hosts a zine fair promoting and showcasing small-press publishing in all its hand-drawn, papery splendour. A dozen or so artists and writers will be setting up shop for the day, selling homespun publications full of illustrations, stories, poetry, comics and good old rants.

“I do think there’s been a bit of a resurgence in zines, or at least they’re having a bit of a popular moment,” says Adam Moore, one of the organisers. “Didn’t Kanye West release one a while ago? That’s definitely a sign that a bandwagon has been deemed jumponable.”

“I feel like zines offer a much more personal experience than a blog. So much of our interaction now is done online with a level of detachment. There’s something really rewarding in seeing a smile on someone’s face as they look at your work that can’t really be replicated online (unless you linked your website store to a webcam, but that’d be weird and intrusive).”

Himself an artist under the moniker of Moore Draw, Adam decided to help set up the event with Alzine’s Alice Owen after sharing a stall at a food bank fundraiser at the Cowley last year.

“What can zines do that blogs can’t?” asks Alice. “I guess even shit zines are kind of cool, whereas shit blogs are a total drag. Zines are much easier to take to the toilet than blogs. But both are really sweet in that they put a snapshot of the inside of someone’s mind into the public domain. It’s a subculture that grew up partly in response to comic book censorship and it’s somewhere for unregulated darkness and anger and humour and weird stuff to be.”

With various talks throughout the evening – including some mini comedy sets and an appearance from ‘Famous Poet’ Chris Parkinson – the event is also a fundraiser for local migrant charities such as Refugee Radio and Thousand 4 1000.

“I think zines are inherently subversive,” explains Alice. “Self-publishing has always been used to challenge power, without even having to be anti-establishment in theme or purpose. Charity is a bit like that too, it gets on with stuff. There are all these great people working to support other people, because they care about humans. I get worried about charity letting the state of the hook, but knowing about the work people are doing is essential because it makes charity more like an expose.”

“We love zines and want to draw attention to some shitty stuff that’s going on and some amazing stuff that’s being made.”

Ben Bailey is the editor of Brighton Source and a freelance writer. He also plays in a few bands and can sometimes be found giving talks on a variety of niche topics. He lives in Brighton and rather likes it.
← PREVIOUS POST
I Hate Christmas Pudding, 21st-26th Nov
NEXT POST →
Omar Photos
Mailing List
Recent Posts
Website developed in Brighton by Infobo
Copyright © Brighton Source 2009-2021
The Rose Tinted Spectacular - Brighton Source