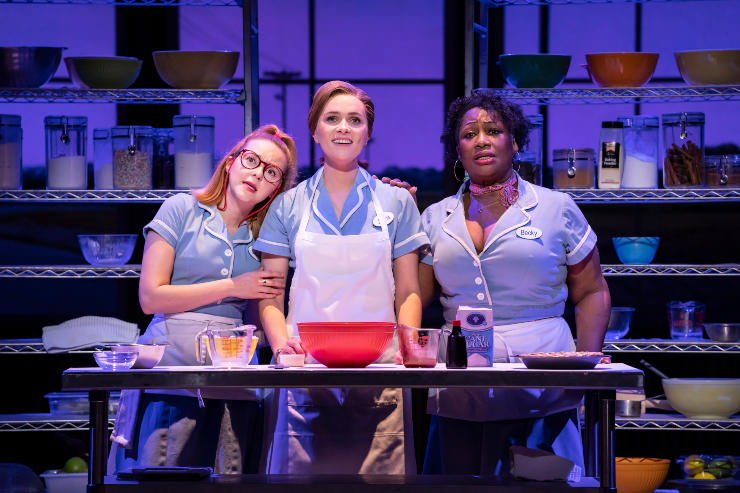 Following success on Broadway and in the West End, Waitress is soon due to visit Theatre Royal Brighton as part of a nationwide tour. We caught up with the show’s star Chelsea Halfpenny – well known for her time on both Emmerdale and Coronation Street as well as the West End – who joined the show earlier this year for its time on the road.

Set in an American diner, the musical follows expert pie baker Jenna, as she navigates an unhappy marriage and the consequences of a new arrival in the town. The show, “about finding love in the places that you might not expect to,” as Halfpenny describes it, has proved a monumental hit in its every guise so far, “warm, witty, wise and hilarious” according to the Express. Was Halfpenny herself a fan before becoming attached to the project? “A huge fan, a really geeky fan of the show and I am not ashamed to say that at all. I really loved it so now getting to be part of it is a total dream come true!”

And she is not alone, with the musical having attracted legions of devoted enthusiasts across the world and helping to catapult songwriter Sara Bareilles to stardom with hits from the show such as ‘She Used To Be Mine’ and ‘When He Sees Me’ making up a score hailed as “one of the best in years” (The Stage). “She writes things that are so specific, but at the same time you can take what you want from it as well,” Halfpenny says of the show’s composer and lyricist. “The songs tell the exact story of Waitress beautifully, but also you can relate everything that she has written to your own life for loads of different reasons. Even the funny songs have really heartfelt serious moments to them, and layers to them that you can discover each time you listen to the songs. They take on another life with each listen.”

And it is sure to attract more followers throughout its time on the road with a lengthy run this year including stops at Norwich, Nottingham, Canterbury and, of course, Brighton. Is Halfpenny finding the touring experience different to her time on the West End? “The logistics are, with packing up your bag and your dressing room every week and in a way it goes by so quickly as you’re so busy. It’s lovely to have a different audience each week in every town and city we visit as everywhere has its own vibe.”

Although reluctant to describe her arrival on the musical theatre scene as “a conscious move” Halfpenny certainly seems to have taken to her new surroundings. “The thrill of having a live audience and getting that instant feedback is amazing.” Having suffered her share of setbacks and audition woes before her initial success (landing a role in Dolly Parton musical 9 To 5 in 2019) she is quick to counsel those she shares the industry with. “Always believe in yourself and give yourself a goal. It’s really easy to take on any negative feedback and dwell on it but just remember that it’s someone else’s opinion and to keep working at your dreams!”

A catchy pop-infused score, an absorbing plot packed with loveable characters, all brought to life by an unfairly talented cast – with these ingredients you might’ve said the show’s long-life and success was always a given. Easy as pie!

A fantastic, pastry-fuelled dreamscape that teases the fun from the fears found throughout love and life. Excellent performances raise a beautifully woven musical to new heights and are met with a fully deserved standing ovation come the end of the show. A musical that fully deserves the hype it has garnered complete with a score that is equal parts poppy and catchy as well as heartfelt and compelling, underpinning a production packed with goodness and warmth and as sweet as award-winning pie – Waitress is not to be missed!