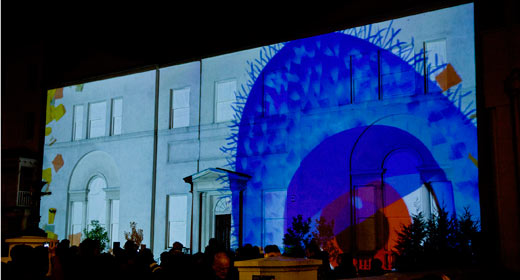 We can’t think of another city that would encourage artists, musicians and performers to run wild through the night. OK, maybe Amiens – the French town that came up with this whole Nuit Blanche idea and with whom Brighton has a great cross-cultural relationship now. But it’s a credit to Brighton council that the clocks going back is celebrated with over 70 events ranging from the straight-up fun to the chin-strokingly intellectual, many around this year’s theme of Utopias. Here’s a handful that we could make sense of, but go and explore and have adventures.

THE METAHUB Jubilee Square
The big commission of the night is by the AK/DK-related Beatabet and takes the form of a central hub for the streaming, mixing and collating of performances from across White Night. VJs will remix audio and visuals, included those brought in on smartphones from the public. Hit this first and see what you like from the information coming in. (JK)

ALTERNATIVE VILLAGE FETE
Old Steine Gardens
Contrasting the Metahub is another outdoor commission, an urban take on the ultimate country community event. Scheduling it at night ought to give it a very different feel, the organisers suggesting a “licence to delve into the darker side of folk”. Expect artistic twists on tea and cake, games and country dancing. (JK)

NUIT BLANCHE/ LA LUNE DES PIRATES
Prince Albert/Pavilion Theatre
It wouldn’t be a Brighton event without some bands playing and with these two events we get the best of Brighton and Amiens. The Albert hosts bands from France’s La Lunes Des Pirates venue and our own Bleeding Hearts and Numbskull. Meanwhile the former bring some of their fave local Amiens bands to the absinthe bar-themed Pavilion Theatre. (JK)

PIANO TRAIL City wide
A great success last year – the idea of placing upright pianos around the city is inspired. Kids can make a racket with their fists, cack-handed amateurs can pick out a tune and if you’re lucky you’ll get to hear some truly talented show-offs playing everything from boogie woogie to a Tchaikovsky concerto. (SC)

ONE-MINUTE MANIFESTOS Fabrica
You know what’s wrong with the world right now?! We’re sure you do, and if you can articulate it into a one-minute manifesto then you can have it megaphoned throughout the night outside Fabrica, rather than just rabbitting in the kebab house like you normally do. (JK)

MIDNIGHT HALF MARATHON
Details at bhf.org.uk/whitenight
Running is pretty boring in the daytime, but throw in the collapsed-drunk West Street steeplechase and the mugger-pacemaker sprint section and you’re onto a winner. In all seriousness it’s in aid of the British Heart Foundation and promises to be wonderfully otherworldly. (JK)

URBAN FUTURE GOLF
Brighthelm Centre Gardens
Now we’re not massive fans of golf but we’ve been right up for an urban version since seeing Spike Jonze’s Dinosaur Jr video. This will surely be even better because as well as teaching us how to play, the city-based course finishes on an artist-designed hole. (JK)

DAWN CHORUS Hove Bandstand
What better way to see the sunrise (at 5.30am) than at the ornate bandstand to the beautiful, delicate sounds of Nordic Giants. If you don’t have a ‘moment’ you’re made of stone. It’s organised by Playgroup so there might be some other surprises too with visuals as arresting as the music. (JK)

BREAKFAST IN PARADISE
Hove Centre
If you’ve made it through the whole night then you’re probably getting a bit hungry (or not hungry at all if you’ve been on the drugs), so how better to see in sunrise than a breakfast celebrating Black History Month. African treats will be washed down with music on the harp-like Kora. (JK)

FYI
WHEN: Sat 29th
WHERE: All across the city
WEB: whitenightnuitblanche.com

James Kendall was the co-owner and editor of SOURCE. He’s been a music journalist since 1992 and spent over a decade travelling the globe covering dance music for DJmag. He’s interviewed a range of subjects from Bat For Lashes, Foals and James ‘LCD Soundsystem’ Murphy to Katie Price and the Sugababes. He’s a keen photographer and has work featured in The Guardian.
← PREVIOUS POST
Oxjam
NEXT POST →
Comedy Festival
Mailing List
Recent Posts
Website developed in Brighton by Infobo
Copyright © Brighton Source 2009-2021
White Night - Brighton Source