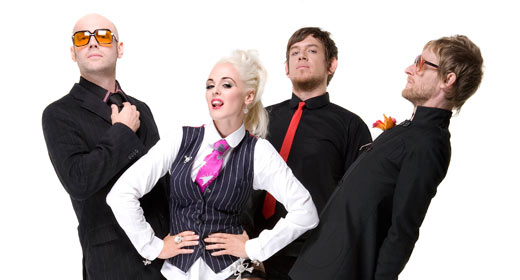 Everyone knows Oxfam – pretty much the biggest and widest-reaching hungry-helping organisation out there. But folk who go to gigs and clubs aren’t always awake when Oxfam shops are open, which used to mean a sizeable chunk of young society weren’t on the giving radar. Until, that is, Oxjam came along – plugging in and plugging the generational gap.

A month of fundraising gigs and clubs, Oxjam is now in its fifth year, having raised more than £1.5 million in total to date. There’s a nationwide programme of events listed over at Oxfam.org.uk/Oxjam – check here for dates and venues. Here’s a selection of Brighton highlights.

ANGELS AND SAILORS •
Named after a song by The Doors, Angels And Sailors play their own brand of blues-infused rock which is fun and very easy on the ear. Their live performance is propelled by an effortlessly cool yet energetic onstage presence, and the song ‘Love Cup’ is a winner with its big chorus and a hearty harmonica section. (HP)

GOLDEN STRANDs
The Golden Strands’ debut EP showed them toying and experimenting with all manner of samples and synths to find their sound. With it now found, they’re leaving their beloved Isle Of Wight behind to get the people of Brighton on the dancefloor with their electro infused alt-pop. Let’s not disappoint them. (TJ)

FRANCLASSIC
Two guitars and a drum-kit – a typical indie set-up. Two guitars and a beatboxer – not quite so typical. Much like their percussionist, FranClassic give a youthful take on a time-tested formula. Their relaxed attitudes and a penchant for cheeky cover versions will have you either singing or spitting along in no time at all. (TJ)

KOVAK •
One of the stars of the Playgroup Festival, Kovak’s mix of electro pop and classic indie has been picking up fans for them for years. Wonderfully energetic live, Annelies Van De Velde has a real stage presence and the boys in the band back her up with skills and personality too. Get ready to dance. (JK)

ROYAL BLOOD
One of the most powerful three-pieces we’ve heard in a while, we kind of came across these fellas by accident while checking out the Brighton bands we didn’t already know. ‘Leaving’, the only song so far on their Facebook page, is a massive riff-laden rock beast of a tune. Royal Blood: send us more please. Reader: go see Royal Blood. (NC)

FOXES! •
Having spent much of last year toiling on the road, Foxes! are back with an arsenal of new indie pop ammo. We’ve heard some of the evidence already in the form of an EP released a little while back, and this show is a timely reminder to acquaint yourself with the band’s high-energy performance. (NC)

EXQUISITE NOISE FESTIVAL
Another local mini-fest going on this month is Exquisite Noise, run by local label Numbskull HQ and featuring artists from their roster and beyond. It’s three days of cool gigs in the Albert, from Thursday 13th, starring Jennifer Left, Black Black Hills and the return of The Half Sisters, plus many others in a four bands a night bill. There’s also a 16-track sampler that will be given away to the first 50 people to buy tickets in Rounder. Check out tinyurl.com/ExNoise

Sometimes an article is a bit of a team effort, and those are tagged SOURCE Writers. If you’d like to be part of that team, hit the Contact link at the top and get your work on this website.
← PREVIOUS POST
Critic: October
NEXT POST →
White Night