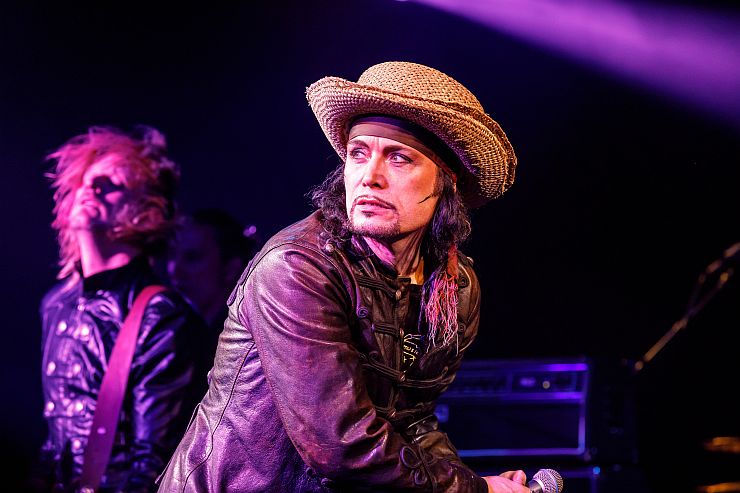 Living proof that you can’t keep a good man down, Adam Ant continued his ascendance to rock elder statesman with a show based around his first solo album ‘Friend Or Foe’, originally released after the Ants split in 1982.

The band took to the stage to the theme from The Saint and just as the last note of the intro music faded, launched into the opening title track from Friend or Foe. Adam looked in really great shape as he skipped and twisted around the stage dressed all in black and topped with a white cowboy hat.

The stage set up was simple with the ‘ant music for sex people’ logo as backdrop and two screens beaming out ADAM ANT (reversed D) below the double drummers. It was clear this shouldn’t have been a seated event as the crowd surged to the front to dance.

With a confident swagger and some cheeky whistling, Adam clearly enjoyed ‘Something Girls’ music hall melody while ‘Desperate, But Not Serious’ has aged surprisingly well. Adam’s voice remains strong and can still pull off a falsetto. The surprise false ending was pure showbiz.

The Doors’ cover ‘Hello, I Love You’ was suitably psychedelic and the energy levels ramped up during ‘Goody Two Shoes’. There were a couple of ant raps towards the end of the album and the penultimate ‘Try This for Sighs’ showed that this was a true professional, full-blown pop star backed by an excellent bunch of musicians.

It was now time for the hits, mostly culled from Adam And The Ants’ first two albums. On ‘Dog Eat Dog’, Adam thumped his chest while chanting “it makes me proud, so proud of you” and bounced off the monitors. Early B-side ‘Kick’ remains a great song with a fabulous drum intro but proved a little too obscure for the pop fans but this was soon resolved with ‘Vive Le Rock’, the song that introduced Live Aid to Tom of Finland, which featured Adam kicking and punching glitter ball beams into the crowd.

He donned a low-slung Gibson SG to complete a three guitar attack on ‘Zerox’, dedicated to audience-member and punk icon, Jordan and ‘Cartrouble’ still stands as a true classic. Dirk-era fans were spoiled with ‘Lady’, ‘Fall In’ and ‘Beat My Guest’ and those there for the hits were equally rewarded with ‘Prince Charming’, ‘Antmusic’ and a final ‘Stand And Deliver’.

Returning for the encore in a t shirt, it was old school all the way beginning with ‘Press Darlings’, played against a backdrop of sensationalist Adam Ant newspaper clippings; ‘Red Scab’, with Adam rolling up his sleeve to reveal his Pure Sex tattoo and a final ‘Physical (You’re So)’, a song so sensual you can almost smell and taste it, even in an arena of this size.

Tonight was an absolute triumph, especially given his well-documented mental health issues and, at the age of 65, proving that age is just a number.