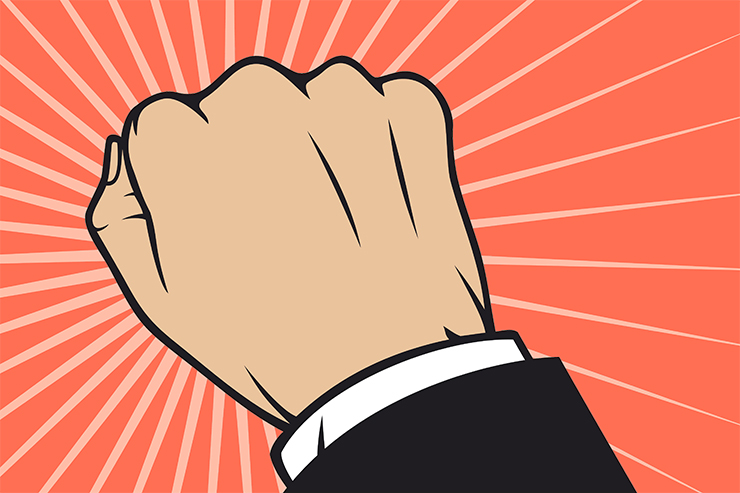 SOURCE Virgins is an irregular series in which people do things they’ve never done before and write about them. This time we went canvassing on the streets of Brighton ahead of the election.

THE REASONS
Following an election online is a frustrating and strangely passive experience. Sure, you can pump out posts and share memes on social media, but it increasingly feels like everyone I know is screaming at each other about things they already agree with. Maybe it’s not possible to truly burst the bubbles of confirmation bias that we all find ourselves in, but we can try. For me, going canvassing seemed like a good place to start.

When the Labour manifesto was released last month it felt like a breath of fresh air in a fug of very unpleasant smells. The Tories’ campaign has been defined by repeated lies, dirty tricks and a habitual refusal to show up for stuff. And it seems to me that they’ve been aided and abetted in this by most of the UK media. Without the backing of billionaires and media barons, Labour has to rely on ordinary people to get the word out. I realised that included me, so I decided to give it a go.

THE EXPERIENCE
I looked up the local Labour website, found a session that suited and turned up at the Kemptown office on Dorset Street. There were a dozen people outside, of various ages, all wrapped up warm against the drizzle. To get started we introduced ourselves and were asked to name our favourite pledge from the manifesto. Everyone gave different answers – ending the privatisation of the NHS, reinvesting in social care, renationalising the railways, starting the whole green industrial revolution thing. After that we divided into teams and made our way to Bevendean.

I had decided to canvass in the Brighton Kemptown constituency for Lloyd Russell-Moyle. As SOURCE recently pointed out in an article on tactical voting, this seat could very easily go back to being Tory. It’s not exactly a marginal, but I knew the area and liked the candidate. I was handed a bag of posters bearing his face, jumped in a car and quizzed the driver on the protocol of door-knocking. I was feeling quite nervous and probably asked the poor guy more questions than I needed to. He seemed like a bit of a veteran and what he said was helpful, but his attitude suggested there wasn’t really much to it.

For some reason I had imagined canvassing involved having polite conversations with strangers in their living rooms, possibly over a cup of tea, though I have no idea where I got this notion from. Of course, there were no cups of tea. In reality canvassing is more like data entry. We were there primarily to enquire about people’s voting intentions and to check names against the electoral register. Each of our teams was led by a ‘board-runner’, which to me sounded kind of cyberpunk, but it actually just means somebody with a clipboard. Given the persistent light rain, our clipboard guy had to protect the data as best he could with a plastic poncho.

The first thing I learned about knocking on doors is that they rarely open. Most people are out. Some people pretend to be out (with varying degrees of success) and others shut the door as soon as they realise what’s going on. At first I assumed these were Tories trying to avoid a confrontation, but I think a lot of people just don’t like being disturbed. We were advised not to bother trying to argue with Tory voters on their doorstep, which is fair enough, but I actually didn’t encounter anyone who admitted they were planning to vote Conservative. Then again, when there’s a guy with a bundle of Labour posters at their door, why would they? We did, however, encounter an angry Brexit Party supporter who crossed the street, pointed at his builder’s van and announced he wanted foreign workers out of the country. Nobody in our group really tried to tackle him on this, which surprised me, but I can see the sense in not weighing in against such views in the middle of the road at night. He didn’t even live at one of the houses we were planning to call on, so maybe he just wanted a chance to say his piece.

I spoke to another Brexit Party supporter who answered the door in his dressing gown, which didn’t bode well, but he was surprisingly open to having a chat. He showed me the Liverpool FC insignia on his collar and told me that as a scouser he would never vote Tory. I sensed an opportunity, but it turned out he also had a problem with Corbyn. When he claimed the Labour leader was a threat to national security, I joked that the biggest threat to our country was actually the Tories. We disagreed, but it was all very civil. Had this conversation been on Twitter it could well have taken a different turn.

Speaking to people you disagree with is one thing, but there’s nothing more depressing for a canvasser than someone who simply doesn’t care. A worrying number of those I spoke to said they weren’t interested, couldn’t be bothered, or thought all politicians were scum. These people were the quickest to shut off the conversation. Here we were: a team of volunteers giving up our time to tramp around in the rain, only to be met by blank indifference. How to make sense of this?

Anyone who goes canvassing is obviously pretty passionate about politics. They are likely to be immersed in ideas and events to the point where they can’t even conceive of not knowing this stuff. I’m often dumbfounded by those with zero interest in politics, but maybe there are parallels. For instance, I know practically nothing about sport. I’ve heard a few famous names here and there, and I might very occasionally watch a World Cup game, but the last time I knew about anything about footballers was in the early 90s. Perhaps some people dip into politics in the same disinterested way, sometimes with just enough interest to know which side they support. Sadly, the parallel ends with the fact that it ultimately doesn’t matter who wins at sport (though I’m not about to try saying that to the crowds of Albion fans at the station any time soon). Politics affects almost everything in your life, whether you care about it or not.

Of course, some people I spoke to were just put off or confused by all the clamour of the election, while others seemed to know very little about it. One guy didn’t even know which party Boris Johnson represented. Rather than despairing, I like to think there’s an opportunity in these conversations to win people around. I spoke to one woman who wasn’t sure who to vote for and seemed unclear about which party had promised what. While we were talking, her son came home with a huge angry dog and I was cautioned to go and hide in an alcove. At this point, as I backed off to a safe distance, I figured the conversation was probably doomed. Remarkably she wanted to continue. She told me that she suffered from diabetes and knew that the hospitals were collapsing. By the end of our short chat she said she would probably vote for Labour, to stop the sell-off of the NHS.

These moments are rare. The other people on my team said they’d had one or two interesting conversations which may have won a vote for Labour. However, they also had some disturbing stories such as the lady who said she didn’t know which party she supported because her husband always told her who to vote for. It’s a pretty shocking revelation in this day and age, but I guess it shows the limited view of the world we have from the right-on environs of social media.

Meeting committed Labour voters makes a nice change from all this. Often these people were keen to shake my hand and actually thanked me for doing the rounds. You could argue that knocking on a Labour door is merely interrupting the converted, but apparently it’s all useful data. Plus when you’re out for a couple of hours in the dark it’s encouraging to have a bit of rapport. One guy explained his conspiracy theory to me about Boris Johnson’s policy on climate change – it was based on the idea that by killing people through austerity he was actually aiming to lower the population and thereby reduce our nation’s carbon footprint. He was definitely joking, by the way. The same person recommended I watch the video above by Cassette Boy (which is pretty good, but the edits hurt my eyes).

Above all, canvassing has taught me that people are unpredictable and entirely idiosyncratic in their attitudes. One woman on our team found themselves in a weird role-reversal situation when a very smiley Jehovah’s Witness answered the door. “We like to help people,” they told her, “but we don’t do politics.” Another said they’d actually heard someone shouting at them to get off their property (funny how the attitudes of the landed gentry trickle down much more readily than the money). Some of the reactions I got were amusingly random: “I’m moving to Australia next week so it doesn’t matter to me, mate.” While some were straight to the point: “I’m not voting for that Etonian prick!”

WAS IT WORTH IT?
I’ll never know if my efforts have made any difference at all, but I’m glad I did it. I’ve been a couple of times now and I’ve realised that engaging people on the doorstep is a skill unto itself. Having a chatty personality certainly helps, as does a certain quick-wittedness (rappers and stands-up would smash it). I’ve also realised that I’m probably not the most effective canvasser, mainly for those reasons. However, I would encourage everyone to try it, especially if they find themselves suffering from the same kind of agitation with the online world.

On a personal level I found it fascinating. How often do you get to talk to people with opinions different to your own? Doing this has reminded me that you can’t make assumptions about people based on where they live, and that you should never take it for granted what they might think. It’s also made me aware of certain fuzzy holes in my thinking that I’m not often challenged on.

There are still a couple of days left to get out and do some canvassing. Getting voters out on election day is particularly important. All those people with posters in their windows count for nothing if they don’t actually show up to the polling booth. There is information here on how to help Labour in Kemptown, but you can get involved wherever you live. The guy in the car was right, when you’ve done it once there’s not much to it.

Ben Bailey is the editor of Brighton Source and a freelance writer. He also plays in a few bands and can sometimes be found giving talks on a variety of niche topics. He lives in Brighton and rather likes it.
← PREVIOUS POST
Harry Venning Interview
NEXT POST →
Adam Ant: Friend Or Foe Review
Mailing List
Recent Posts
Website developed in Brighton by Infobo
Copyright © Brighton Source 2009-2021
SOURCE Virgins: First Time Canvassing - Brighton Source