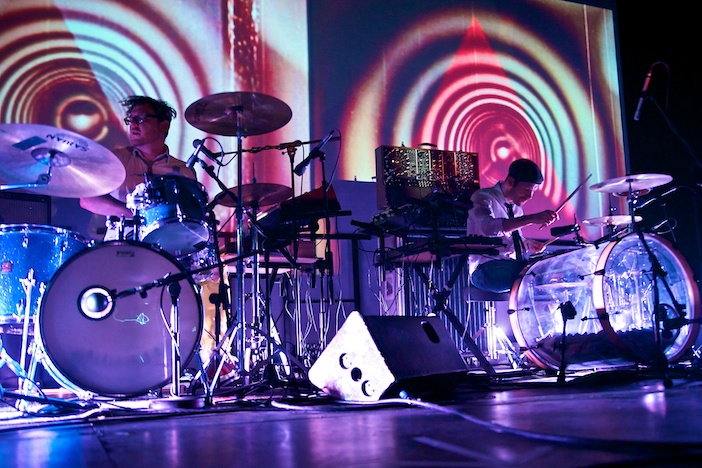 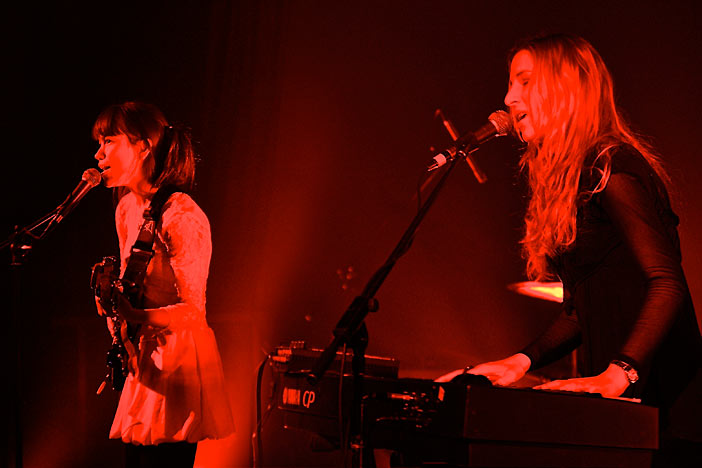 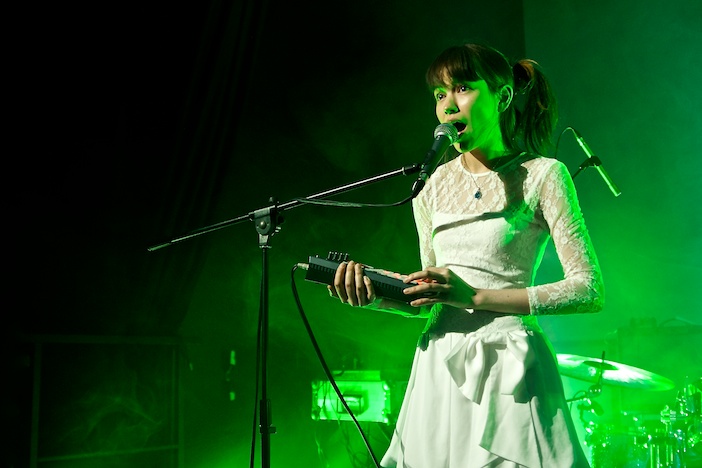 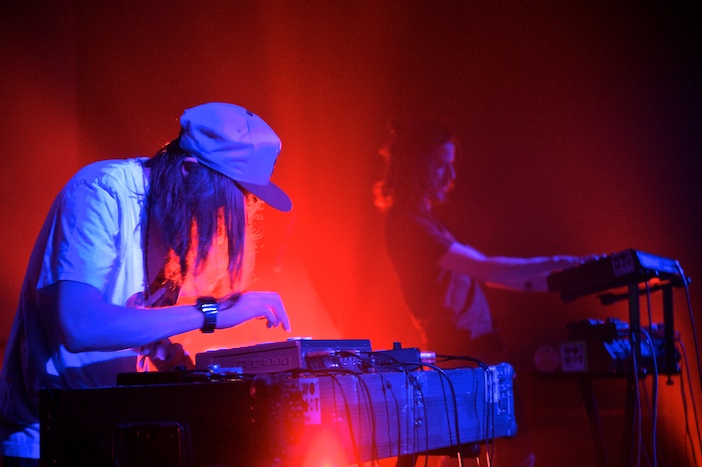 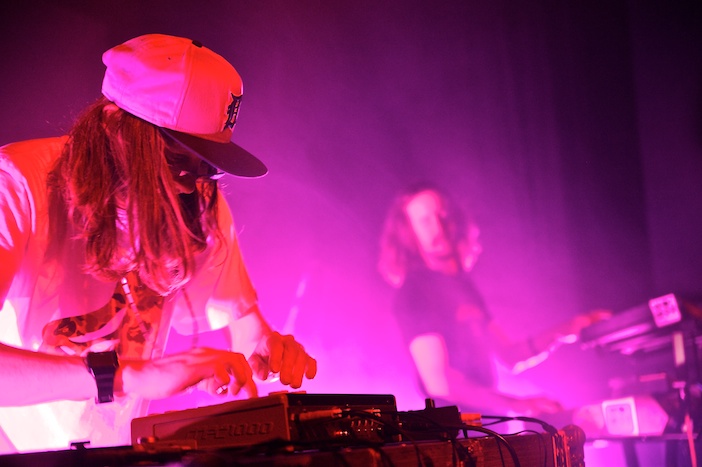 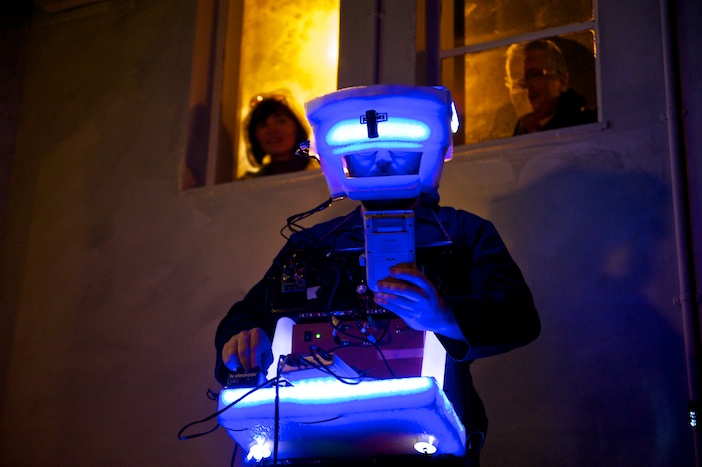 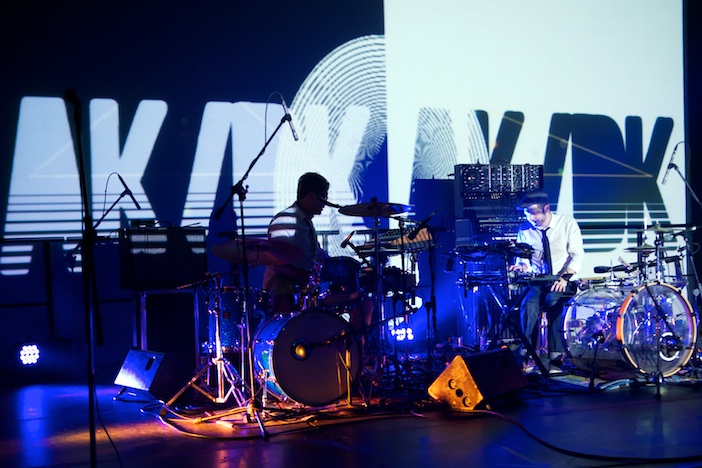 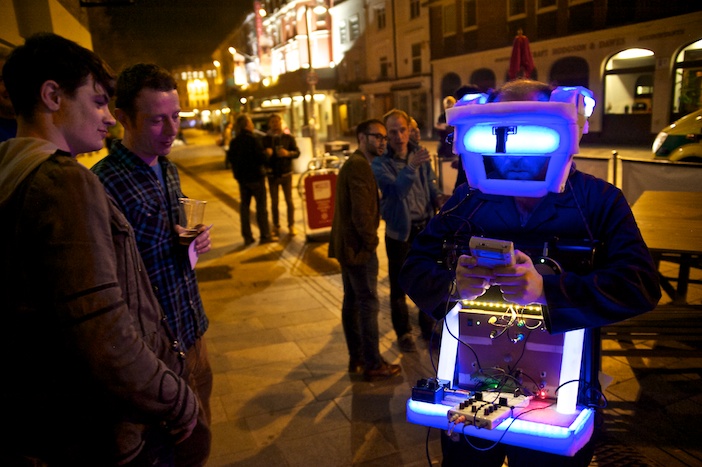 AK/DK are back, headlining April’s SOURCE New Music gig, a night for (mostly) digital duos. Night openers, Dog In The Snow are fragile and endearing. The lead singer has a tender presence, even when stamping effect pedals and striking her guitar. A wall of reverb swallows muffled distortion, ghostly melodies and guitar phrases.

Triggering each beat with their fingers, DA10 serve fast-paced electro as brash as MSTRKRFT and as funky as Chromeo. The synth player concocts bubbling arpeggios, angry bass lines and spacey pad tones whilst the ‘drummer’ throws out hard and fast jams, licks and fills. On the rare occasion he makes a mistake, he styles it out immaculately, keeping us in awe of his fast moving fingers.

Downstairs something bizarre is happening: a man in a flashing plastic foam helmet, a blue jumpsuit and a kitted-out shelf hanging from his neck is programming music on a Gameboy. This is George Lazenbleep, treating us to bitcrushed beats and tones with a certain fun makeshift charm.

The stage is set with two off-centre drum kits, a pair of keyboards and copious amounts of equipment, but AK/DK open by focusing our attention on a boombox-looking device. Ed runs around it – pulling wires and turning knobs – starting blips and blops that seem to loop as a clock-like light ticks round. This is AK/DK’s forte: the slow and masterful build, capturing audiences in anticipation.

An eruption of choppy drums, aggressive dance bass and bellowing corrupted vocals rewards our eagerness. G is a charismatic frontman even when he’s trapped behind various instruments. The force with which he plays drums (sometimes simultaneously playing keyboard and singing) is mesmerizing, but it’s when Ed joins in on his kit that it gets really intense.

Feeling less improvised than previous shows, the songs have been reined-in, becoming more aware and melodic. The new single ‘Battersea’ is twee, with a ferociously happy hook that’s drummed into your head by the multitude of ways they drop it in and out.

AK/DK are astoundingly talented multi-instrumentalists and have a stage presence akin to Soulwax. But where Soulwax are tight and seamless, AK/DK are loose, raw and aggressive. We left the gig wondering why all live electronic music isn’t more like this.

Sometimes an article is a bit of a team effort, and those are tagged SOURCE Writers. If you’d like to be part of that team, hit the Contact link at the top and get your work on this website.
← PREVIOUS POST
Festival Guide 2013
NEXT POST →
Anthony Prior, Unsung Hero No.39
Mailing List
Recent Posts
Website developed in Brighton by Infobo
Copyright © Brighton Source 2009-2021
AK/DK Review - Brighton Source