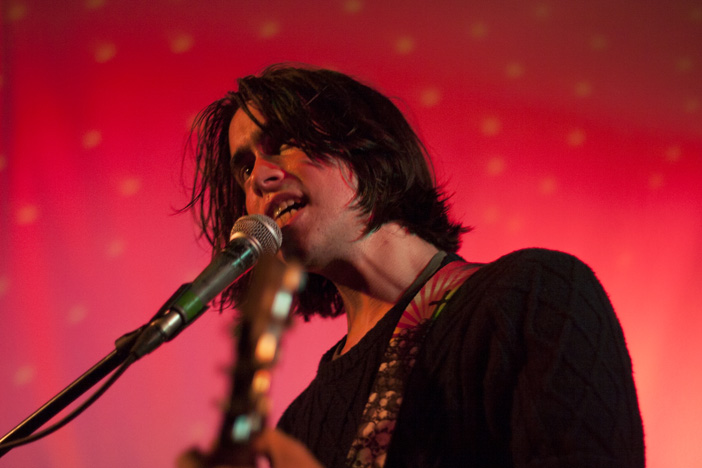 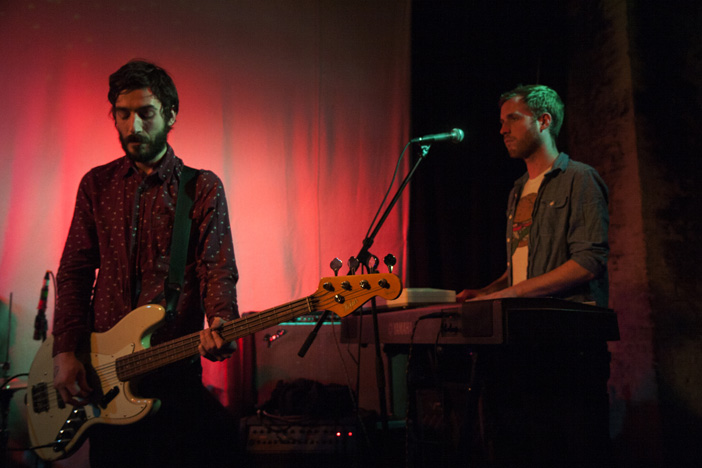 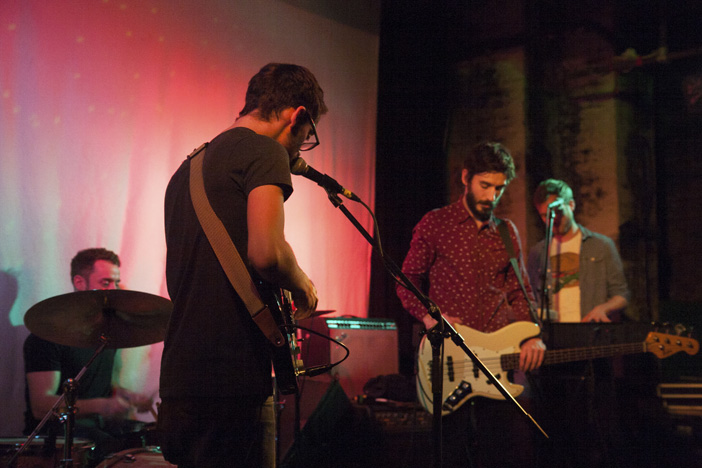 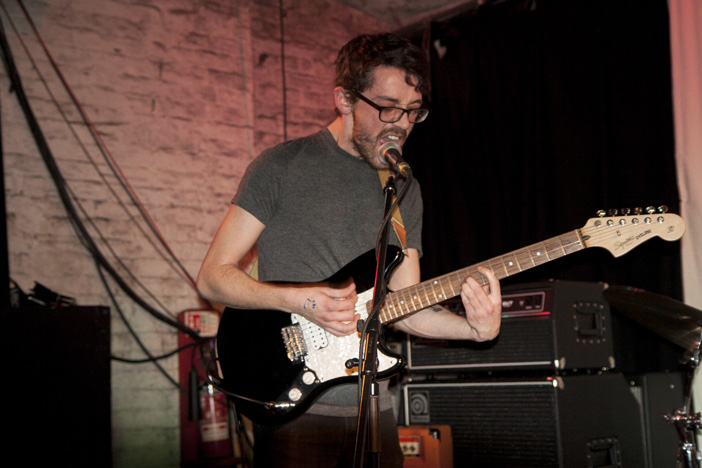 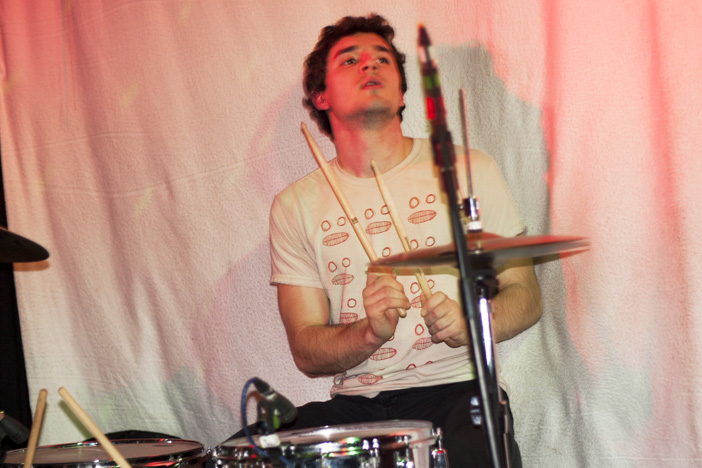 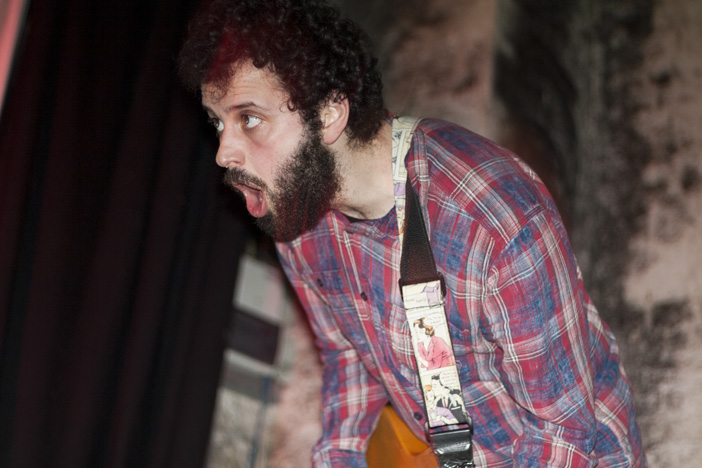 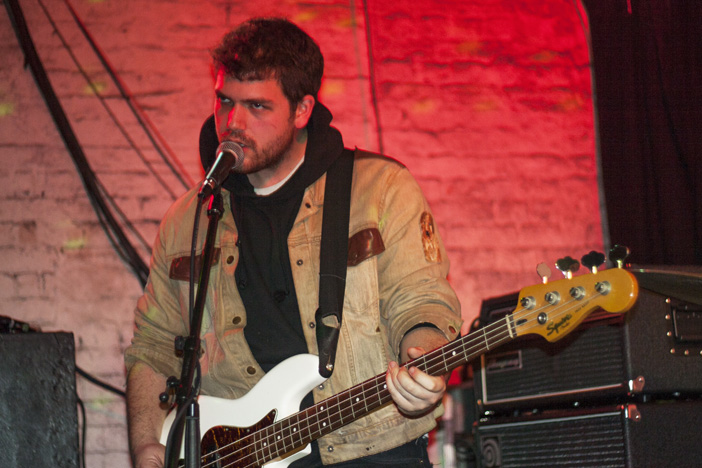 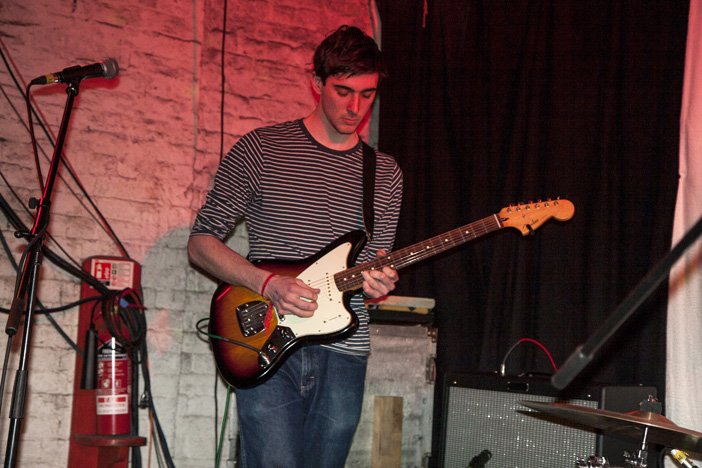 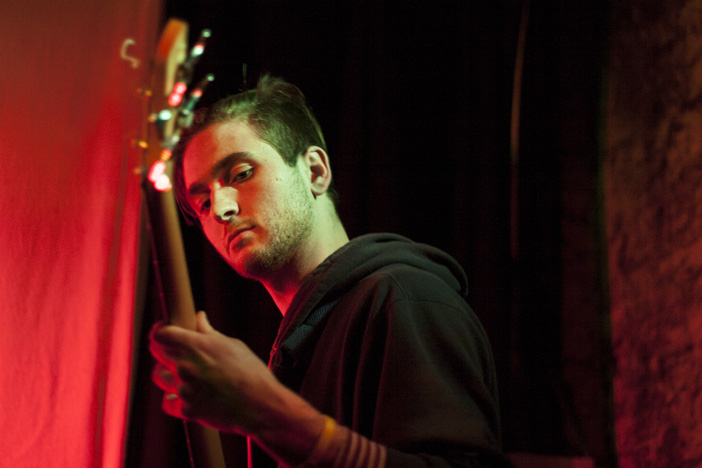 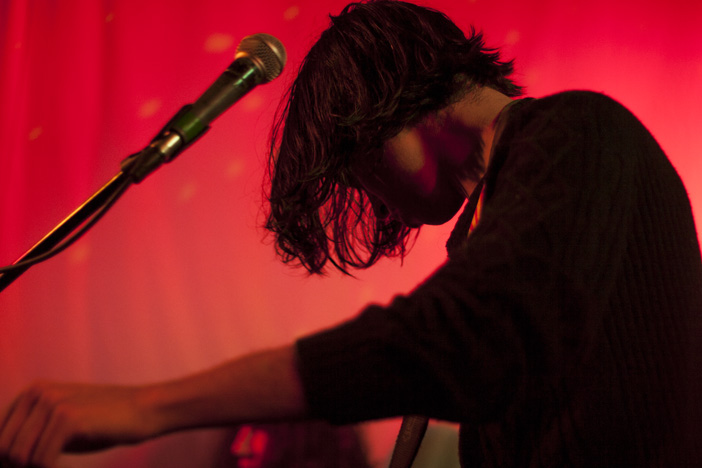 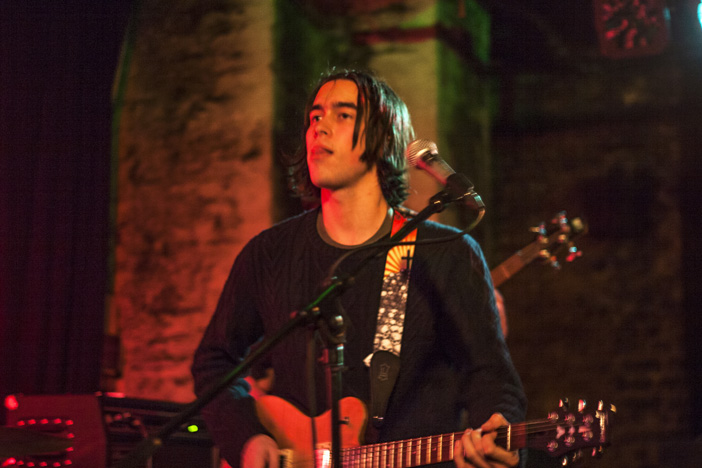 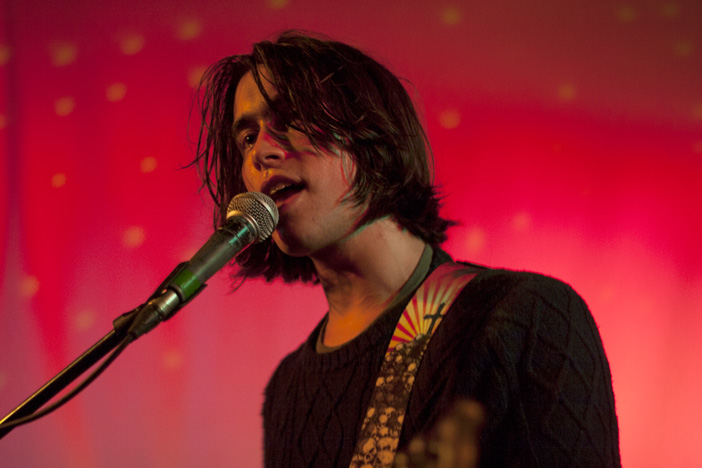 Be Nothing and the Green Door Store are serving up a musical feast tonight with Alex G and Krill set to play a sold out show. First up though is Brighton’s Chalk who are touring their latest release ‘How To Become A Recluse‘.

Vocalist/guitarist Stephen Stride’s tender and self-deprecating lyrics cast him somewhere between Orlando Weeks and Rivers Cuomo. Songs slowly build from delicate skeletal structures into gigantic riff heavy monoliths. “This guitar is new and sounds particularly shit on this song” admits Stride near the end of the set. You wouldn’t notice it by the crowd reaction – Chalk are on majestic form.

Soaked in red lights with the disco ball projecting tiny molecules across the stage – Krill arrive in oceanic style.

The Boston three-piece open with ‘Never A Joke’ from ‘Lucky Leaves’. Every note sounds crystalline with guitar licks and basslines jaggedly entwining amidst chaotic drum fills. Frontman Jonah Furman has a hint of his brother Ezra in his unhinged vocal delivery and the track sounds breathtakingly deranged. It’s the best song the Pixies never wrote and the crowd react ecstatically.

“We went to Stonehenge today, it was pretty nuts. We went for like four minutes and were like… OK,” says Furman with a grin.

Tonight is the last UK date on the tour for Krill before they embark across Europe and head to SXSW. They draw heavily from their new album ‘A Distant Fist Unclenching’ fusing garage, math and Krautrock into something ferociously unique. Songs like ‘Phantom’ take their time to unravel and reward with massive pay offs at the end. The crowd have been in awe including Alex G at the front who has been nodding along in a trance.

“The first show we played with Alex G was in a basement about a year ago. This is very different” says Jonah with a smile. Krill then close with a colossal rendition of ‘Tiger’. The three piece twist and tease in all directions before colliding in perfect unison for a frenetic ear splitting finale. Good luck Alex – that will take some following.

Alex G looks like a mix between Cullen Omori from the disbanded Smith Westerns and Bill and Ted era Keanu Reeves. However, the exhilarating opening chords of ‘Memory’ quickly dispel any thoughts of Dogstar shows. It’s clear we’re in for something special.

Twenty-three-year-old Alex Giannascoli had a massive 2014. He went from internet fanboy favourite to critical darling after releasing his debut ‘DSU’. The Pennsylvania native could be set for an even bigger 2015 with a wealth of hype behind him and his follow up ‘Trick’ arriving in April.

‘DSU highlight ‘Harvey’ sounds as bittersweet live as on record but with added muscularity via the weight of a full band. ‘Black Hair has a gorgeous melodic breakdown with lead guitar chimes that sound straight out of Johnny Marr’s playbook.

‘Icehead’ would fit perfectly at the end of a 90’s teen movie as the credits roll and he juxtaposes his angelic childlike singing on the verse with feral screams. As the last aquatic chords ring out he implores the crowd to “Have fun!” – they respond accordingly.

‘DSU’ opener ‘After Your Gone’ gets the biggest reaction of the night with the frontman’s voice hovering spectrally over blankets of fuzzy guitar. He blends the bedroom introspection of Elliott Smith and Youth Lagoon with the snarling bite of early Smashing Pumpkins. Alex lets loose on his guitar for the finale leaving the Green Door Store in raptures.

A few members of the crowd are shouting for Alex to play Cranberries hit ‘Linger’ to which he screams wild eyed: “We quit! Shut up!” before a giving knowing smile.

The opening notes of ‘Hollow’ silence the hecklers and the girls standing next to us are arm in arm screaming. The chorus drops and Alex sings ‘Swallow this…’ over a reverberating riff. A wild mosh pit erupts in the centre and we’re caked in beer.

“Success is the only thing I understand” sings Alex on ‘Harvey’, he can rest assured there’s plenty more to come.