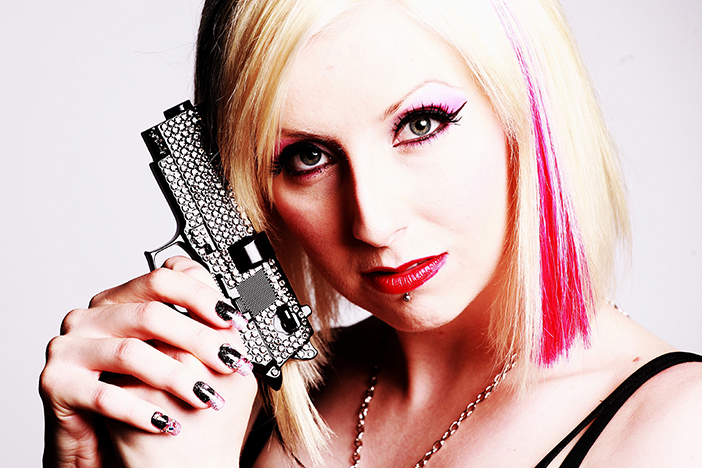 Goth is an ageing scene, as the number of crow’s feet kicking away at the eyeliner at most events will tell you. Then there is the marginally younger cybergoth scene, which since the sad demise of Below Belushi’s Synergy night is served in Brighton only (and expensively) by Cyberdog on Sydney Street. Therefore it is warming to see a wide range of ages come out to see Canadian futurepop artist Ayria touring in support of latest full-length release, ‘Paper Dolls’. Even if it looked at times like there were more people present from either Ayria or the supporting acts than audience members themselves.

Chelmsford’s KLOQ are the first up, with a delightfully punchy yet squeaky clean electronic rock sound. Frontman Dean Goodwin has the appearance of an 80s Brat Pack star, utilises a vocal technique not dissimilar to Filter’s, and it’s not long before standout tracks ‘This Beat’ and ‘Behind The Screams’ have onlookers morphing from head-nodding to knee-jerking.

Inertia are the next to take the stage, with their lead singer (Killing Joke keyboardist) Reza Udhin complementing the band’s Depeche Mode-esque dark electronica with haunting vocals and wild eyes. The band’s name is diametrically opposed to their affect upon viewers, when the first of a smattering of glowsticks appeared. A pleasing combination of synths and the occasional soaring guitar sound (such as appears on ‘Distant Mind’) are the shadowy backdrop to what is to be Ayria’s decidedly anime-tronic set.

It is impossible to avoid comparisons with Lady Gaga when Ayria arrives, with her platinum blonde hair and aquiline features. Voice-wise, the woman bouncing around the Prince Albert’s stage has a softer approach, akin to a toned-down I:Scintilla or Angelspit. There is an interruption to proceedings early on as the male keyboardist attempts to resolve a frequency problem in an entertaining aside.

Then the sugar-coated electroclash continues, with the dedicated glowstickers dancing non-stop both to favourites from the previous four albums, and stomping monsters from the current, such as ‘Crash And Burn’. “You guys are here to party!” Ayria (real name Jennifer Parkin) notes in her Canadian accent, and tells us she wants to meet us all. She stays true to her word, and mingles with the crowd afterwards, before her final date at London’s sprawling Electrowerkz the next day.

Karen has been living in Brighton since 2010, where she rediscovered a love of music. And bars. And clubbing. She currently works three jobs to pay for these pastimes. When not writing or working or falling over, she can usually be found stuck in a book.
← PREVIOUS POST
Brighton Food Tour Review
NEXT POST →
Wild Life Festival 2016 Review
Mailing List
Recent Posts
Instagram has returned invalid data.
Website developed in Brighton by Infobo
Copyright © Brighton Source 2009-2019
Ayria Review - Brighton Source