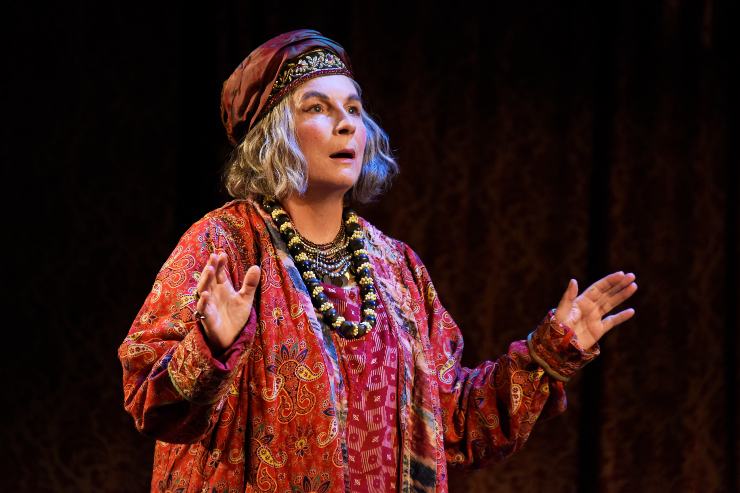 Blithe Spirit, Noel Coward’s classic comedy about love and scandal between this world and the next, lands with a bang at Theatre Royal Brighton. The production, originally produced at Theatre Royal Bath, arrives as part of a UK tour to shortly be followed by a transfer to the West End.

Novelist Charles Condomine (Geoffrey Streatfield) is planning on writing a novel concerning the occult. For research, as well as some shallow entertainment for himself and some friends, he invites renowned medium Madame Arcati (Jennifer Saunders) to the house to conduct a séance. However, the ritual proves to be a success and results in the conjuring of Charles’ late first wife, Elvira (Emma Naomi). Unfortunately this was far from intended, is not appreciated by Charles nor his current wife, Ruth (Lisa Dillon), and leads to the examining and fracturing of relationships past and present…

Richard Eyre helms a spirited production, confident with its charm. Noel Coward’s signature style and flair is allowed room to play and the show rattles along at pace with every beat loaded with witticisms and asides. The uncharted depths of the paranormal are thrown like a hand grenade into the midst of characters coddled with social pretence and formality and this production competently plucks the laughs like low-hanging fruit. As with most of Noel Coward’s work there are sombre undertones beneath the frivolity and here they ring out in the rare occasions when the pace is allowed to drop and where characters and audience can unpick what it is to suffer loss, to move on, to dwell too deep in nostalgia.

Jennifer Saunders enters to applause and spends the rest of the show proving it well-earned. She imbues Madame Arcati with an effusive madness, constantly out of breath and exhausted by her own state of urgency. She perfectly treads that fine line between crazy and genius and looks to be having fun doing it. The rest of the cast superbly match this energy and pace with Lisa Dillon, in particular, shining as current-wife Ruth, ratcheting up the tension and exasperation until it surely can go no further.

Blithe Spirit is a lot of fun. Tongue-in-cheek silliness keeps the show light and at times farcical as it skirts across some potentially sobering questions concerning the other side (or lack of). Strong performances bring to life one of Noel Coward’s greatest works and this production deserves acclaim in both this life and the next.