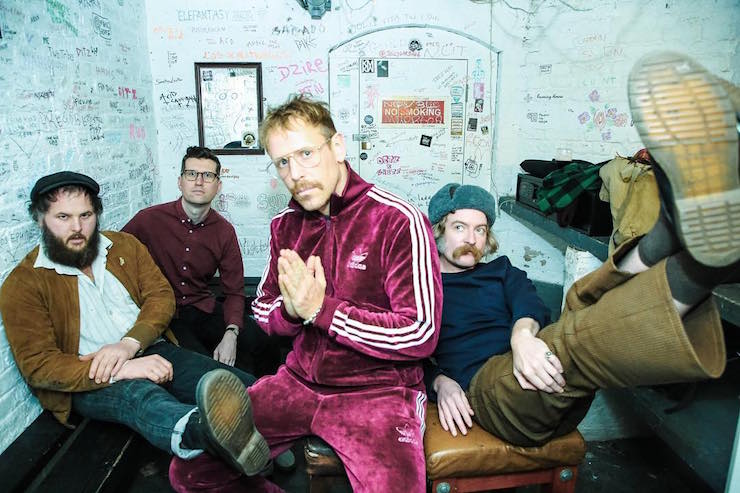 Instrumental cosmic surf rock. It’s a niche scene. In the US, it’s represented by Alabama’s Man or Astro-Man? In the UK, we have Japanese Television, or JTV if you’re feeling over-familiar.

These dudes have been winning fans across the nation after a series of scorching singles, a Marc Riley session on BBC 6 Music and a nationwide tour. Recently, they played the sold-out Lewes Psych Fest, but if you missed out on that (and many people did), Acid Box Promotions are putting them on at The Hope And Ruin on Saturday 15th Feb.

But that’s not all. There’ll be a light show from Innerstrings (the shadowy figure behind the bubble projections at Lewes Psych Fest), plus support slots from new Brighton bands Melt Plastic Group (psychedelic krautrock weirdness) and The Psycho Relics (garage rock). It’ll be like a mini Psych Fest all of its own. Tickets are apparently flying out, so get in there while you can.

Listen to Melt Plastic Group’s debut EP on Bandcamp. And check out JTV’s ace video for ‘Uncle Doovy’ below, the riff for which was inspired by an ice-cream van jingle. See if you can spot the dancing hot dogs and cascading sushi.

The Hope And Ruin, Saturday 15th Feb 2020
Tickets available at Resident Records, as well as the usual sources

A magazine journalist and former BBC minion, Gaz's words can be found in publications ranging from The Radio Times Guide To Films to 1001 Songs You Must Hear Before You Die, as well as on his blog The Wine Ninjas . He plays drums in a psych band, and once fell into a frozen lake in Transylvania.
← PREVIOUS POST
Gregory Porter, Sat 14th May 2022
NEXT POST →
Chop Chop, Thursday 13th Feb
Mailing List
Recent Posts
Website developed in Brighton by Infobo
Copyright © Brighton Source 2009-2020
Japanese Television, Saturday 15th February - Brighton Source