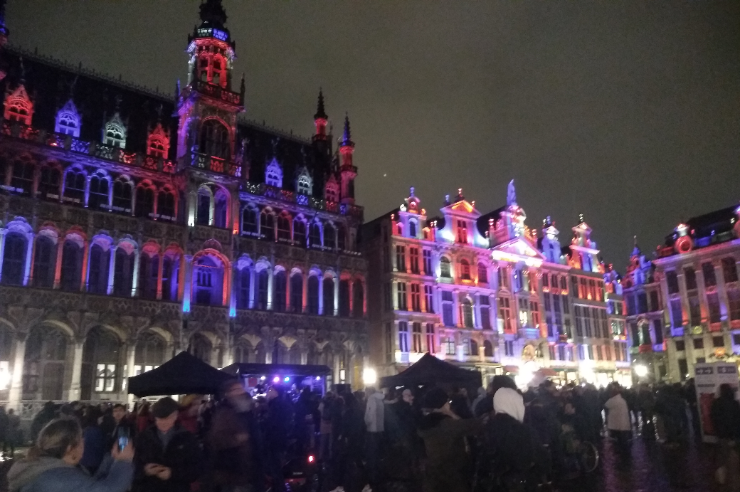 When the United Kingdom voted in the EU Referendum back in 2016, we citizens of Brighton and Hove came out heavily in favour of staying in the European Union (68.6% Remain versus 31.4% Leave). Nationally, of course, Leave won the argument but by a far tighter margin (51.89% Leave versus 48.11% Remain) and the country eventually left the union last night (Friday 31st January).

Well, here at the SOURCE we didn’t want to leave and odds on nor did two-thirds of you, so we made some late-bookings and got ourselves over to Brussels, effective headquarters of the EU, to make the most of our last few days as full European citizens. What we found in the galleries, bars and squares of the city was a restless, international outlook and a reassuring sense that, within or without the EU, we British remain welcome there.

We arrive in Brussels on Wednesday 29th January, having already accustomed ourselves to the famed local cuisine of strong Belgian beer, waffles, chocolates, fries and mussels after two days in a very much out-of-season Bruges. There are still over 48 hours to go until the bell tolls on our EU membership, and the subject doesn’t seem to be exercising the minds of our Belgian friends as we explore the old city centre. The bigger international story, as evinced by the numerous pollution-dampening face masks on many Chinese tourists, is the rapidly spreading coronavirus epidemic (yet to reach Belgium, at the time of writing, but enough of a worry to make us nervous about heading home). 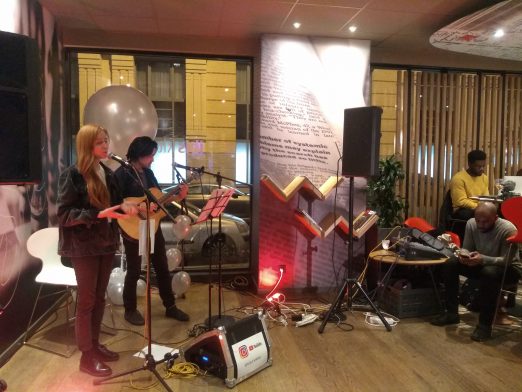 We do manage to chance upon a bit of cultural exchange on returning to our Ibis hotel, however, where some kind of Great Escape style, inter-Ibis music festival appears to be launching. We catch Brussels-based singer-songwriter Nola Mann rounding the evening off with some predominantly English language cover versions in front of a younger crowd than the Ibis bar seems to be used to. Mann’s song choices range from Europop (Alphaville’s ‘Big In Japan’) to r’n’b (Rihanna’s ‘S&M’) and acoustic guitar led-hip hop, scoring bonus cultural-confusion points for a Sugarhill Gang / Eminem medley based around Cypress Hill and Sonic Youth’s Judgment Night soundtrack contribution ‘I Love You Mary Jane’. Our inability to speak much more than cursory French means we can tell you little other than that she’s got her debut EP coming out soon and you can find her on Instagram, if not anywhere else. (That Judgement Night soundtrack though, time for a revival of interest for sure).

Thursday finds us heading north to Brussels’ landmark tourist attraction the Atomium. Students of troubled international relations might like to head to Wikipedia for a brief run-down of the Atomium’s raison d’être, the city’s 1958 World’s Fair (colonial controversy, Cold War paranoia, cultural vandalism, it had the lot) but the structure has survived long past its intended use-by date to survive as a self-styled symbol of – and we’re quoting its website here – “the democratic will to maintain peace among all nations and faith in progress”. Both futuristic and retro-kitsch, it’s still definitely worth a visit. Unexpectedly, our Atomium ticket also gives us entry into ADAM: Brussels Design Museum a couple of hundred yards away, which fortunately happens to be hosting Too Young To Live, Too Fast To Die, an extensive exhibition of punk and post-punk design. Amongst the hundreds of posters, flyers and record sleeves on display are numerous classic, bold and bright pieces from British designers such as Jamie Reid (Sex Pistols) and Barney Bubbles (Stiff Records), lots of promotional posters for UK bands at continental venues like Brussels’ Plan K and Berlin’s SO36, and curios like a beautifully printed poster for Johnny Moped’s 1978 debut single ‘No One’ / ’Incendiary Device’ that sees the Croydon punks leaping about merrily beside the Palace Pier. Such things are cultural exchanges made of.

Later that evening, we’re dining out on Belgian meatballs when we get the Twitter alert that there’s some kind of big civic send-off to the UK happening in the city’s 15th century Grand Place. Heading over in the drizzle, it turns out that Brussels has taken upon itself to pre-empt any official EU or UK Brexit commemorations by holding its own Brussels Calling farewell celebrations, photos of which (probably better-taken than the mobile phone ones which accompany this SOURCE feature) soon appear on news media around the world.

As the venerable buildings surrounding the Grand Place are lit up in red, white and blue, tourists and locals are greeted by a wonderfully muddled celebration of Britishness. A cosplaying Sherlock Holmes and Dr. Watson happily pose for photos alongside more static British clichés such as a black London Cab, red telephone boxes and a pair of dummy, busby-wearing Queen’s Guard mannequins, complete with sentry box. 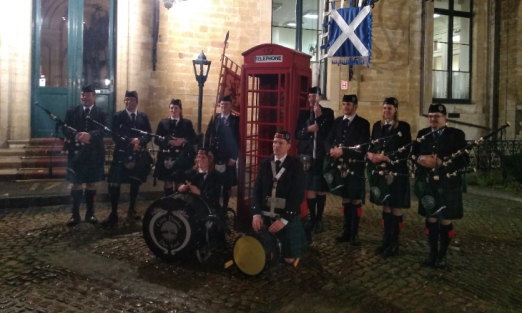 ‘Keep Calm & Stay Welcome’ the event proclaims, as Scottish pipe band Celtic Passion patrol the square and a handful of local, Celtic folk bands (High Trees, The Celtic Seven, The Hitchhikers) provide live music to the crowds on a small stage. Admittedly, this music includes a fair amount of traditional Irish tunes — ‘Molly Malone’, ‘The Irish Rover’ (or “rovver” as the band understand it) — which our EU-remaining Irish siblings might not expect to hear at a Brexit-themed party, but the sentiment is well-intended.

The over-riding feeling of the whole Brussels Calling event is that while the city is sad but resigned to see the UK leave the EU, they are very happy to welcome us back to their city, whether as fellow union members or simply as tourists. There is next to no triumphalism from either side: we see one young Belgian man holding a can of beer over his head, shouting “Bollocks to Brexit! Europe is the future!” but that’s as explicitly political as it gets. 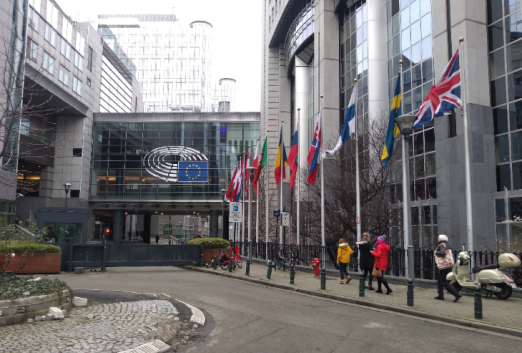 Friday 31st January is our last day, both as tourists and as EU members. We take a lunchtime wander up to the terribly grey European Parliament building at lunchtime just to see the Union Jack still flying outside for a few more hours, before scarfing down a final plate of meatballs and getting on board the 5pm Eurostar back home. As we speed westwards across the flatlands of northern Belgium and France, the sun sets ahead us, disappearing behind England as we descend into the darkness of the Channel Tunnel. It feels like we’re heading straight into some massive Brexit metaphor. 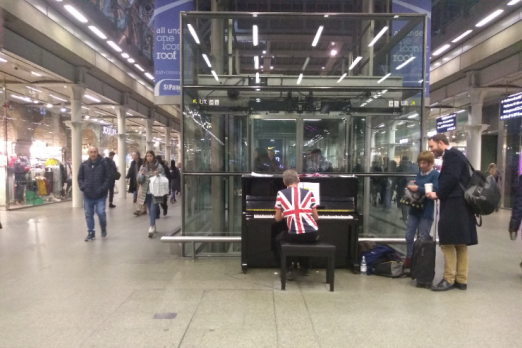 When we arrive at St Pancras Station a couple of hours later, one man has positioned himself on the stairs to the concourse, waving a pair of huge Union Jacks, stomping his feet and shouting random patriotic phrases. Another man in a Union Jacket waistcoat is banging out the Dambusters theme at one of the station’s upright pianos. He’s got some home-printed lyrics on the piano stand in front of him, entitled ‘Remainers’ Song’. We don’t dare look.

Despite plentiful reassurances and dire warnings, none of us really know what’s in store in this Brexit Britain to come. It’s not unreasonable, as a Remain-voting Brighton & Hove resident, to fear the worst. But, if we’re looking for any signs of reassurance, our brief sojourn in Brussels has been enough to give us some signs of hope, welcome and forgiveness from our Belgian friends, at least. Brave heart, everyone.

Words and Photos by Stuart Huggett

Stuart Huggett grew up in Hastings, writing fanzines and blogs about the town’s underground music scene. He has been a regular contributor to SOURCE, NME, The Quietus and Bowlegs. His huge archive of magazines, flyers and vinyl is either an invaluable research tool or a bloody pain. He occasionally runs tinpot record label Dizzy Tiger, DJs sporadically and plays live even less.
← PREVIOUS POST
Tindersticks Review
NEXT POST →
Blithe Spirit Review
Mailing List
Recent Posts
Website developed in Brighton by Infobo
Copyright © Brighton Source 2009-2020
Postcard From Brussels - Brighton Source