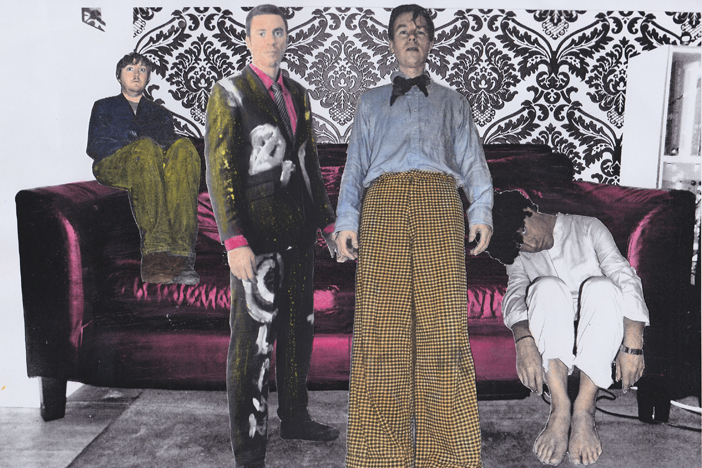 For anyone who’s witnessed the Clowwns’ live show there will inevitably be a tinge of disappointment in holding a copy of their debut album. Where’s the tall ominous but ever-visible presence of bassist Étienne Rodes? Where’s quiet man, Andrew Claridge, launching those spine-tingling guitar riffs. Or the dynamic drumming presence of Damo Waters, probably the best beats maker in town. Where’s vocalist Miles Heathfield’s besuited, pained expression as he launches himself into the faces of a terrified yet joyful audience?

However, a few plays of ‘The Artful Execution of Macho Bimbo’ and any disappointment soon dissipates. The Clowwns album lives up to expectations. This is a monster of an album.

The Clowwns sound is a combination of post-punk and glam rock, like the New York Dolls with better tunes or the Stooges if they’d grown up in a rainy town somewhere in Middle England and been dosed with night nurse rather than heroin. There’s the passion and bite of American garage punk, infused with an intelligent and English lyrical sensibility.

Of course there’s humour too. The Press Release says live favourite and opening track ‘She says I’m a Clown’ is all about sex war and gender power. But this is a man being a clown (the band occasionally dress as raggedy clowns to play live) being called out by a woman and it doesn’t need intellectualising. Other songs, like the monstrous ‘Bow-Legged Man’ or title track ‘Macho Bimbo’, seem to deal with modern gender relationships and the album title plays with the idea of killing off machismo. (There’s even a cock on the cover! Get it?)

Yet this is also a sexy swaggering album of four boys playing some very fine ballsy rock ‘n’ roll.

There’s the immensely danceable ‘Trousers’ which has already captured BBC Radio play: “It’s all sticky and sweet, a lick-your-lips treat, Get you off your feet…”. Or the pondering, mysterious ‘Love Vigilante’ with his cryptic declaration that there will be “no criminality, only humanity, and revenge in the city”. And there’s the single ‘Idiot Bouncing’, a punk rock scream of a song, potent, urgent and desperate, every bit as powerful on record as it is in their frantic live shows. This is an outstanding collection and an essential release.

Brighton Source readers can listen to the album in a special pre-release spot here, thanks to Bleeding Heart Recordings.

The Clowwns’ ‘The Artful Execution of Macho Bimbo’ is released on Monday 29th June and available on-line or in all good record shops.

The album launch show is at the Brighton Latest Music Bar on 10th July.