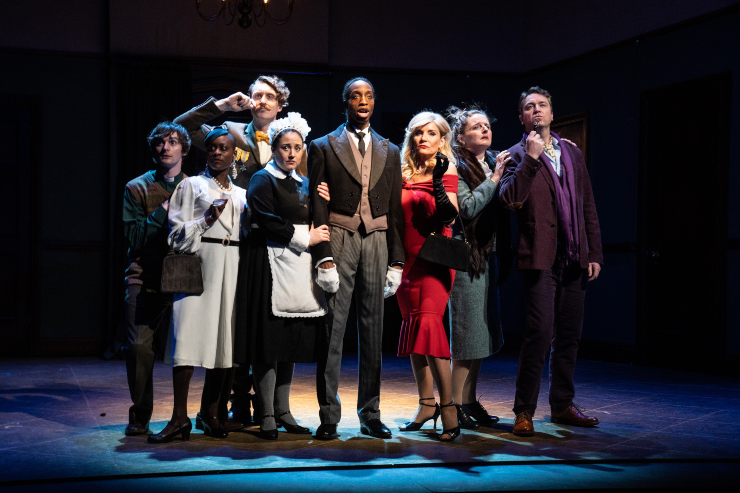 General Punter… In the auditorium… With the lead pipe?

This can only mean one thing…

Cluedo – the board game turned film turned stage show – lands on Theatre Royal Brighton for its next turn. The comedy whodunnit – helmed by director Mark Bell (The Play That Goes Wrong, A Comedy About a Bank Robbery) and starring Michelle Collins (EastEnders, Coronation Street) – packs murder with its mystery but promises to keep the tone as light and fun as an evening spent playing board games with family (or so we hope). We were fortunate enough to hear from Collins, who plays Miss Scarlett in the production, ahead of the show’s opening night.

“I think it’s the perfect climate for something feelgood like this. People are desperate to get back to the theatre. They miss that creativity in their lives. And it’s great that the play is something for all the family, something everyone can enjoy after the couple of years we’ve had.”

And it certainly makes for a timely outing for the show with board games having regained their popularity over lockdown. “It’s funny that board games have brought us back together when you find out that Cluedo was actually invented during the Second World War, when people were stuck at home during air raids, almost out of boredom!”

What makes this particular run of the production all the more special is that only a few miles further up the coast sits a certain ‘Tudorbethan’ style housing complex. Once a hotel for Hollywood stars – frequented by Cary Grant, Errol Flynn and Julie Andrews among others – the Tudor Close Hotel in Rottingdean is said to have inspired the show’s eponymous board game, with early editions originally titled Murder at Tudor Close. A turn in Brighton could almost be said to be site-specific with the former hotel’s illustrious clientele also having inspired the game’s (and now the show’s) characters (amongst them Miss Scarlett, Colonel Mustard and PC Plum).

“We all need a bit of glamour in our lives, don’t we darling?” says Collins, who, in some ways, is no stranger to the role of Miss Scarlett. “Me and my sister would go and stay with my five cousins and we would all fight for that part but because I’m the bossy one, I would always get it.”

And from spreading the board to treading the boards, what can we expect from this iteration of Miss Scarlett now brought to life for the stage? “I’ll have to have my own take on her but it’s really exciting to play someone who, like most women, has more going on than you see on the surface. She has a history. She’s very smart, looks glam and dressed up but she’s the smart cookie.”

From library to study, to kitchen to conservatory, dapper and illustrious guests will once more wander a local Sussex haunt. Unbeknownst to most, there is one amongst them that plots against the rest as if they were nothing more than pieces on a gameboard. As a grisly fate unfolds, a team of onlookers will examine the evidence and rack their brains over one question. Who could it be?

“You’ll just have to come along and find out,” laughs Collins, “won’t you?”

Well, we did go along. And our verdict?

Although it stuttered through a slightly muddled opening few minutes, what followed was nothing short of a masterclass in physical comedy. A fantastically capable cast deliver joke after joke at a dizzying pace (even the scene changes were something to look forward to) across a superb set that deftly recreated the many-roomed manor of the board game without cluttering the space with corridors and passages. A plot full of intrigue, scandal and suspicion was woven around the mechanics of the game with the infamous triumvirate of location, character and murder weapon united upon the stage to deadly and hilarious effect.

A witty and irreverent farce pulled from an unlikely source nevertheless proves a fantastic evening for all, whether you are familiar with the game or not. Book your visit to Boddy Manor quick as tickets… Are to die for.