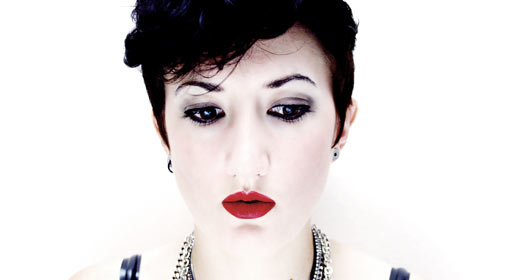 SINGLE: DAUWD •
What’s There (Pictures Music)
In a world where everyone’s a bedroom producer it takes something special to stand out, and this relative newcomer to the electronic music scene does that with aplomb. Breathtakingly warm and organic, this track samples finger-clicks and breathy sighs, which layer into a rich and enveloping soundscape. The notable complexity and depth of Dauwd’s tunes place him far from his contemporaries, and if ‘What’s There’ and the two other tracks on this vinyl release are anything to judge by, we’ve hit gold. (JMM)

ALBUM: MARY HAMPTON • Folly (Teaspoon)
The follow-up to her first album proper in 2008, the powerful ‘My Mother’s Children’, ‘Folly’ sees Mary Hampton once again retreat to almost medieval songcrafting traditions. The sophistication of the soft acoustic folk arrangements aside, the songs across this bewitching collection sound like they’re steeped in history and tradition. But that’s not to suggest it’s without vitality or isn’t contemporary – this is the most interesting folk new release we’ve heard in a long while. (NC)

EP: I AM AMITY • I Spy (Bleep Music)
Opening this six-track EP/album is ‘I Spy’, which builds from a tribal art rock intro to a fixed-stare mantra that’s as much Polly Harvey as Pope Joan. As an opening track to any CD it’s a bold statement of intent, but as a suggestion of what’s to follow it’s surprisingly off-piste. For the remainder the band revert to jaunty, almost cabaret folk and masterful pop balladry, styles that suit the soft melancholy of the vocal to a tee and bring out the best in the band. A promising introduction. (NC)

ALBUM: KIDDA • Hotel Radio (Skint)
If you’re looking for a more holistic remedy for those nights-drawing-in blues than a Prozac prescription, this could be just what the doctor ordered. Like your best childhood memories, it’s always summer in Kidda’s world – the sonics of brooding melancholy are anathema here. This is non-stop irrepressible sunshine – an almost evangelical happiness bounding like a Labrador pup through every song. Hints of Go! Team retro and Fatboy party vibes make for lots of feelgood fun. (NC)

EP: THROWING SNOW •
Shadower/Sanctum (Sneaker Social Club)
Throwing Snow’s new EP is a 90s-inspired take on dubstep, which sees him utilising old house sounds and snippets of soulful vocal to create ‘Shadower,’ a nostalgic masterpiece which will stir the memories of anyone who remembers rave music before it was pre-cursed with ‘nu.’ Weaving through percussive basslines and surging melodies, ‘Shadower’ takes the listener on a voyage of rediscovery we didn’t know we’d forgotten. B-side ‘Sanctum’ is a heavier beast, darkly atmospheric and strangely addictive. (JMM)

ALBUM: VARIOUS
Home Taping Is Music – Volume 2 (Woodland Recordings•)
The second instalment of the ‘Home Taping Is Music’ series compiled by the good folks at Woodland Recordings brings together 15 tracks by a whole host of artists. Included are the likes of Jane Bartholomew, The Great Park and Mute Swimmer; with highlights being Thirty Pounds of Bone’s sorrowful lament ‘Homefaring’ and the hauntingly beautiful folk ballad ‘Fare Thee Gentleman’ by Lucy Parnell. It’s limited to just 100 copies, all lovingly hand-stamped and packaged, so best get in there quick before they all go. (IC)

EP: VC • The Trick (Donky Pitch)
Local label Donky Pitch are committed to bringing innovative electronica to Brighton and their third release is by Helsinki-born VC, one of the best skweee producers around. That’s electronic-based hip hop to the uninitiated: entirely instrumental, featuring clean, simple basslines overlaid with funky, raw synths; a mix of vintage instruments with progressive rhythms. Six-track EP ‘The Trick’ is testament to the versatility within the genre, and is alternately bass-heavy, as on ‘Kind of Bad’ and slow-building, as on glitch-fest ‘The Trick.’ (JMM)