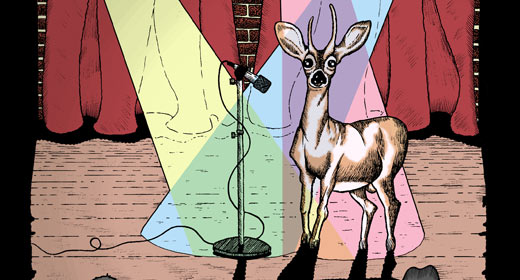 The Reasons
I have always been thought of as funny. It might have had something to do with being an ugly teenager – you compensate. I’m a frequent ranter, whether it’s about politics or the fact that you should never wear leggings like proper trousers, and I’m always being stopped (quite rudely) mid-flow and told I should be a stand-up comic.

During university I nearly signed up for open mic nights on a fortnightly basis, chickening out just as frequently. I was not the best public speaker, which put me off, and the thought of performing in front of a crowd of my inebriated peers filled me with dread. I remember giving an English presentation about Roald Dahl at school and freezing for two solid minutes out of the allocated five minutes. Absolute nightmare.

After uni I decided to train as a barrister, although for reasons I won’t bore you with I decided not pursue it as a career. It did, however, leave me with some pretty solid public speaking skills and a complete lack of shame. I was finally ready.

The Experience
When you tell people you’re going to do stand-up, you find out that all of your friends can form a six degrees of separation-type link from themselves to an established comic. It’s one of life’s little known phenomena and consequently I had contacts coming out of my ears. Obviously I am not about to go around Facebooking professional comedians I don’t know. That could come across as bit stalker-ish. Quite apart from that I had no idea what I would actually ask them; maybe, ‘How do I be funny?’ Don’t think so. I decided to go it alone.

I found a suitable comedy night, the Top Banana Comedy Club at the Rose Hill Tavern near London Road. I had never been to the night before so I had no idea what I would be letting myself in for.

On the day of the gig, I was a state – nothing I had written down was at all funny. I stared at my scrawled notes (made a week previously and barely looked at since) for ages. What did they even say? How could I speak in public without having somebody to call Your Honour? What the flip was I doing? The latter, in capitals followed by four question marks, was my Facebook status as I made my way to the venue.

When I arrived at the pub my fears about performing were replaced with the sudden, intense and irrational fear of sitting in the wrong place, squeezing past tightly packed tables to the stage and then having to explain why I thought I should sit with the audience. The crowd was pretty tiny, most of them were my supporters so this fear was as insane as it sounds.

I eventually found the other comedians who were due to perform. They gave me helpful advice such as ‘just cry, that usually gets a laugh. So does nakedness’, but they were friendly and put me at ease. I was third on the bill so it gave me the opportunity to watch some of the other comedians and get a feel for what the audience was expecting. I quickly learned that while they were funny and had obviously done this before, none of them were exactly Michael McIntyre.

When it was my turn to go on, the compère gave me an excellent introduction, which may as well have consisted of the words ‘please be nice to this girl, she has no idea what she’s doing’ so the audience were prepared for total failure. They had their pity laughs ready. All of my supporters had bought me drinks, and had lined them up in a nice row, so I could plunge myself into oblivion as soon as got off stage; such was their concern.

When I finally went on, I wasn’t nervous at all, the two glasses of wine I’d drunk before taking the mic helped, as did the knowledge that in five minutes it would all be over. I started to speak and nobody booed or threw anything. Amazingly, people laughed – genuinely – and I found the confidence to ad lib. I managed to remember my whole five-minute set and didn’t even hit myself in the face taking the microphone out of the stand. The organiser was very concerned that I hadn’t practised that bit.

It was over very quickly. Backstage, one of my fellow comedians (I’m a comedian now, you see) fist-bumped me and I was chuffed to bits when act number four on the bill asked me ‘Was that really your first gig?’

I was then able to relax and watch the rest of the show. The standard was varied but over all not bad for a free gig in a pub. The headliner, Rosie Wilby, was hilarious and quite rightly showed everybody how it’s done. By that time I was nicely tipsy but I was still asking my entourage, ‘Are you sure it was any good?’

Was it worth it?
In a word, yes. It’s exactly like anything you do for an adrenalin rush; really scary beforehand then afterwards you want to do it again immediately. Comedy is, however, safer than throwing yourself off a cliff or out of a plane. I still can’t believe I did it and cannot get over the fact that I didn’t suck at it.

Even if it had gone really badly I think it still would have been worth going through the fear. I had plenty of opportunity to back out but knew that I would regret not doing it much more than I would have regretted being booed off stage and crying in a toilet. Plus I got to take home a flyer with my name on it.

Since it went so well I might even do it again, I hear that Rabbit In The Headlights at Upstairs at Three and Ten is a good gig, so maybe I’ll give that a go.