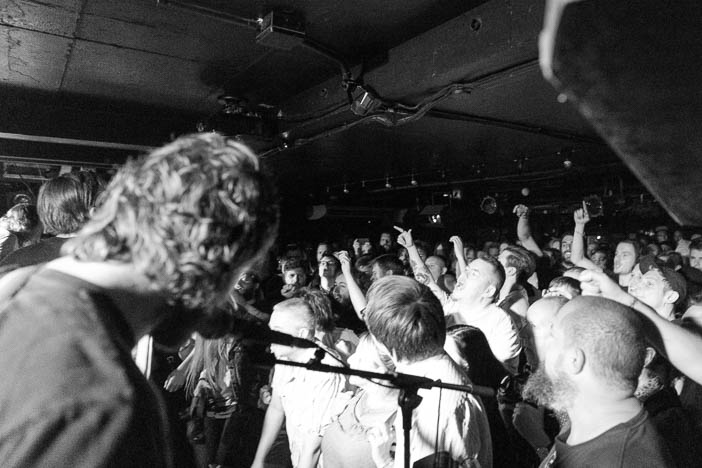 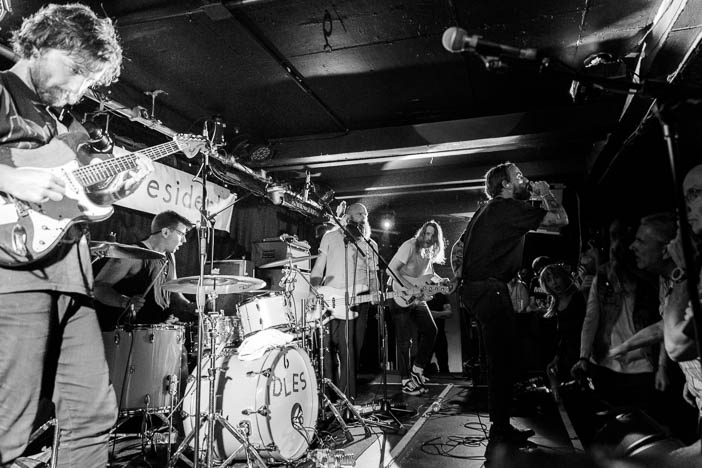 With a tightly-guarded ticket list and a snaking queue onto the street outside, a tangible sense of anticipatory tension, uncertainty and thrill surrounds Idles’ early evening takeover of Komedia’s dark downstairs cavern, expanded from an in-store to accommodate demand.

Put on for fans who have bought new album ‘Joy As An Act Of Resistance’, there’s a whisper the band might have enforced an over-demanding schedule on themselves, having been minded to test the speakers and door hinges at a shop in Portsmouth earlier in the day. Their earlier soundcheck here, though, is said to have comprehensively allayed any concerns, with reports of a clobberingly loud, Swans-style tune-up. 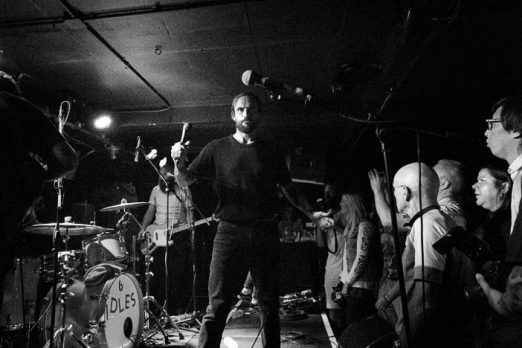 Despite Idles being in the house, a lengthy wait ensues. The delay adds to the feel of this being a fully-fledged show rather than a passing promotional opportunity, and gives the room time to steadily morph from sparse post-work buzz to packed and expectant mob. Sure enough, within the space of half a song, these knowingly brutal Bristolians set a ferocious tone for a measured yet destructive display of near-carnal force.

Looking something like a cross between a Victorian malcontent and a revolutionary pirate, chief Idle Joe Talbot takes his responsibilities seriously and makes no secret of his troubled past – these days, he’s an eloquently persuasive poster boy against internalising and compounding personal problems. ‘1049 Gotho’, introduced by Talbot as a description of depression, sees him worry about possessing a body and mind unfit for life’s trials, but also blindsides with its grisly eroticism (“I pissed in the sink / As she slowly undressed”). 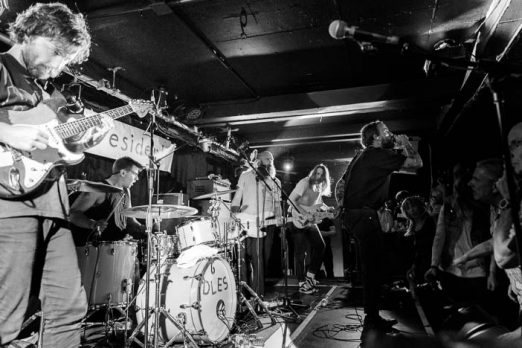 As they batter their guitars and drums, all five members strike a picture of cheery, violent relentlessness. They’re furiously impressive, not least on the unbridled anger of Talbot’s tribute to his mother, on which he decries the trappings of poverty and suggests Tories fear rich and educated enemies. Still, for all his cathartic anger and volcanic philosophising, this is more than an extended therapy session, becoming a generous round of request-taking from the pit, interspersed with the odd gutteral barb.

Like Slaves, their fellow punk snarlers to have played at the invitation of Resident recently, Idles combine a consistent vehemence with a certain inscrutability. As the album title suggests, they want to promote liberal openness, dialogue about social and political divisions and, optimistically, love. But doing that, for Talbot, inevitably entails singing about the things he hates – Brexit, inequality, toxic masculinity, elitism. 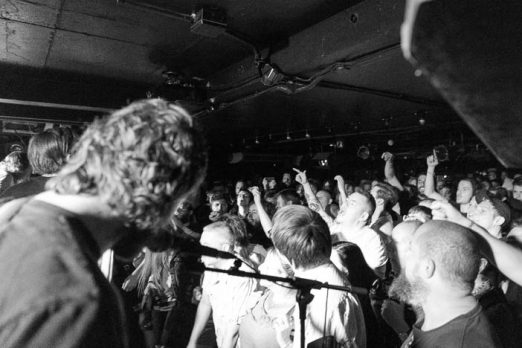 By the time they roll out ‘Danny Nedelko’, their single written for the Ukrainian leader of the band Heavy Lungs, providing a personal swerve on the voice lacked by immigrants, the atmosphere is approaching genuine anarchy. It has, says Talbot, made them feel like The Beatles. When he thanks security staff for keeping everyone safe, it’s sincere.

Part of this incendiary mood is down to Idles’ more composed sections, when they show a taste for the haunting and cinematic, tensely building into successive explosions of rage and wit. Without the unexpected illness of someone connected to the band, explains Talbot, their set would have gone on longer. Viewers at the front, where a full-on pile-on seems in motion, might be glad to get their breaths back.