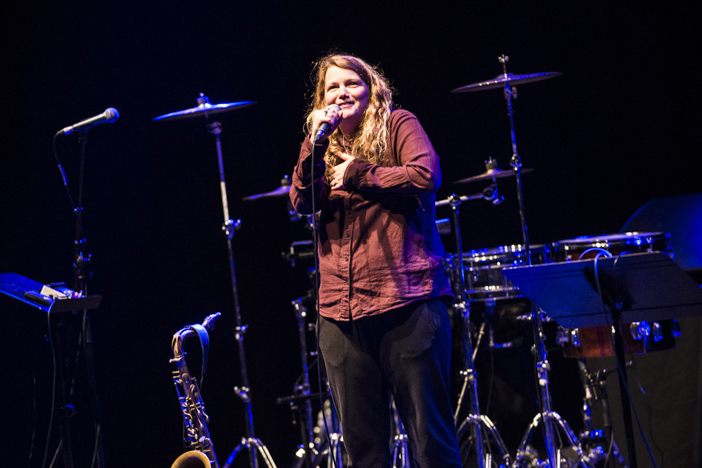 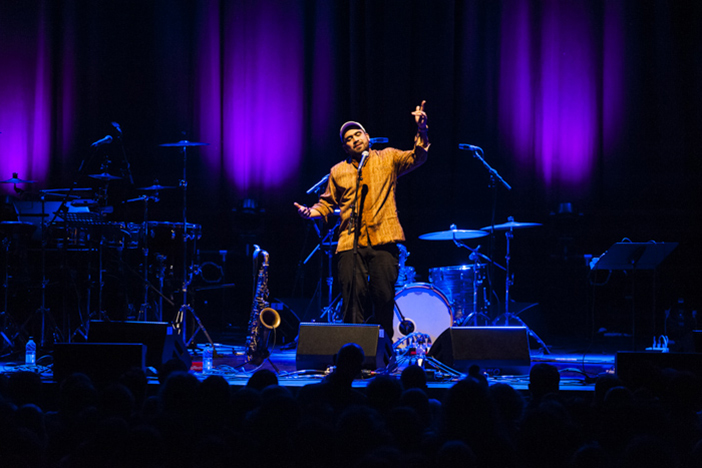 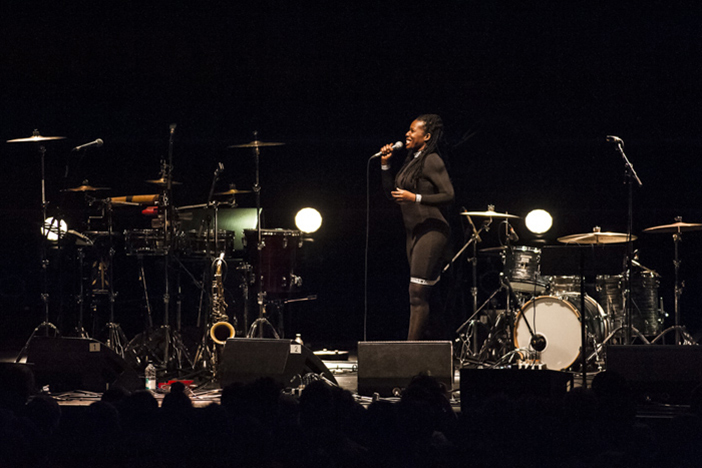 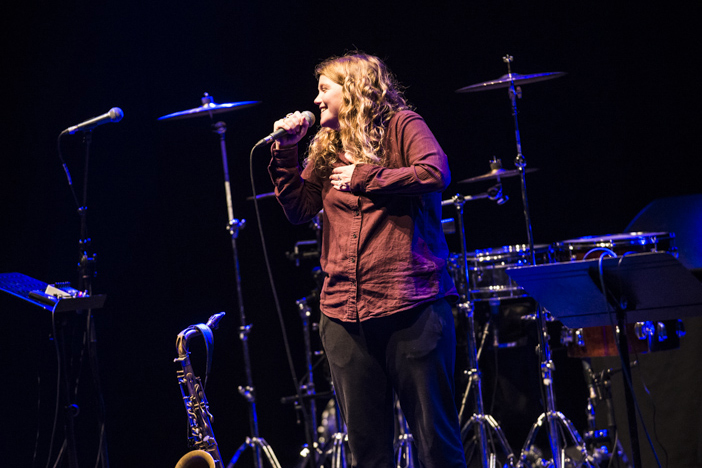 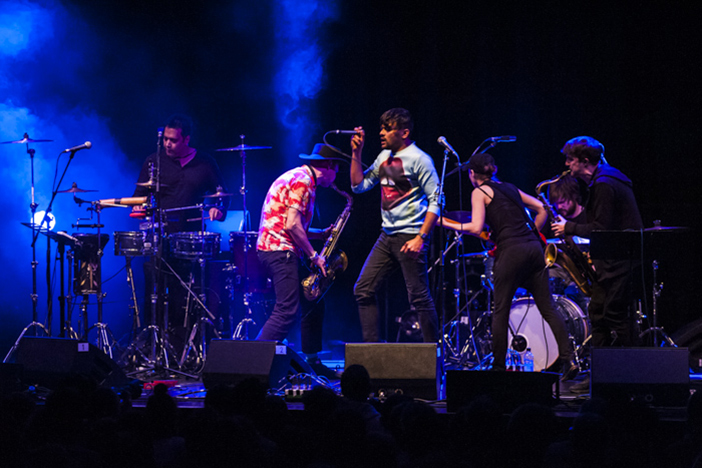 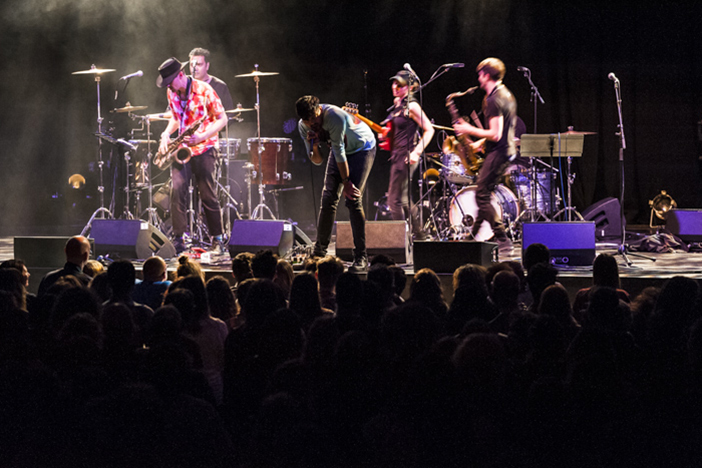 Just as she’s taken the world by storm in recent years, her opening gig was a short sharp burst of everything she’s become known for – a whirlwind that’s so far from a cacophony – her heartfelt words and observations offer societal clarity that will be imprinted upon you for a lifetime.

Just as she said when we caught her during her last outing to Brighton (which we reviewed here), it’s important for people to come together, and did they ever. Brighton Dome was packed to capacity, with a standing crowd below the stage, first-come-first-served seating behind that, and an overflow of people standing behind them. This really was a gathering, a celebration, and a momentous festival launch for all.

Kate took on the role of compère to introduce two poets and a band, friends and festival highlights, but kept her role brief, instead allowing her guests’ artistry to do the talking. An advocate of people coming together to make the world a better place, she made a point of revealing a scheme of £5 and £10 festival tickets, so people who have more, can cover the cost of those who don’t. She wants the arts to be inclusive for all. 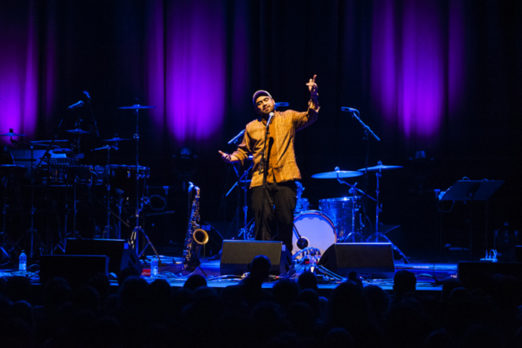 First up was Australian poet Omar Musa, whom she met in Sydney. Omar’s of mixed ancestry and from the small New South Wales town of Queanbeyan, known as ‘Struggling Town’. He spoke of disaffected youths, politics and racism. Like Tempest, he’s been heralded for his work as a poet, rapper and novelist.

Before we heard his poems, he spoke of Australia’s Ride With You scheme, a movement supporting and reducing the stigma and racism towards Muslims. He spoke of how he didn’t quite look “Muslim enough” being half-white, half-Asian Muslim. Even without the offers of a ride, at first, the movement was empowering for thousands of people and clearly touched him.

His poetry revealed the lives of disaffected youths, and touched on Australian politics whilst making comparisons to Trump and Brexit, all the while humorously filling in the gaps for all the bits “lost in translation”.

His poem applauded “numberless undergrounds”, like Kate Tempest, who are “more than statistics / more than misfits”, receiving huge applause. 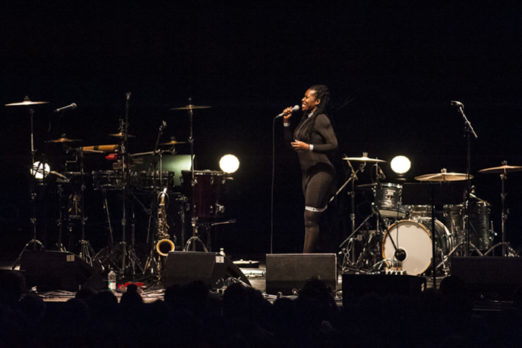 Next up was Kat Francois, again with powerful observations of people and society that align with Musa and Tempest. Her performance piece, a poem taking on the world with the repeated line “the truth is tongue tied / the truth is blind”, was both moving and captivating.

Kat was the first person to win the first televised poetry slam on BBC3 in 2004, and she’s championed by Kate Tempest. As well as a poet and spoken word artist she’s also a theatre director, actor and comedian. Her critically acclaimed play Raising Lazarus has been brought to Brighton Festival following a sold-out performance at London’s Roundhouse.

“What happens when words are not written to be together, but come together?” Kate asks when she comes back on stage. She then rounds up the poetry with an epic medley of her best work. It’s a tour de force to resonate with her captive audience, and although without break or interlude her words “Caught sniffing lines off a prostitutes prosthetic tits / And it’s back to the House of Lords with slapped wrists / They abduct kids and fuck the heads of dead pigs / But him in a hoodie with a couple of spliffs – Jail him, he’s the criminal” from ‘Europe Is Lost’ and “Happiness the brand is not happiness” from ‘Hold Your Own’ are met with great cheer, applause, whooping and a standing ovation.

At the end, with barely a breath left, she introduces the last act and informs us she won’t be back on stage as it makes her cringe for all the acts to bow down together. 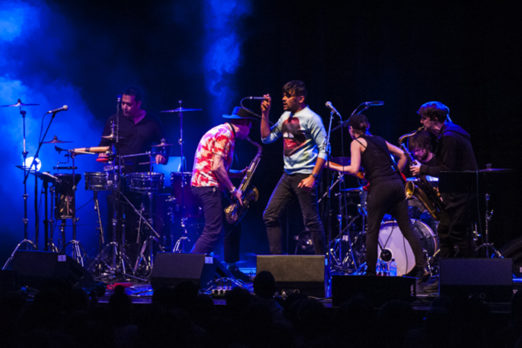 “This is Melt Yourself Down, and please do!” Kate says as she exits the stage for good. Kate’s performances are guaranteed to leave you tingling, and what better way to shake that feeling off than having a dance to the upbeat carnival-style South London ensemble. They’re jazz, funk and world music rolled into one, and they leave us ready to stomp on to our next festival highlights.

Francesca Moore’s passion for the performing arts has seen her photographing live stage events for the past ten years; shooting at intimate venues and major stage events for a range of editorial clients, and with the production of limited edition fine art prints. Her personal work stems from interests in people and the environment, where she draws on her scientific background to portray humanitarian, social and environmental issues. She began contributing to the SOURCE after a permanent move from London around the time the magazine was dropped for an online only presence. She’s assured there’s no correlation.
← PREVIOUS POST
Artists Open Houses Review
NEXT POST →
Week One of Brighton Festival and Fringe 2017
Mailing List
Recent Posts
Website developed in Brighton by Infobo
Copyright © Brighton Source 2009-2020
Kate Tempest’s Opening Gig Review - Brighton Source