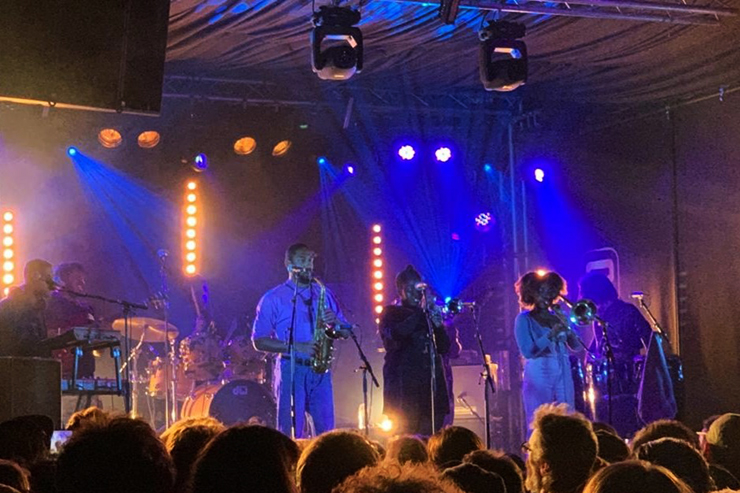 At a sold out Concorde 2 on a Tuesday night, the crowd are palpably excited by the prospect of seeing eight-piece Afrobeat collective KOKOROKO, who are currently at the forefront of the new afro/jazz scene emerging in London.

The slightly altered line-up just about all fit on stage with their respective instruments and launch into a meandering version of ‘Uman’ from their debut EP, with impressive solos from the guitarist, saxophonist and drummer, before leading lady Sheila Maurice-Grey and trombonist Richie Seivwright sing the refrain “Uh-man”, which would be lodged in the minds of many in the crowd for the rest of the night (and the next day)!

The brass trio, front of stage, double as dancers, picking up tambourines and tone blocks when they aren’t blowing their horns. The following track showcases the skills of the trombonist, followed by an exceptional interlude on keys by Yohan Kebede.

Halfway through the set Maurice-Grey asks the crowd “are you ready to dance?”. The reply is a resounding “YES” as she guides us through a shuffle to the left, a shuffle to the right, winding down to the floor, back up, then “HALT”! We stop. The music stops. Then the music begins again with Maurice-Grey belting out a fantastic trumpet solo.

Throughout the 75-minute set, they played a total of five songs, making it feel like a Fela Kuti-esque, extended jamming session, with the musicians, who are undoubtedly at the top of their game, experimenting and playing off each other, but perhaps not always engaging the crowd. Perhaps they could have benefited from mixing it up a bit and playing more material. The omission of their most popular track ‘Abusey Junction’ was a glaring one and they left no time for an encore sadly, leaving the audience somewhat unsatisfied.