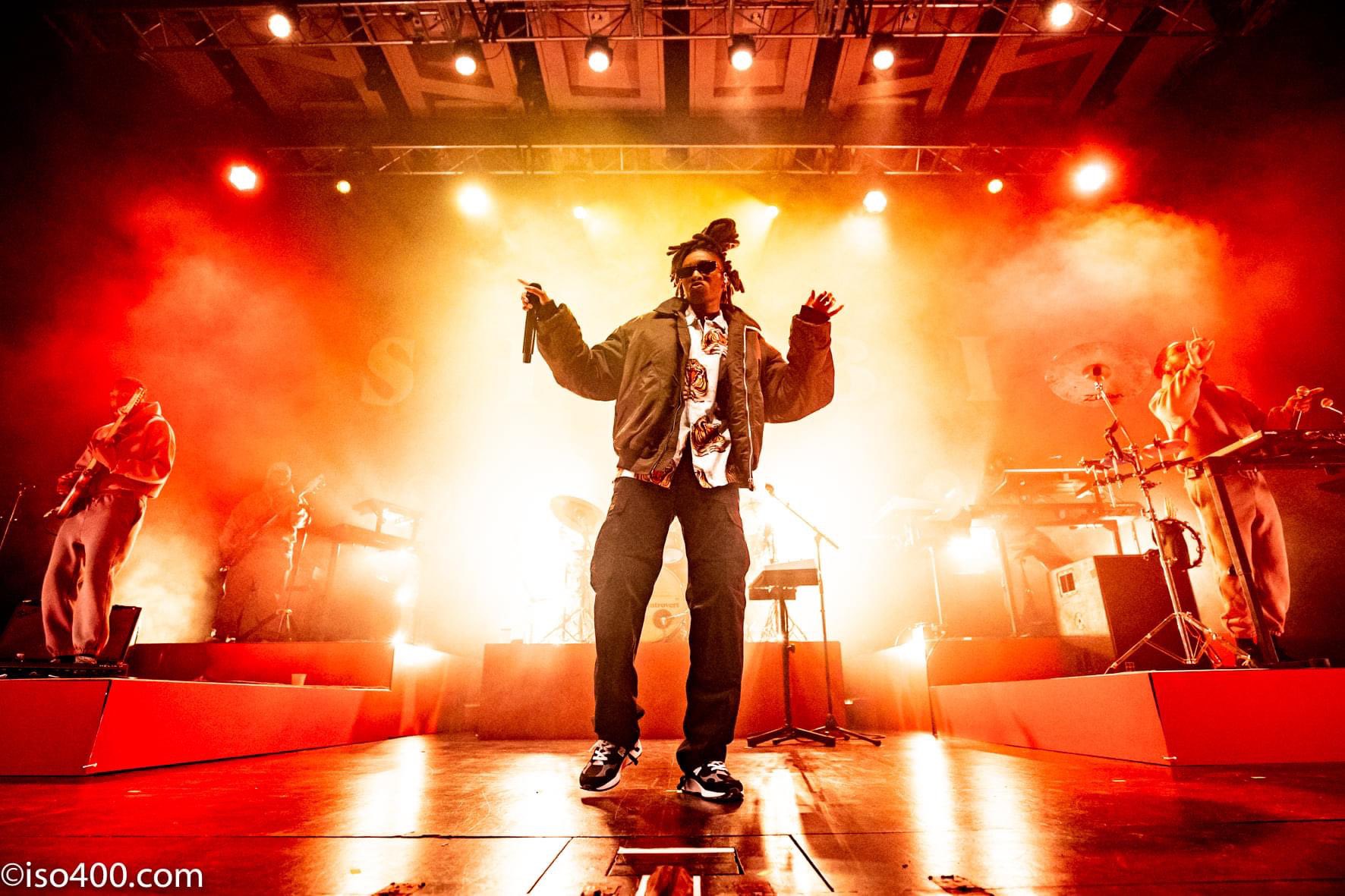 Fresh from winning a MOBO award for Best Female Act and endorsed by the likes of Kendrick Lamar, as well as her latest album ‘Sometimes I Might Be Introvert’ topping many end of year ‘best of’ lists, it’s fair to say this is Little Simz’ time to shine. However, she’s no newbie to the game, this being her sixth album since 2014, as well as her brooding, pared back EP ‘Drop 6’ last year and that’s before mentioning her acting role in Top Boy and soundtrack for Marvel’s Venom. Her creative output belies her youth (she’s only 27) so imagine what stratospheric heights she’ll have reached in ten years’ time.

At her second show in Brighton this year, having played a Resident outstore at Chalk in October, the sold-out Dome was teeming with excitable youngsters, middle aged couples and even parents with their teenage children, reflecting her broad appeal, which is no mean feat for a UK rapper, especially a female rapper in a male-dominated scene. Given the new Plan B Covid restrictions, proof of vaccination or a negative test were required for entry and many were wearing masks in the bar area. There was a certain sense of deja vu that this might be the last chance to see live music in a while… again.

Bang on 9pm, the lights went down and six columns of spotlights lit up the stage, revealing the acronym of her album title and the nickname she goes by, SIMBI in huge block capitals, and the tracksuit-clad band: two guys on keys, a drummer, and electric and bass guitarists. The disembodied voice of The Crown actor Emma Corrin came over the speakers to welcome everyone for tea, echoing the narrative interludes that run throughout the album, like the posh inner voice of Simbi’s consciousness asking her the tough life questions.

Simbi walked on (or should we say swaggered on?) in black combat trousers, bomber jacket and shades, sticking to the casual, masculine style she’s become known for. Her dazzling smile lighting up the room, she greeted Brighton warmly and broke into the cinematic album opener ‘Introvert’, her instantly recognisable rap style cutting through the music of her well-rehearsed band. She brought an infectious energy to the performance that translated to the crowd, they were putty in the palm of her hand and broke into spontaneous applause on several occasions.

The repeated words in ‘Two World’s Apart’ delivered in a laid-back flow against the background tenor vocal, was followed by the forceful, relentless energy of ‘I Love You, I Hate You’, which she has described as “the story of abandonment”. She then played ‘Speed’ spitting bars upon bars, every word crystal clear, while pacing up and down the stage, doing synchronised shimmies with the band and even playing a few notes on the keyboard.

The lyrics of ‘Standing Ovation’ tell of her ambivalence to fame, “Why the desperate need for an applause? I’ll wait” are ironically met with… a standing ovation. This is followed by ‘one life, might live’ from ‘Drop 6’ with the bass player coming down to join her centre stage before ‘Rolling Stone’ and an instrumental interlude.

Simz came back sans bomber jacket and shades, sporting a graphic print shirt (also a signature look). Act two opened with ‘Wings’ from 2015 album ‘A Curious Tale Of Trials + Persons’, and then ‘God Bless Mary’, which she dedicated to her old neighbour Mary, who put up with her constantly playing loud music. We can all thank Mary.

Things dialled down a notch for the beautiful, neo-soul number featuring the vocals of Cleo Sol ‘I See You’, which describes the full gamut of an intimate relationship and saw Simz seated on a stool between the two guitarists, plucking her own guitar. Her keyboardist was then introduced as OTG and took the limelight to rap on a bluesy piano track. She clearly wants to share the love but it fell somewhat flat.

Simz then took back control of the mic with ‘101 FM’ from previous album ‘Grey Area’ and the singalong-friendly ‘Selfish’, again with Cleo Sol’s vocals. A spoken word interlude preceded ‘Protect My Energy’ with its 80s inspired instrumental and she took a minute to thank her fans for letting her try something new – singing – saying “artists should never be boxed in”.

The West African-inspired ‘Point And Kill’ with the high-pitched voice of Obongjayar really fired people up; someone in the centre stalls was waving their crutch in the air, people in the circle stands were out of their seats dancing and a couple of women who must’ve been in their seventies were going for it. However, it all came to an abrupt pause when Simz noticed someone at the front had passed out and called for help, which came swiftly from a security guard, who carried the young lady to safety. After the recent horrors of Travis Scott’s Astroworld, it was reassuring to see a performer prioritise safety over their performance. As it happened, the lady was in the foyer after the show telling anyone who would listen that she was still alive, and receiving several hugs from relieved strangers.

After resuming the song, she told a story about a quest through the jungle with the moral of the tale being “never fear nobody”, highlighting that Little Simz is a consummate storyteller, in the great tradition of spoken word. After introducing the band, who all did solos, she passed a mic to a lad at the front, so he could rap along to ‘Misunderstood’. This kind of interaction with her audience is partly why her popularity has rocketed and why this particular audience were chanting “one more song” after she’d left the stage. They got not one, but three crowd-pleasers: ‘Might Bang, Might Not’, ‘Venom’ and ‘Woman’, the hugely successful female-empowerment anthem with Cleo Sol.

Talking of female empowerment, Simbiatu Ajikawo is a woman who is infinitely comfortable in her own skin. She knows she has talent and charisma in abundance and she’s not afraid to demonstrate it, all the while remaining likable, humble and grateful to her supporters. It’s not often you see a woman, in particular, who has the cast-iron confidence and swag of many of her male counterparts in the hip hop world. Simbi is in her own lane and destined for greatness.