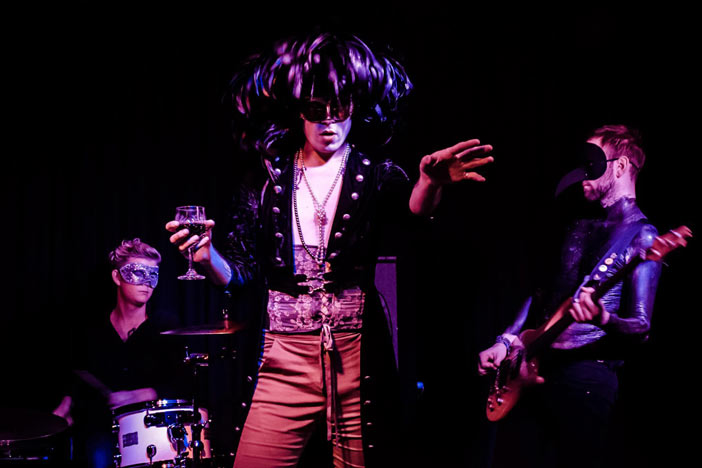 Single: Apples & Eve
‘L’Homme (The Man)’ (Amazon Records)
Apples & Eve used to be a duo of honey voiced singer Eve Rose and drummer Francine Perry – who we’d guess was ‘Apples’, except Perry’s made from pears. Anyway, the addition of fiddler Jonas Aaron to the now four-piece band is the trump card on ‘L’Homme (The Man)’, his string work adding a fluid undertow to the verses, lifting like a kite after each lilting chorus. It’s a stirring blend of English and American folk influences, but not, surprisingly, French. (SH)

Single: Black Black Hills
‘Far From My Arms’ (blackblackhills.com)
It’s been coming for a while but this is Black Black Hills fully embracing the crooner that Sammy Aaron Jr has been playing with for some time. A proper love song, from the bottom of BBH’s heart, there are no whoops or screams or glitches, just a pure vocal performance with subtle organ backing that crescendos in the most gentle way. If this had been on Nick Cave’s new album we wouldn’t have been disappointed. Pope Joan seem like a long way away now. (JK)

EP: Pink Narcissus
‘Blood On The Page’ (reverbnation.com/pinknarcissus)
Sidelining the carnival theatrics of their earlier releases, the six songs on ‘freak rock’ band Pink Narcissus’ strong new EP are their most immediate yet. However chaotic their innumerable gigs become, the band’s glam-punk sound has only grown sharper. Poet and frontman Oli Spleen is at his most open and loving on ‘Victim’, while the metallic guitar lines of ‘Orphan Eyes’ find the band at their most melodic. There’s a launch party with oddball allies Birdeatsbaby at the Blind Tiger on Tues 12th (SH)

Single: Sumsuch
‘This Old Town’ (Apollo)
With all proceeds going directly to Mind, the mental health charity, this is a single with a purpose, created in memory of a good friend of the producer. ‘This Old Town’ features delicate piano chords that layer over downtempo emotional beats with shaking, tentative moves into each verse. The gentle and unsettling vocals are courtesy of Matty Eeles, formerly part of Alice Russell’s band. Disclosure Project’s remix makes the song into a meaty anthem. (JMM)

EP: Woodland Blue
‘Safehouse’ (woodlandblue.bandcamp.com)
The woozy folk of ‘Safehouse’’s title track has an enveloping style that is instantly calming and Cordelia Gartside’s innocent vocals make it sound like something you’d hear around the campfire in a half-remembered dream. The rest of Woodland Blue’s EP is equally downtempo, taking indie music out of skinny jeans and into the forest. ‘Map Of The World’ showcases the band’s vocal section and a strength that isn’t forced in the other songs. As a debut, it’s very promising. (JMM)

Sometimes an article is a bit of a team effort, and those are tagged SOURCE Writers. If you’d like to be part of that team, hit the Contact link at the top and get your work on this website.
← PREVIOUS POST
Supercharged Review
NEXT POST →
Colin Wakefield, Unsung Hero No.38
Mailing List
Recent Posts
Website developed in Brighton by Infobo
Copyright © Brighton Source 2009-2020
Locally Sourced, March 2013 - Brighton Source