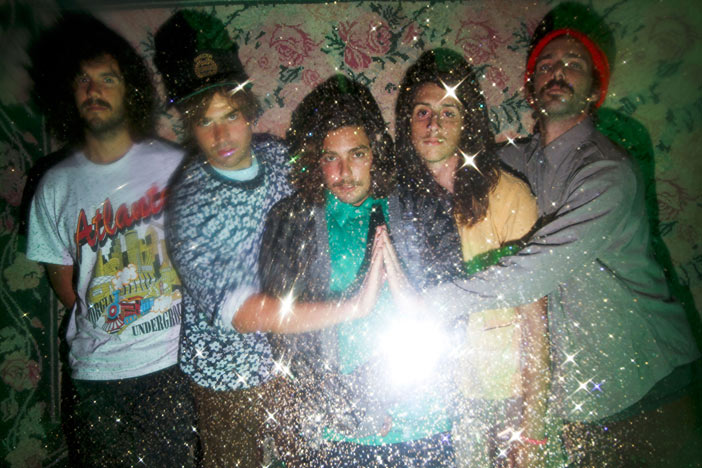 Album: The Growlers
‘Hung At Heart’ (FatCat)
Known on Newport Beach in California for their lavish parties and love of surfing, The Growlers’ West Coast roots shine through on ‘Hung At Heart’. Dreamy, breezy tones hit from start to finish, teased by muffled distortion and moody echoed vocals akin to The Strokes or someone singing with a blocked nose. In places you may feel like you’re trapped inside a fairground haunted house but overall it’s pleasant, evoking nostalgia for 60s B-movies, spaghetti westerns and ‘spooky’ horror flicks. (TLB)

EP: Heavy Dancers
‘Paradise Bungalows’ (Tattle Tapes)
Self-declared ‘unpop’ group Heavy Dancers are obliterating the indie band cookie cutter. With an instrument collection that includes a melodica, a saxophone and a Korg Monotron, it’s to be expected that their sound would be richer and quirkier than their contemporaries, but this EP surpasses any expectations.It’s suave stuff, with Britpop vocals and sashaying, rollicking rhythms under upbeat melodies, while title track ‘Paradise Bungalows’ is the kind of song that’ll stay in your head for days. (JMM)

LP: Hot 8 Brass Band
‘Tombstone’ (Tru Thoughts)
A modern take on the historic New Orleans second line sound, Hot 8 Brass Band have overcome many tragic hardships, from the death of former members to the devastation Hurricane Katrina wrought when she passed through their city. Such tragedy seems have had a profound effect on their music, as the pure joyful celebration of life that comes through is staggering. Single ‘Milwaukee Fat’ is typical of the whole album, a rambunctious party track with infectiously energetic instrumentals and the occasional lyrical outburst. (LL)

EP: JetPack Elastic
‘Not So Black And White’ (jetpackelastic.bandcamp.com)
Prolific Brighton rock band Jetpack Elastic have been gigging for years, and have built up plenty of experiences and material for their first EP, ‘Not So Black And White’. For a debut, it’s surprisingly accomplished. Vocalist Lucy Holland brings a timelessness to the songs, expressing languid distaste and utter power with equal credibility. ‘Right Side Of The Bed’ typifies Jetpack Elastic’s sound; it’s sultry, energetic and rammed with stylistic flourishes. These people were born to make music. (JMM)

EP: Platypi
‘Something Tangible’ (Numerology)
The first release on new label Numerology Records comes from Platypi, a producer who’s been crafting chillout tunes as a sideline to being an integral part of Brighton band Almighty Planets. His debut EP is influenced by the likes of Onra and Bonobo, with soft electronica floating above slightly offbeat hip hop rhythms. The standout track from this release is ‘Lassitude’, which weaves snippets of vocal samples over a tense backdrop, creating a sound that’s beautifully addictive. (JMM)

Sometimes an article is a bit of a team effort, and those are tagged SOURCE Writers. If you’d like to be part of that team, hit the Contact link at the top and get your work on this website.
← PREVIOUS POST
The Stick Up
NEXT POST →
Well Rounded Interview
Mailing List
Recent Posts
Website developed in Brighton by Infobo
Copyright © Brighton Source 2009-2020
Locally Sourced, May 2013 - Brighton Source