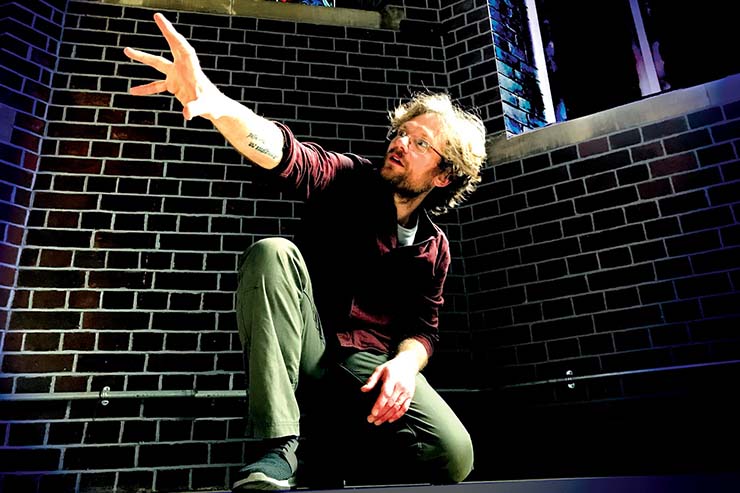 Merlin in the Wild Wood

Any solo performer who can weave fantastical tales drawn from myth, legend and history – and captivate an audience for two hours – certainly deserves an Oscar. In which case Brighton-based Jon Mason should get a gong for this performance.

Storytelling, of course, is an ancient art. It’s not quite acting, it’s not quite reciting. It’s neither a lecture nor a speech. Yet, it manages to encompass all of these alongside the magical, mythical or ineffable. Jon describes the art as “embodying the character” and being “enveloped in these emotions”.

The evening started with Jon sauntering onto the stage. He’s an ordinary bloke, and suggested we lock our car or bike and enjoy some time in the woods. Perhaps he’ll tell a story or two. What fun! The exposed brick and pale lighting at St Augustine’s Arts Centre provided an ideal venue for his tales.

The story encompassed love and hate, wars and invasion, oppression and revenge, all set in fantastical mythical contexts stretching back centuries. Jon drew from the Welsh heritage (in the Mabinogion), Irish folklore, as well as old English myths of Merlin and King Arthur. Even without that backstory the tales he tells are bewitching. In places it can be complex so sit back and don’t expect to catch every detail.

We followed tales of murder and pillage that went back a millennium. Merlin and Gwendoline (as the English later named them) were hanging on, sharing stories and prophecies, hiding in the forest. Then tree stumps began to resemble distorted human faces encrusted in grime. Watch out behind you! 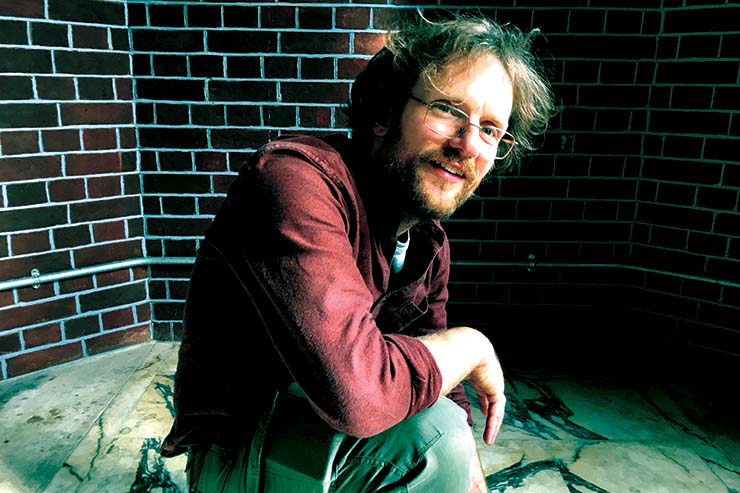 Our storyteller takes another turn. It’s as if we are sitting round a campfire. “I will tell you of this man in Ireland whose tale was like my own…” Jon captures the spell, his voice conjures the pictures, his tone reveals the emotion. There are no phoney sound effects. In our head we already hear the clash of swords and shouts of combat.

“We go into vengeance, war and battle” our storyteller now tells us. And we believe it. We can imagine the furies, the Goddess of vengeance, beside him. But this tale also hints at love and loss and re-unification. Can no-one find Merlin’s love or bring her back from the underworld?

Later, our narrator falls on all fours. “I have had dreams I must flee, away from those who chase me…my lungs burst in my chest…” We can almost see blood on the lips of two wolves as they fight and play in the moonlight. Are they animal or human? Our storyteller leaves it open.

Jon has studied history and archaeology and draws links between storytelling, landscape and community activism. Watch out for his gigs throughout the year and a radical history tour during the Brighton Festival.

This is wildly ambitious exuberant storytelling.

Mike lives in Brighton. This is a full time occupation. He's also a researcher, writer and activist. Any time left over he spends hanging around cafes and pubs listening to people on their phones. He loves theatre that pokes into difficult places. You won't find him on Facebook.
← PREVIOUS POST
Reach for the Lasers
NEXT POST →
Bonobo, Tues 3rd May