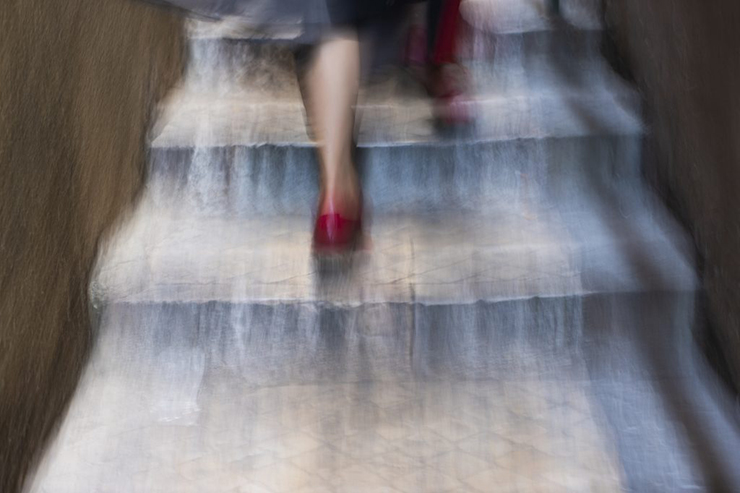 An arresting image of a pair of legs ascending a staircase, red shoes blurred in movement, draws us into 35 North Gallery, and the first solo exhibition of Brighton-based photographer, Lyn Holly Coorg. Entitled ‘Moving Still’, the show is an engaging display of this artist’s multi-faceted talent.

As she takes us around the exhibition, Lyn’s commitment to her art is immediately apparent. She confirms our initial impression of the first photograph we see, ‘Lisbon Steps’, that Gerhard Richter is an influence on her work, and goes on to explain the rigours of photography. “I’ll take a hundred shots, maybe more. And maybe one is worth keeping.”

Born in Worthing and growing up in Canada, her interest in photography began when she was given a Brownie camera. Later, combining a career in specialist teaching with a growing desire to capture her own visual take on the world around her, the pictures she took became increasingly experimental. The name of the exhibition itself – ‘Moving Still’ – starts to take on multiple meanings. The disjunct between movement and stillness; the ambiguity of the word ‘moving’ itself, with its connotations of both motion and emotional impact. And ‘still’: motionless or quiet, or up to now and into the future – or perhaps a combination of all three. 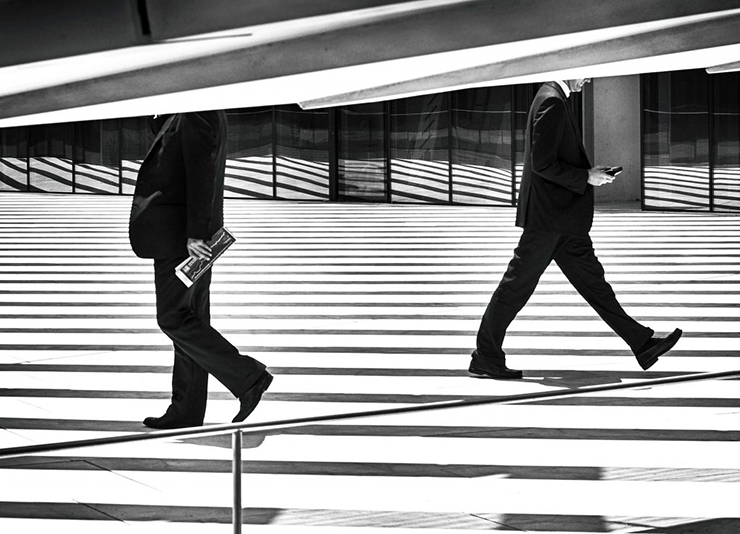 Lyn has travelled widely. Apart from ‘Lisbon Steps’, other photographs were taken in Portugal. ‘Almancil Wall’ is a powerful image of orange plaster against a Mediterranean blue sky, the complementary blocks of colour, bold and stark. ‘Lisbon Men’, in contrast, is a black and white image of two businessmen crossing a square, the event – both ephemeral and spontaneous – captured after, as she puts it, “much watching and waiting”.

A similar ‘decisive moment’, as Henri Cartier-Bresson put it, is captured in a picture called ‘Hong Kong Players’, where the young basketball players’ feet are frozen, centimetres away from the wooden floor. Other photographs were taken in Morocco, Australia, England, Holland and the US. All are intriguing.

The images draw you in: through the multi-coloured panes of a Marrakesh window; into the Hockney-like shadow and glare of an empty pool; along with the moving lights of London and Nevada. And then there are the photographs taken closer to home. An impressionistic shot capturing of the cast-iron struts beneath the Palace Pier, for instance, and, perhaps most striking of all, an evocative glance through the steamy window of the Basketmakers pub. The exhibition continues until the end of the month. We recommend a visit, but if you aren’t able to, then you can see more of Lyn’s work here.

As for the gallery itself, it is a gem. Half way up North Road, the space has large windows and clever lighting that ensure the pictures are displayed to maximum effect. Husband and wife team, Sharon and John Whiting, an established artist in his own right, opened 35 North Gallery in September 2014. This year, apart from ‘Moving Still’, they have put on exhibitions by painter Ned Hoskins and renowned watercolourist Kate Osborne, as well as a show highlighting the best works by Brighton MET foundation students.

Next up, commencing 6th July, is an exhibition of the latest works by photographer John Brockliss. Entitled ‘Metamorphosis – Landscapes of Change’, the black and white photographs promise to be quite different from those we have seen today, revealing a stark landscape in constant change. We’ll certainly be there to check them out.

Paul Stewart is an author - mainly novels for kids - but his main love has always been live music. These days, the words that fill his head at gigs often turn into reviews for Brighton Source, the going-out bible for his favourite city anywhere, ever.
← PREVIOUS POST
Doves, Feeder, The Coral, Fri 26th July
NEXT POST →
Penelope Isles Interview