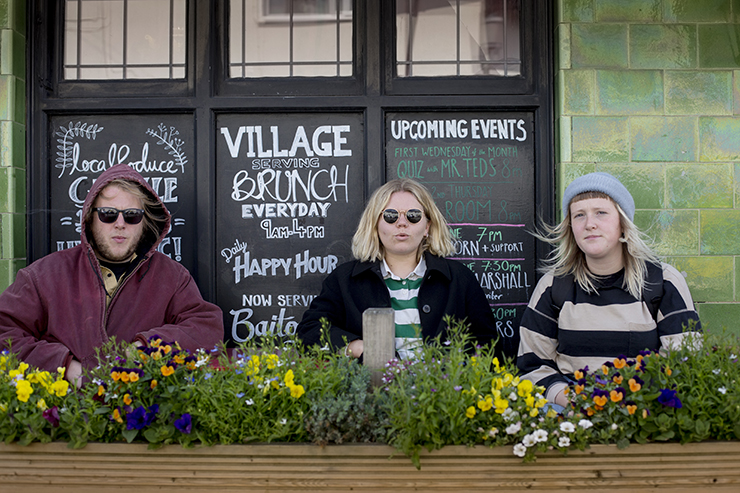 We don’t want to jinx anyone here, but it feels like Brighton (via the Isle of Man) band Penelope Isles are on the threshold of an incredible journey. And we don’t just mean their upcoming mega-tour.

Why? Because they have that rare and precious quality: crossover potential.

On Lammo’s Round Table recently, for instance, their single, ‘Leipzig’, nabbed nine out of ten from each of the diverse trio of judges. The panel included Gilles Peterson: a man not known for his love of dreamy, reverb-washed guitar rock. “It touches that special thing in my stomach that makes me happy,” he swooned. What more can you ask for, eh Gilles?

Musically, they’re sweet enough for the breakfast show, while their art-rock textures mean they’re also embraced by the left-field indie crowd. But at the heart of their broad appeal lies a magnetic personality. They’re a band you’d happily go for a pint with. So that’s exactly what we do. Although, for Penelope Isles, it’s a pot of tea and some orange Club biscuits, rather than beer. 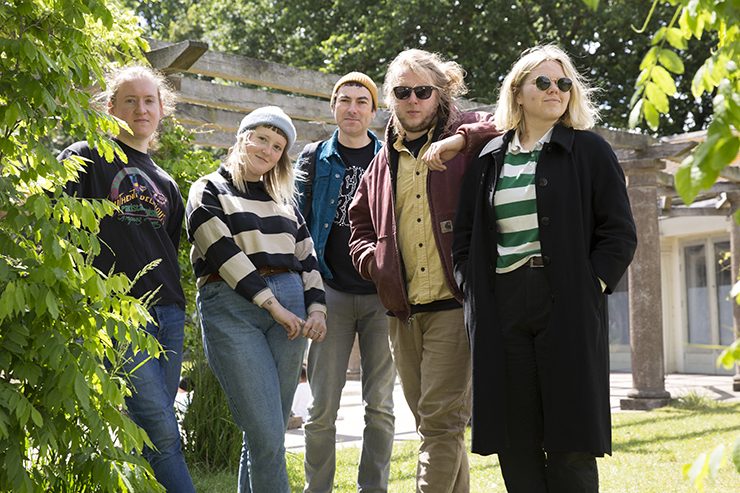 On a breezy early-summer Saturday, at the Village pub in Hanover, we begin with reminiscences about the previous month’s Great Escape, where we first see Penelope Isles downstairs at the Hope and Ruin on the Friday afternoon. The set-up’s basic; the sound is edgy, but simultaneously lucid and vibrant. The band are fantastic: a sonic club sandwich filled with 60s-inspired harmonies, held together with cocktail sticks of synth ambience and topped with a fizzing, thundering, ten-minute motorik jam-out, called ‘Gnarbone’.

“It felt like going out with no make-up on,” says Lily Wolter (keys, vocals, bass) about the gig’s intimate, rough-and-ready nature.

We love them so much at the Hope that we go to see them again the following night, at the Sallis Benney Theatre. Surely they can’t be that good again? They are even better. This time, the sound is thick, warm and lush, and the place is rammed. To us, it feels like a turning point. And they appear to agree.

“I felt it was probably our most special Brighton gig,” says Lily. “But then I also felt that at the Green Door Store at the Great Escape.”

Jack (Lily’s brother, vocals and guitar) agrees: “When we rocked up at the Sallis Benney, and started unloading the van, we turned around and all of a sudden there were about 400 people lined up down the street. And I thought ‘shit. I wonder what other gig’s on’. I couldn’t believe it”.

“Although at the end of the gig,” adds Lily, “I turned around and realised I’d left my croissant on top of the amp”. “So in all the photos there’s probably a croissant in the background, in a brown paper Co-op bag.”

The Sallis Benney gig, a showcase of Bella Union bands, also gets a psychedelic infusion from our favourite Lewis-based cosmic projectionist, Innerstrings.

“Chris [Innerstrings] is a legend,” Jack agrees. “He’s doing our show at The Haunt in December. He just makes it that much more atmospheric. He’s an artist. Maybe we could get him to do our Flaming Lips gig.”

Yep, that’s right. The Isles are supporting The Lips. They’ll be in Edinburgh with Wayne Coyne and chums in November. Naturally, they’re excited about that one.

“We would have loved to have done more shows with them, but we were lucky to get that slot,” says Jack. “Because they’re the kind of band who bring their friends along on tour. I’ve been watching a few live videos of them recently and they’ve got an elaborate set-up. I think they bring a truckload of confetti to the gig.”

“So we need to do something for our set,” adds Lily. “Something simple but effective. We’ve all got Bella Union boiler suits, so that might go down well. I’m thinking of bringing my tattoo stuff along. I bet Wayne will want one. On their last tour they had these balloons with ‘fuck yeah’ on them. He might want one of those done. Also, my boyfriend, Max, who does our sound, is the biggest Flaming Lips fan ever. He knows the name of every song. So he’s super stoked. He can’t believe it.” 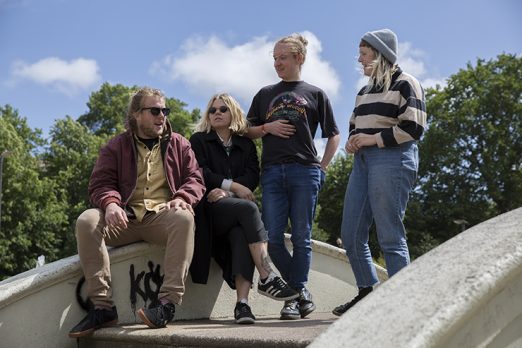 Flaming Lips aside, they’ve got a tour schedule coming up that, on paper, looks pretty hardcore. At this rate, they’re gonna end up like Fleetwood Mac in the late 70s. But have they given up their day jobs?

“Well Lily does tattoos and I do [music] production, so we’re freelance really,” says Jack.

“And I’m a baker, in Portslade,” chips in Becky. Presumably this is why she declines our offer of cake, in favour of a Club biscuit. “They’re really lenient about me going away on tour though.”

In fact, the tour schedule doesn’t faze them at all.

“We tour so much anyway, that it doesn’t seem that daunting,” says Jack. “And we’ve got quite a few breaks in between. Up until September, it’s mainly just weekends. But then all of October and November we’re on tour.”

They’ve got their label, Bella Union, to thank for sorting out the dates. Luckily, they all get on with Bella boss and former Cocteau Twin, Simon Raymonde.

“Simon’s dead sound. He’s one of the soundest people we know,” says Jack. “We’ve got a lot to thank him for. When we first met him, he cut us some keys to the Bella Union studios, at a secret location in Hove. And a year later, we had a record.”

Orange Club biscuits are unwrapped and dunked, as the sound of Neil Young floats across the pub. And the conversation turns to the band’s impending debut LP.

“We had some new songs that were on the list to put on the album, but we decided the ones we’d already released should be on the first album. It would have felt wrong to leave them,” says Jack. “So we re-recorded a lot of them. And also the songs had developed a lot because we’d played them live so much. A lot of the early recordings are lo-fi bedroom recordings, not like our live sound. When we made the record we wanted to capture both sides.”

And it’s good to see a long version of their storming live-set closer ‘Gnarbone’ has been included. Although Jack explains that there are a few variations of the track knocking about.

“We had one version which was just how we do it live, but when it came to final mixes and looking at the length, it wouldn’t all fit on a 12” record, so we had to trim it down a bit. The song live depends on how long our set is, and there are bits we can add and take out. But that was one we really wanted to have a live sound to it.”

Jack also explains that he might have had some supernatural assistance on the guitar overdubs.

“When we recorded it, I hit the last chord and there was this wall of feedback, which sounded amazing in my headphones, going in and out of phase. And then I felt something squeeze my arm. It was a really weird sensation… basically a ghost. Telling me to shut the fuck up. So that’s where we cut the track off.”

“I sat down at the computer and looked at the clock and it was exactly midnight. Then I listened to the take and you can hear this weird noise. Like a malfunction in the digital realm. You can hear it on the album.”

The cover of the album, ‘Until The Tide Creeps In’, features Jack and Lily’s dad, Michael.

“That photo was taken the week our mum and dad met,” says Lily. “We named the band after our mum, so it seemed right to have the album cover as our dad.”

Thanks Lily. That explanation saved us from having to ask the most boring question in music journalism, so we decide to quit while we’re ahead and head down to The Level for an impromptu photoshoot. The drummer, another Jack, joins us. He’s been over at The County Ground, rigging up Elton John’s gear. There are no Club biscuits left for him. He is visibly devastated.

With the LP straining at the leash, the next leg of Penelope Isles’s incredible journey is about to start. We hope they savour every moment.

The debut album, ‘Until The Tide Creeps In’, is released on 12th July 2019 (9th July digitally), on Bella Union Records. They play The Haunt on Wednesday 11th December.

A magazine journalist and former BBC minion, Gaz's words can be found in publications ranging from The Radio Times Guide To Films to 1001 Songs You Must Hear Before You Die, as well as on his blog The Wine Ninjas . He plays drums in a psych band, and once fell into a frozen lake in Transylvania.
← PREVIOUS POST
'Moving Still' Photo Exhibition
NEXT POST →
Stereolab Review