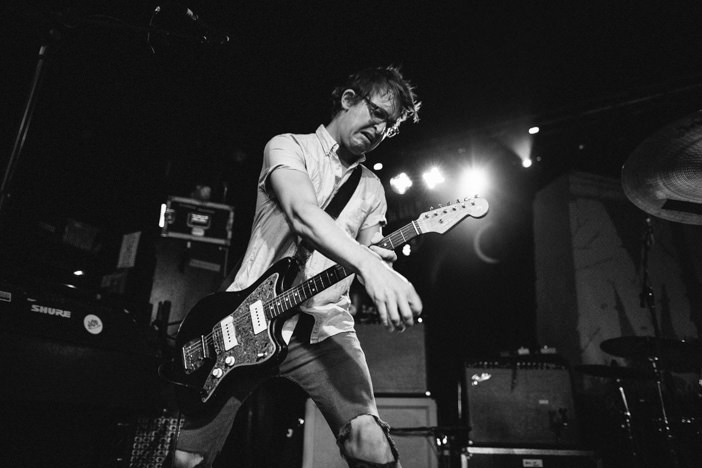 Having played a blinder of a set at Audio earlier in the year the simple fact is that Metz should be a lot larger than they are – but let’s be thankful they aren’t just yet. They seem focused on playing hard and giving the audience a show rather than just going through the motions.

‘Get Off’, ‘Headache’ and ‘Sad Pricks’ are all smashed through with real aplomb. Alex Edkins is captivating to watch and the trio show how tight a smaller set of musicians really can be.

Mudhoney are a band that this SOURCE writer loved along with other grunge luminaries like Sonic Youth, Tad and Nirvana. Teenage angst doesn’t last forever and tonight it feels a bit like watching four dads playing in a garage band. Hard to imagine a time when they toured with Nirvana but we have to remember that Kurt would also be an old dad by now.

They go through their back catalogue with conviction but it often feels quite sterile. To give them full credit the set is peppered with great songs like ‘Chardonnay’, ‘The Only Son Of The Widow Of Nain’ and ‘No One Has’. ‘Good Enough’ from their 1991 album ‘Every Good Boy Deserves Fudge’ is a particular highlight.

Lesson learned for Mudhoney – don’t have a support band that echo the energy and passion you lost 20 years ago.

Dan is founder of Brighton based web agency Built by Buffalo who made the SOURCE site. After attending many gigs he decided to start documenting them with photos and reviews. When not nerding off about something or other he spends his time taking pictures, wrangling his cats and travelling with his girlfriend.
← PREVIOUS POST
Inca Babies Review
NEXT POST →
Brighton Fringe Reviews - Part 3
Mailing List
Recent Posts
Website developed in Brighton by Infobo
Copyright © Brighton Source 2009-2020
Mudhoney & Metz Review - Brighton Source