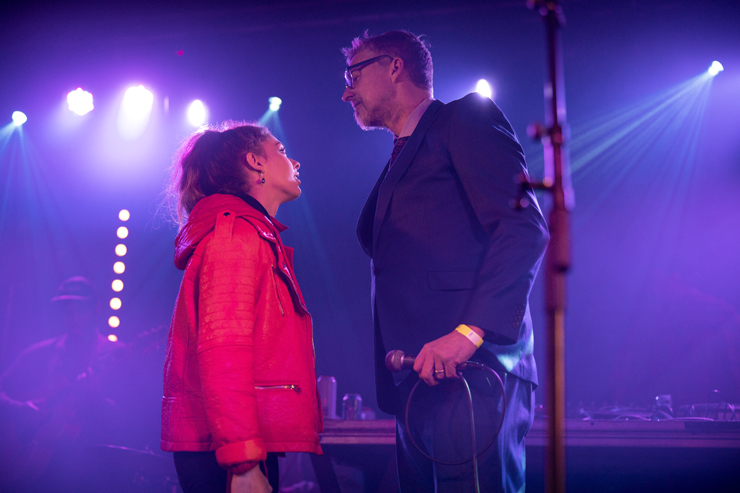 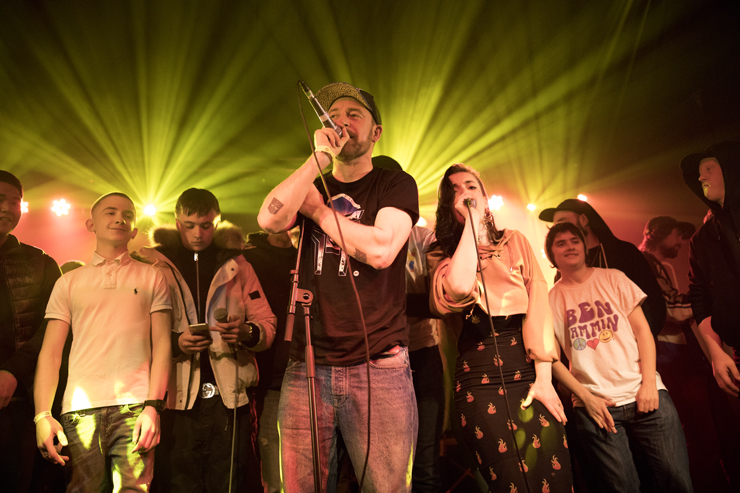 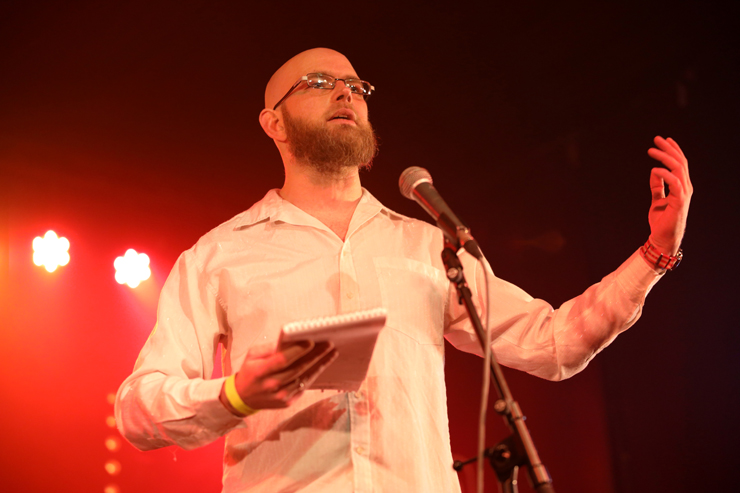 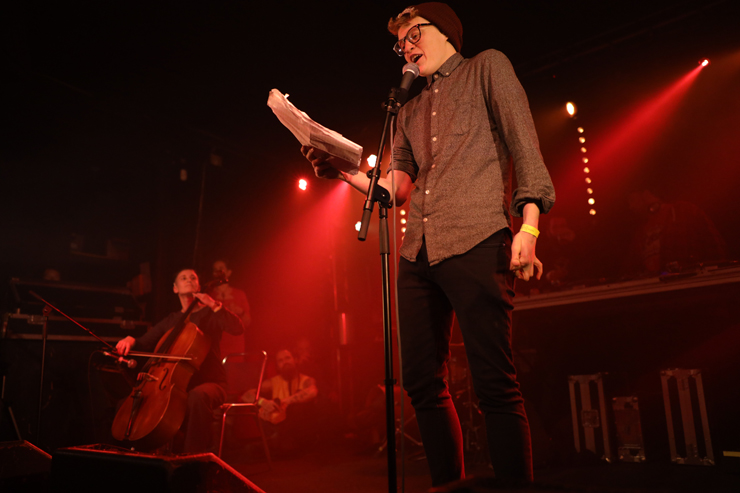 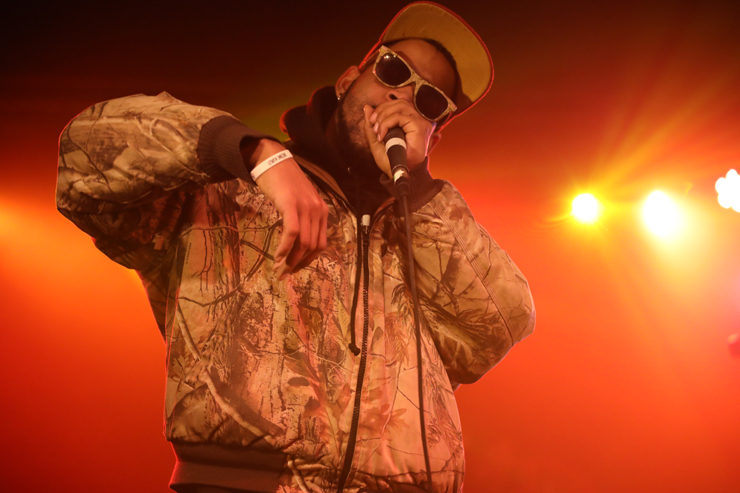 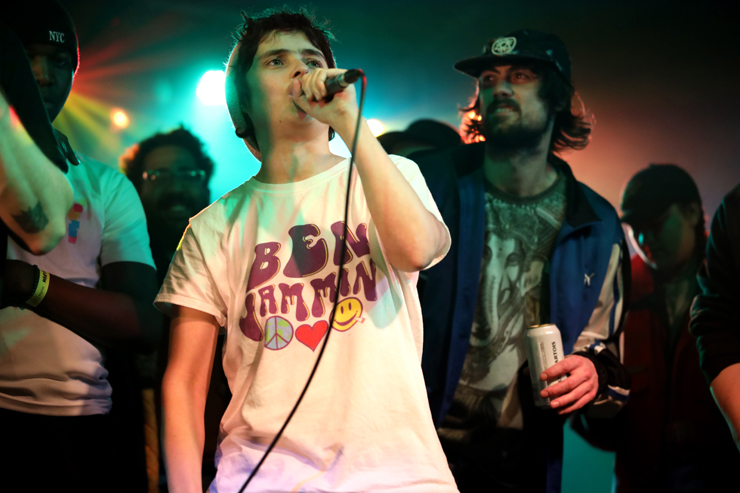 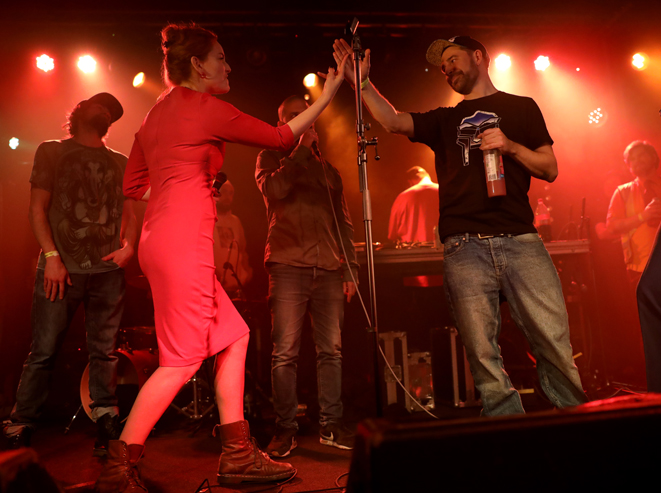 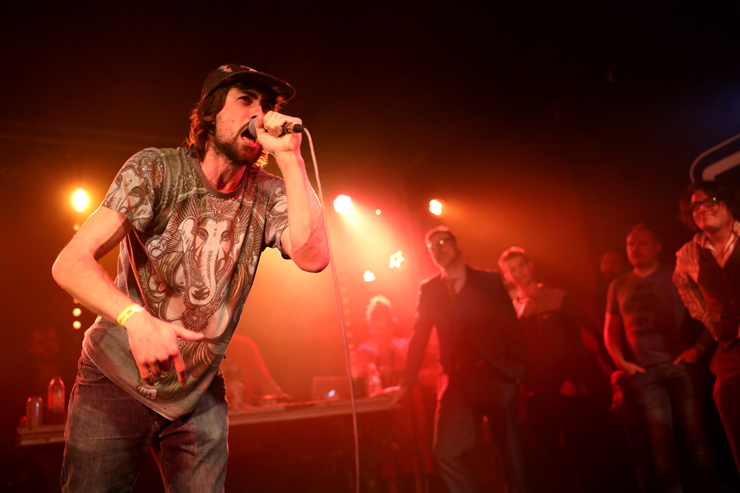 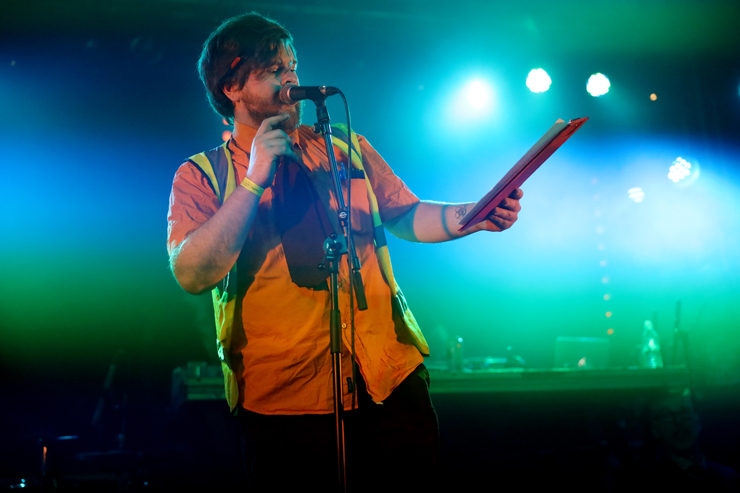 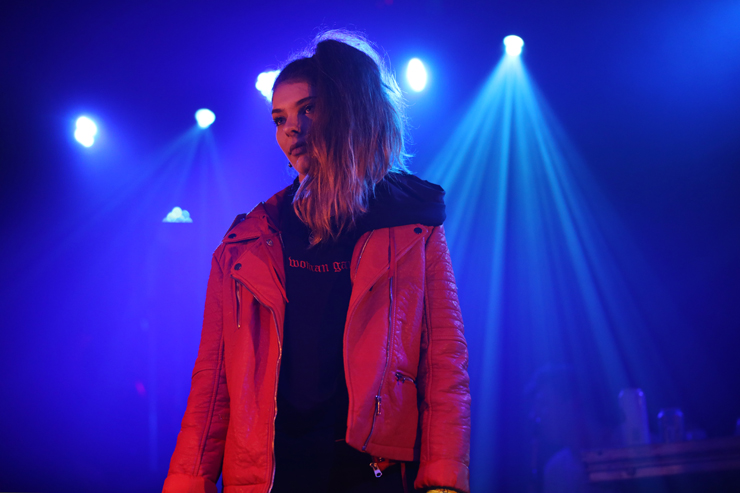 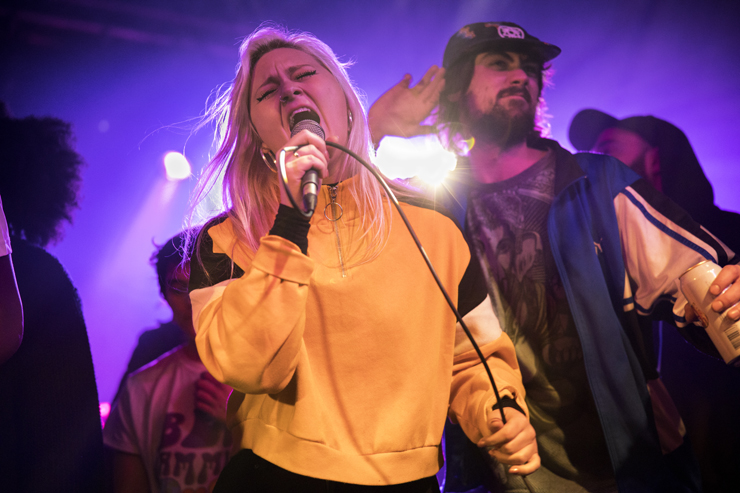 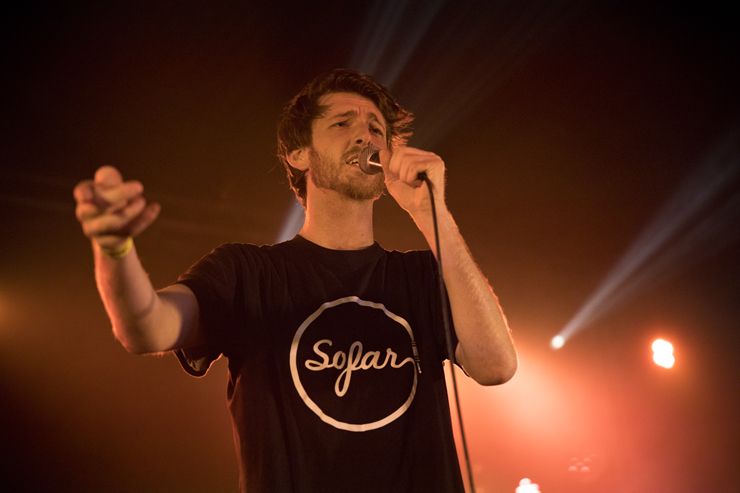 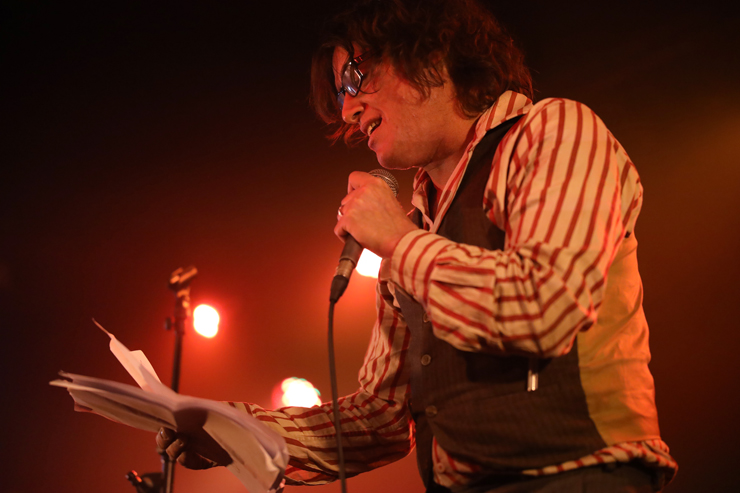 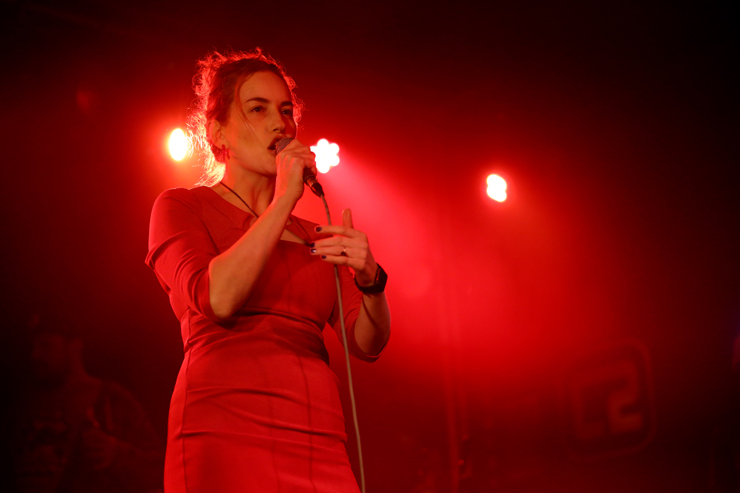 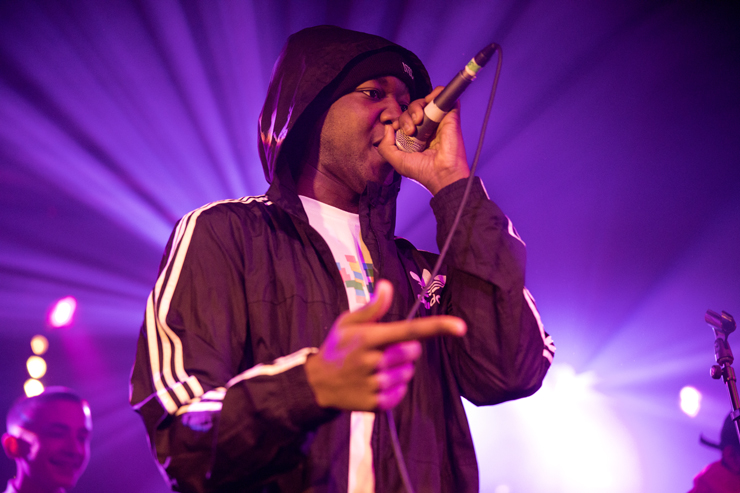 In 2002 a rapper called Tom Hines gatecrashed a poetry night, grabbed the mic and started taking the piss out of the performers. That impromptu outburst triggered a feud between Brighton’s poets and rappers which has been played out in front of bigger and bigger crowds for a decade and a half. Over the years Poets Vs MCs has become a local institution, a thoroughly entertaining annual fixture and a breeding ground for some brilliant lyrical talent. Tonight they killed it off.

Suitably enough the night begins with a battle over the merits of the event itself, with Felman decrying the ‘pantomimity’ of the whole thing while poet captain Mike Parker gamely tries to mount a defence. Felman’s point is both undermined and underlined when Mike reveals that he’d actually told the MC to write this very piece. It’s a funny moment, the conceptual equivalent of shouting “he’s behind you!”

In a similar vein, Robin Lawley and Spliff Richard jostle over their respective memories of previous bouts (“that’s not how I remember it”) as if the legacy of the whole event was in dispute. Robin’s comical pedantry provides a good foil for his opponent’s high-octane wordplay, especially when the pedant’s mantle is passed back to Spliff when he’s called out for using a stopclock to time other people’s performances. Not the sort of thing you’d expect from a rapper with a name like that.

In a pre-battle interview with SOURCE the team captains spoke of their efforts to maintain a sense of risk. Thus much of the first half takes the form of various wordy challenges – like a literate version of the things they make people do on incarceration-themed reality shows. We hear rappers performing sonnets and poets forced to freestyle; teenage poets who used to be MCs reciting love poems and poetic rappers forbidden to use rhymes (rapper captain Jon Clark says this was weirdly difficult, though he makes it sound easy). It’s impressive stuff, and pretty tricksy, but the technical aspects of the challenges rarely overshadow the subject matter. Part of what makes this event so memorable is the fact there’s space enough for these pieces to be heartfelt and personal as well as irreverent and comedic.

Mike Parker returns in his alter-ego as Sir St. John-Scarpia (“poet, punk and next leader of the Conservative party”) to take on the 19-year-old rapper Boudicca in a political war of words. Their performances are partly written and partly improvised and both pull it off with aplomb, but it’s no surprise that the audience backs the young activist over the gloating Tory. Likewise, when Boudicca comes back for a rapper/poet duet set to music it seems the odds are stacked in her favour. AP Staunton is essentially a storyteller, so it’s little wonder he can’t keep up with his opponent’s free-flowing barrage. Besides, who can really follow what two people are saying when they’re speaking over each other?

Despite the fact he helped start this ruckus, Tom Hines seems happy to take a backseat as a co-host with poetry mainstay Rosy Carrick. However, a hip hop cipher at halftime gives us a chance to see Hines in action, and he’s as irrepressible and energetic as ever. The stage is crowded with the youngsters he’s coached at AudioActive, who take turns to spit bars with veterans of previous battles like Influx and others. We don’t know if it contravenes the hip hop code of conduct, but some of the singing that goes down here is excellent.

The second half sees the battle begin in earnest. Ben Jammin and Dave Peroni launch direct attacks on the poets, singling out individuals on the team with a few well-turned surgical strikes. Mostly they find their target, but a couple of the putdowns are so blunt they come across almost like playground taunts (“…and you smell”). Joe Bunn retaliates with a ‘work assessment’ of the rappers’ poor performance record, complete with hi-vis jacket and clipboard. It’s more a character comedy skit than a poetry piece, but it’s deftly handled and pretty funny.

Former poet champ Tommy Sissons makes a surprise appearance alongside Edinburgh’s Ironmaster to continue the MCs’ onslaught. Their slick back-and-forth exchange hits a sweet spot that allows them to show off their chops while having a good pop at the other team. So the poets are on the backfoot when Daniel Searle comes to the rescue with a story about Jon Clark who apparently interrupted a poetry meeting in a pub to scoop up a forgotten pie which had fallen facedown on the floor. A daft tale, but priceless in the telling.

Jon gets his revenge a little later after inviting his disguised Sombras rap partner onto the stage. In previous years we’ve seen this duo perform in masks so it seems we’re in store for something theatrical. However, the identity of the woman behind the mask takes everyone by surprise. It’s Sarah Parker, wife of poetry captain Mike, with a poem of her own and an axe to grind. She hits back at her role as the “good little wife” who keeps the household going while hubby flounces around at poetry shows, and reveals that Mike once dismissed her suggestion of performing with the warning: “but only if it’s good enough”. This becomes a motif of a piece that’s clearly up to scratch. The audience loves it, and Mike is bent double with laughter even as Sarah twists the knife. The poem ends with a conciliatory kiss, but it also feels like the MCs have landed a fatal blow.

Chris Parkinson, earlier denigrated as a hairy weirdo with a habit of accidentally tearing down stage curtains, goes rogue with a whimsical rant about wanting to kill off the whole event, exhibiting an amusingly crooked desire to end it once and for all. Amid the confusion the MCs drive home their advantage with another surprise, bringing on freestyler Gramski, who told us he was quitting the battle in 2017. Gramski takes audience suggestions to tell the life story of a fictional woman whose defining character trait is her fear of buckets. Despite the unpromising premise (“Buckets? Really? Okay!”), he manages to shoehorn in a few profound moments via some skilful improvisation.

Pete Strong leads the poets’ final sortie with a piece about how words can achieve more when they aren’t tied down to a musical beat, yet the point of the poem is kind of contradicted when the music kicks in and a choir starts up a chant of “Freedom!” It’s always nice to end the night with a song, but as Tom Hines says: “When we had music in the cipher it was raw and real – that was just creepy and religious.”

When our hosts ask us for the final verdict the cheers are tremendous, but the MCs take it. Though the result must be refreshing for the hip hop heads in the crowd (traditionally the poets have tended to win out), it probably doesn’t mean as much as it would have done back in 2002. Both teams have competed on each other’s turf tonight, and it wasn’t always clear who some people were supposed to be gunning for. Over the years these performers have swapped sides, and even skills, to the extent that the lines are now blurred, or possibly erased. It’s a shame that such a spectacle of talent should end, but maybe the quest is complete. Is rap better than poetry? Or is poetry better than rap? The audience looked from rapper to poet, and from poet to rapper, but already it was impossible to say which was which.

Ben Bailey is the editor of Brighton Source and a freelance writer. He also plays in a few bands and can sometimes be found giving talks on a variety of niche topics. He lives in Brighton and rather likes it.
← PREVIOUS POST
Babybird, Fri 1st March
NEXT POST →
Dog of Man, Wed 27th Feb
Mailing List
Recent Posts
Website developed in Brighton by Infobo
Copyright © Brighton Source 2009-2020
Poets Vs MCs 2019 Review - Brighton Source