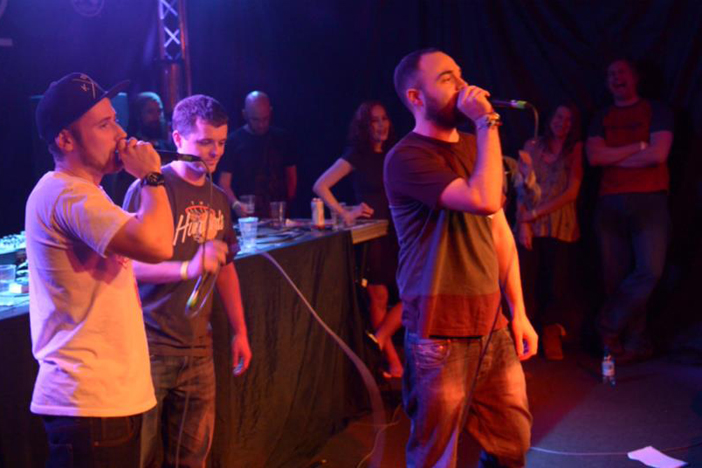 Poets vs MCs was back for the tenth instalment, and this time it was plucked from its dark, central home in the depths of Komedia and dropped all the way down Madeira Drive in Concorde2. Though Poets vs MCs traditionally enjoys a huge audience, this was a risk: it’s a long walk on a chilly night, and there’s something achingly cold about a half-empty Concorde. Luckily there was no need for concern as the night was comfortably full, surprisingly warm and safely maintained its unique charm. As an annual event, this is one of the few highlights of January. The tickets remained a post-Christmas-friendly £3 for over three hours of enthusiastic and carefully prepared entertainment.

For those unfortunate enough to have missed it, the premise is this: first, eight representatives from each camp showcase their skills with a performance. Next, a twenty minute hip-hop freestyle cipher is held; an interval of sorts. And for the final section, the battle commences.

If you’re familiar with the Brighton hip-hop or poetry scene, you’ll have recognised most of the participants from other events. It was hosted by Rosy Carrick and Adam ‘the Rapper’ Kammerling, both of whom are brilliantly talented at engaging the crowd as well as devising thought-provoking performances. All the poets were familiar faces, including Chris Parkinson, whose passionate, irreverent poem about politics drew from a myriad of pop culture references to great applause.

Performance poet Spliff Richard has a vast following for his rapid-fire delivery, and gained even more fans during the night. On the rap side, Big Dave’s thoughtful and self-deprecating piece about mental health showed a depth to the genre, and Mrisi’s sharp delivery of verse showed that there’s a fresh generation of rappers ready to take the helm. Throughout the show there wasn’t a weak performance, and a great variety in style and delivery across both teams. Despite the MCs claiming to be on home turf 2013 gave another overwhelming win to the poets, but with the vocalised concession that rap is a form of poetry anyway, no-one seemed too upset.

At this year’s event, the borders of poetry, rap, MCing and spoken word were even harder to define than normal. Some of the MCs performed satirical poems; each team made good use of their opponents’ stereotype; and the host for the MCs confirmed that he’s been booked for the spoken word tent at Latitude. There’s discussion of the common roots of performance, of the similarities between the scenes and the teasing is never particularly personal. Poets vs MCs is born from two popular monthly Brighton nights, SlipJam:B at The Hope and Hammer & Tongue at Komedia, and despite what they might try to imply, these supposedly polar opposites are friends, supporters, collaborators and in one case at least, lovers. This was the tenth year of Poets vs MCs and what might have started as a battle has definitely evolved into friendly fire. Heart-warming, impressive, brilliant to behold, friendly fire.