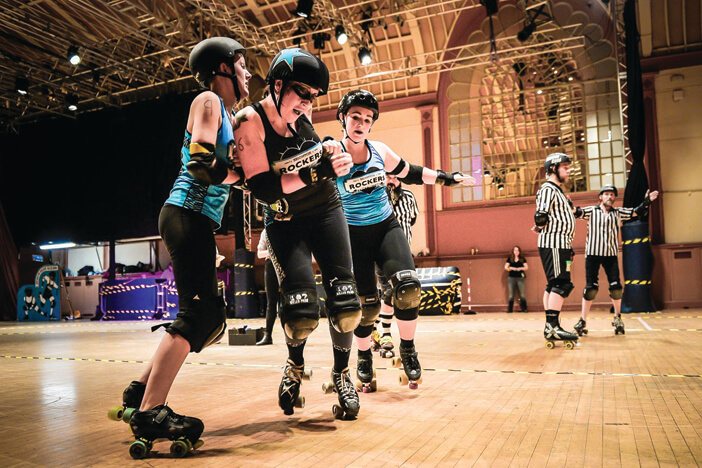 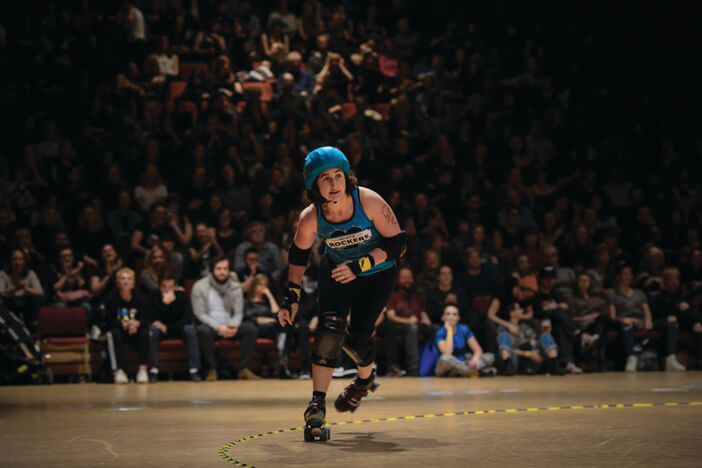 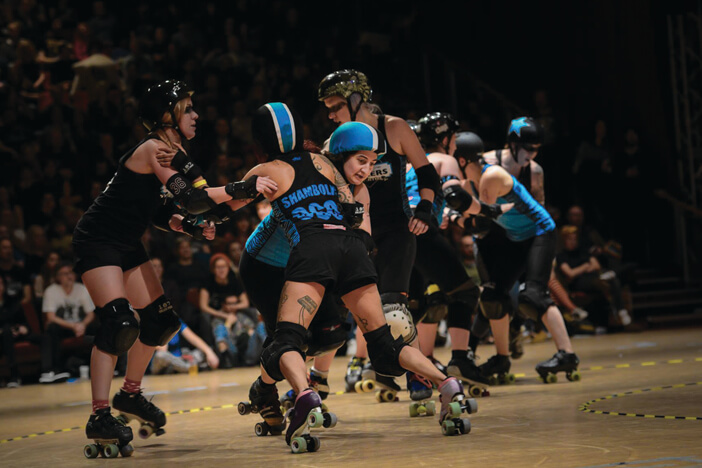 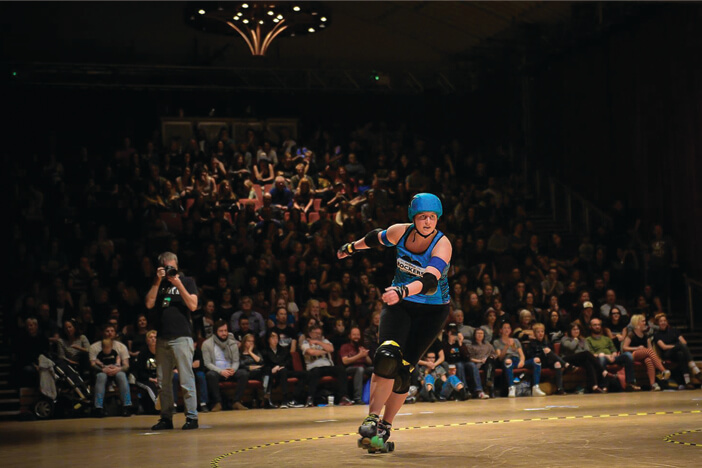 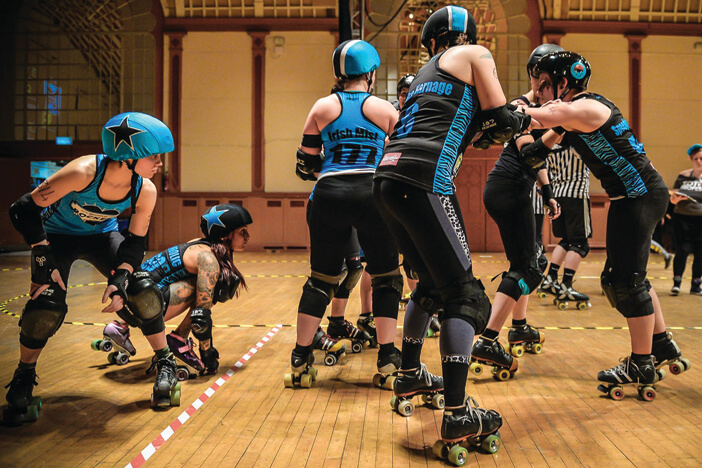 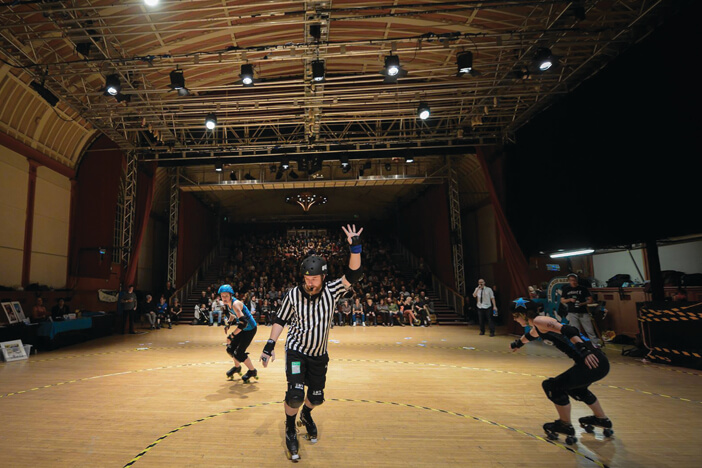 2016 is probably quite the year for Christmas wishes. Whether it’s a desire for financial escape from austerity life; a yearning to see one of the year’s copious celebrity deaths reincarnated; or the overturning of some vote or other. For the women of the Brighton Rockers roller derby league, every Christmas, New Year and birthday of their seven-year existence has provoked the same wish. Finally, in what is elsewhere the bleakest of years, that dream has come true – the Rockers are playing roller derby in Brighton! 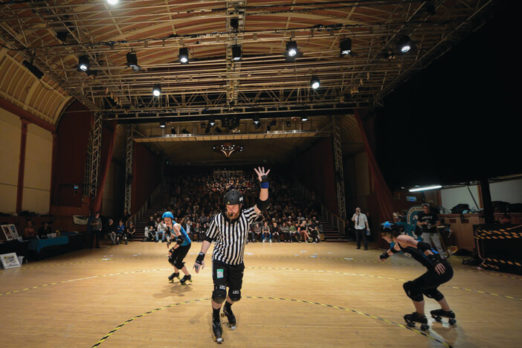 After two dozen events in a draughty Shoreham warehouse and an anodyne Haywards Heath leisure centre, the novelty of spinning their quad skate wheels around the floor of the Corn Exchange comes with many exciting firsts. “Actual real tickets!” screams one A-team skater, excitedly waving one around, long since accustomed to scrawled door lists of PayPal buyers. The league’s photographer gazes up in wonder at the professional stage lighting rig above the track, casting his filters designed for sports hall amber aside.

The excitement of announcers Phil and Charlie (the latter accessorising with a baby-stuffed sling) is particularly infectious. Weaned on battling through Fisher Price PAs in echoey hangars, they clearly relish the high end gig-standard equipment and mixing available here, cheering the capacity crowd to their feet for a series of Mexican waves. The main job of the mic wielders is explaining this most confusing of sports to first time spectators. Essentially, two teams skate around an oval track. One member of each team – the ‘jammer’ – wears a star on their helmet. They score a point for each opponent they pass. Everyone else gets in or out of their way whilst knocking people over. Basically. 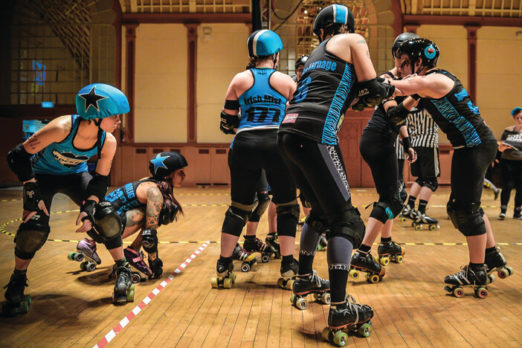 The size and dimensions of this venue wouldn’t accommodate a regulation track, so instead of facing glamorous travelling opposition as they usually do (the likes of Brussels, Milan or Vienna) today’s event pits one half of the Brighton squad against the other, with a few other rules tweaks to boot. This modified ‘diddy derby’ format proves a hit with the crowd in a first half where Teams Blue and Black field B-team players. Farmergeddon (the star graduate of the Rockers’ 2016 new skater intake) and debutant Grenade O’Connor are amongst the players rolling Black into a 126-89 half time lead. The game has been much closer than the scoreline might suggest, with many lead changes already and more to come.

During the interval we get talking to an older couple. Having seen a game many years ago while on holiday in Orlando, they were first in the ticket queue when they heard about today’s event. “This is the perfect sport for Brighton,” they contend. It is indeed hard to think of a better home for as punky and playful a pastime as this. 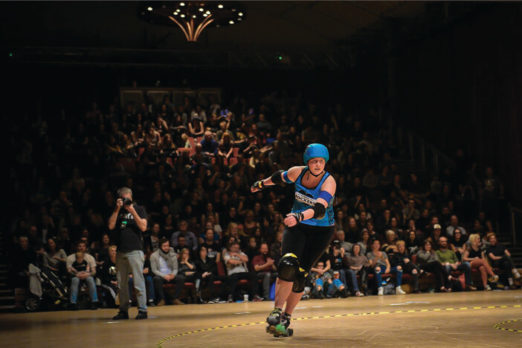 While the first half has seen a couple of messy moments, rules and tactical errors that only experience can conquer, the second period will see Brighton’s well versed A-team AllStars taking over on track. Once ranked #5 in the UK, the AllStars still place amongst the top 10% of British women’s teams. The pace of the game and the hardness of the hits – hip checks, shoulder charges and more – visibly increase in this second half.

The floor seating by the track (dubbed ‘suicide seats’ due to the likelihood of a skater flying into your lap) is usually the most popular at derby, yet here it remains empty throughout the game. That’s a good indication of how new to the sport most of the crowd here are. As bewildering as they might be finding it, roller derby is as much about the spectacle as the specifics. It doesn’t take an understanding of the 79-page rulebook to appreciate that Hairy Fairy sending Team Black’s jammer flying into a pillar is something to applaud! 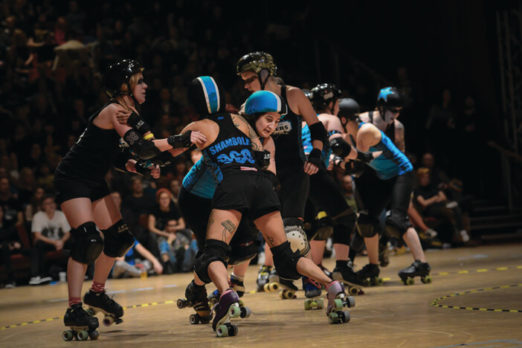 Despite starting the half with a 40-point disadvantage, the Blue team tie the game in the final seconds, before sneaking a 168-165 win. The crowd spill onto the track to glad-hand the skaters on their laps of honour. “That was great,” says the Boss Man from SOURCE, “but I didn’t have a clue what was going on. I suppose I’ll understand it when I read your report.” Probably not, Boss Man. You need to attend at least five games before this crazy wheeled conflict starts making any real sense. Roller derby is likely to return to the Corn Exchange after its refurbishment – this was the venue’s final event before a lengthy closure – but for now the yellowy light of Haywards Heath leisure centre beckons. The Rockers face Vienna there on March 4th. See you in the suicide seats. 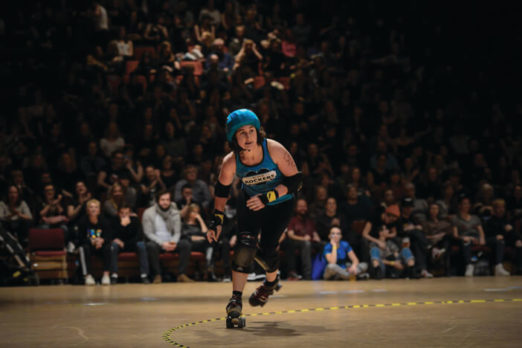