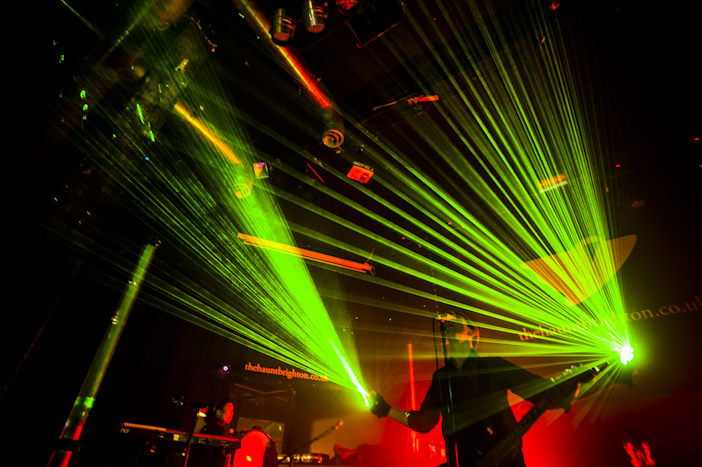 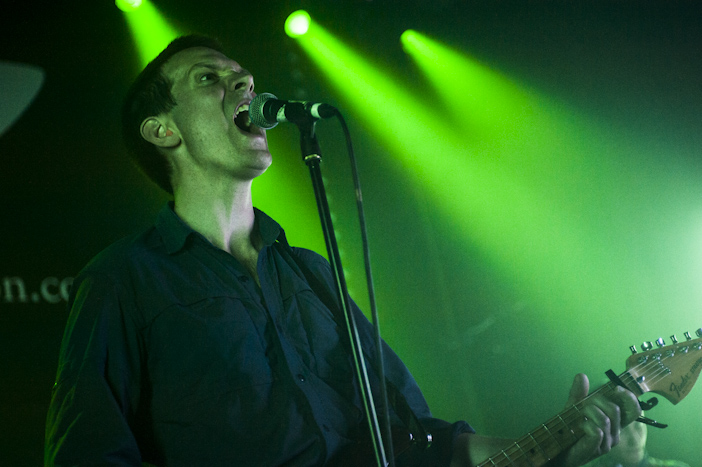 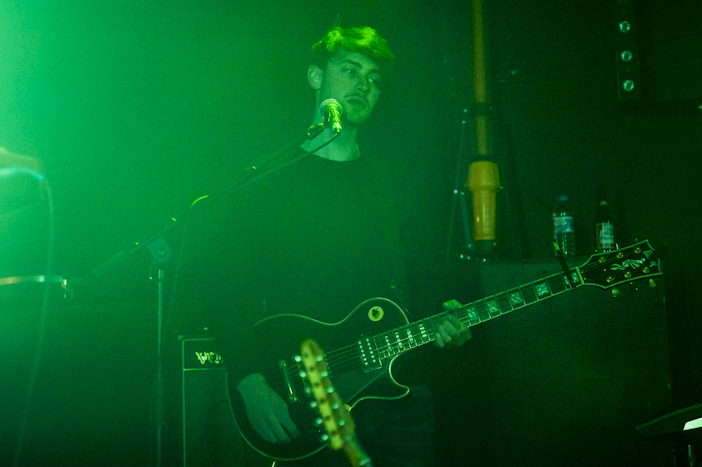 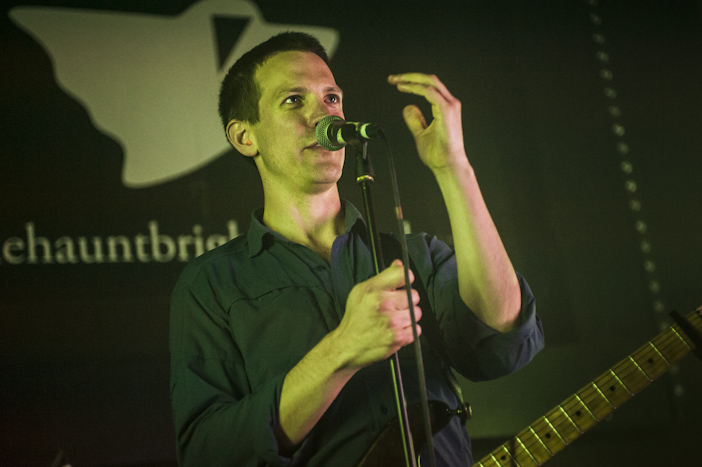 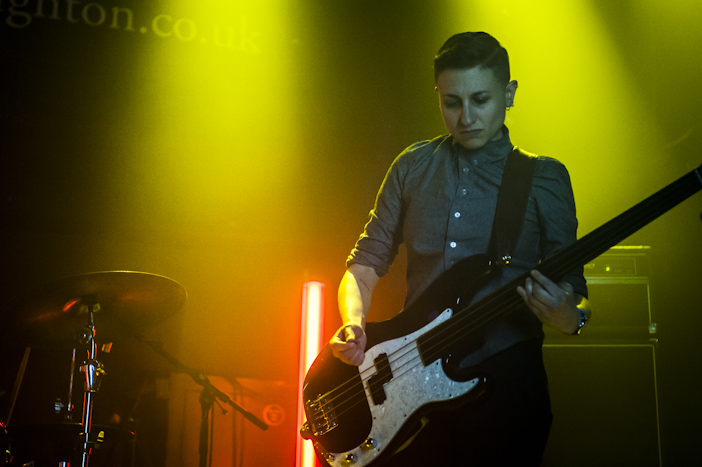 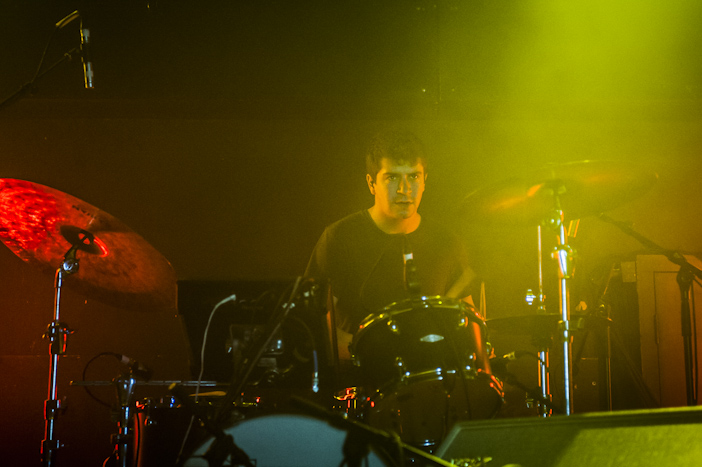 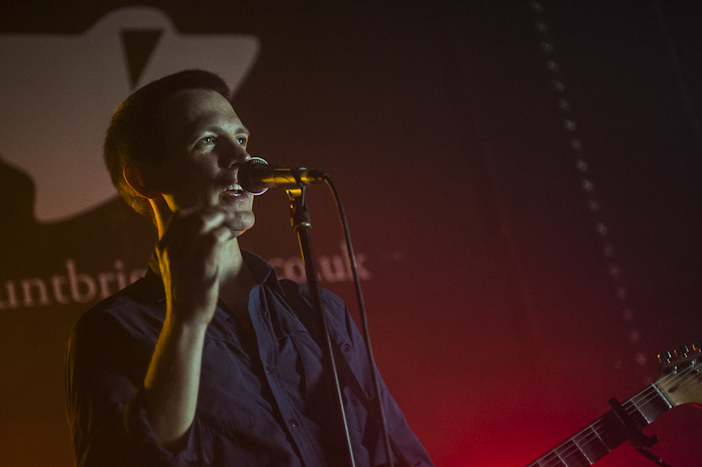 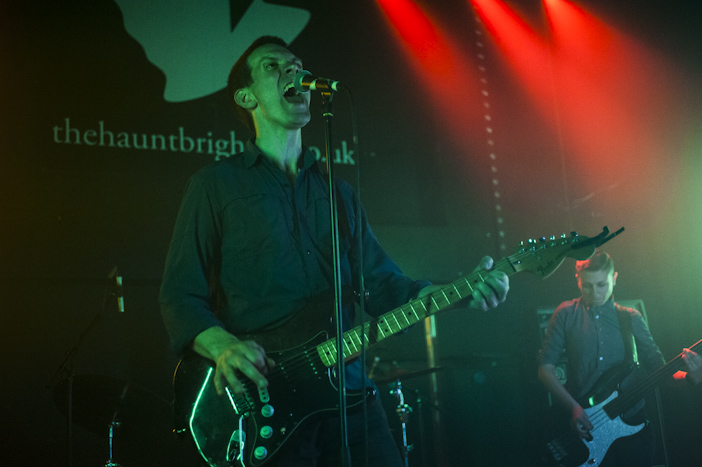 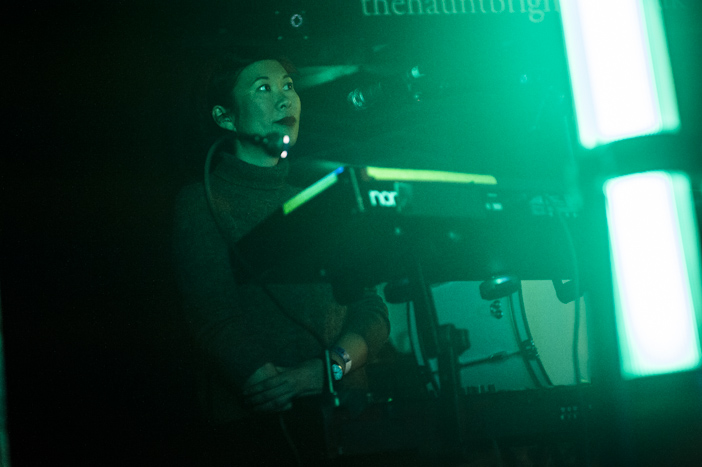 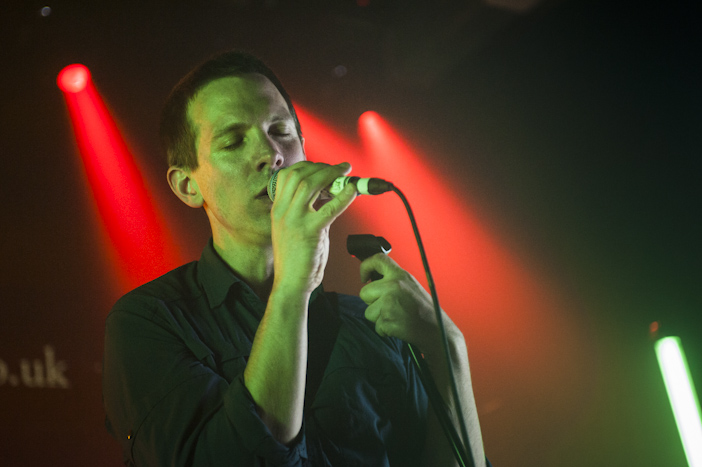 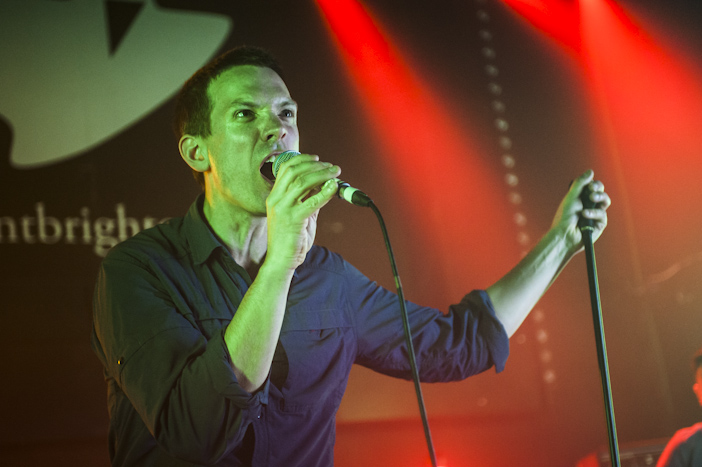 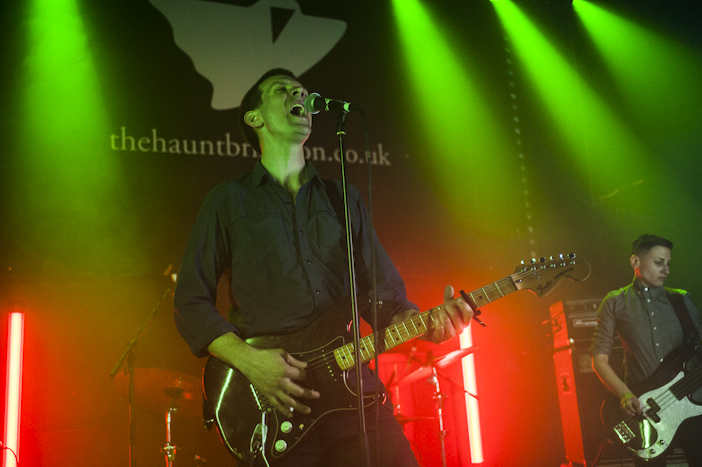 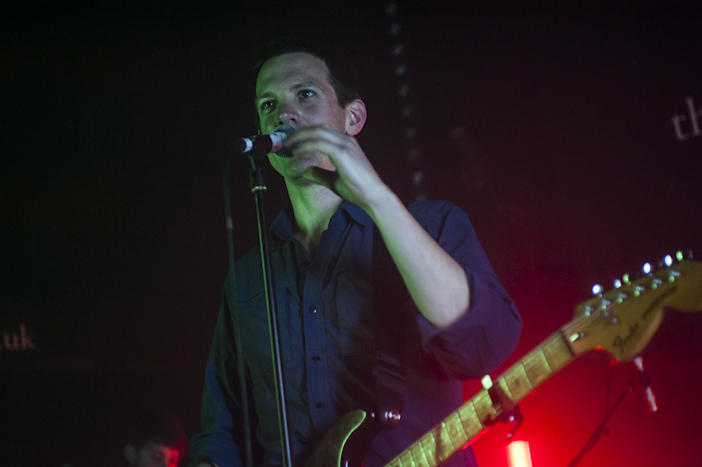 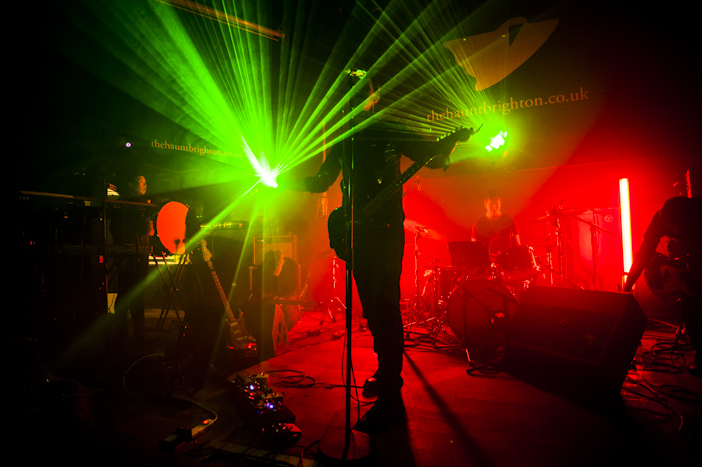 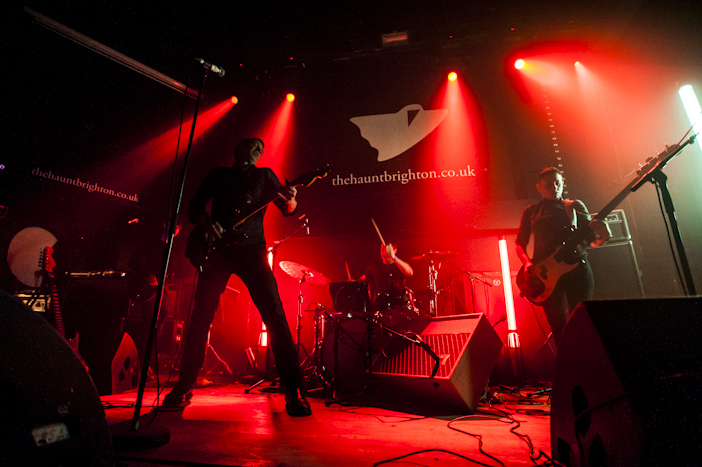 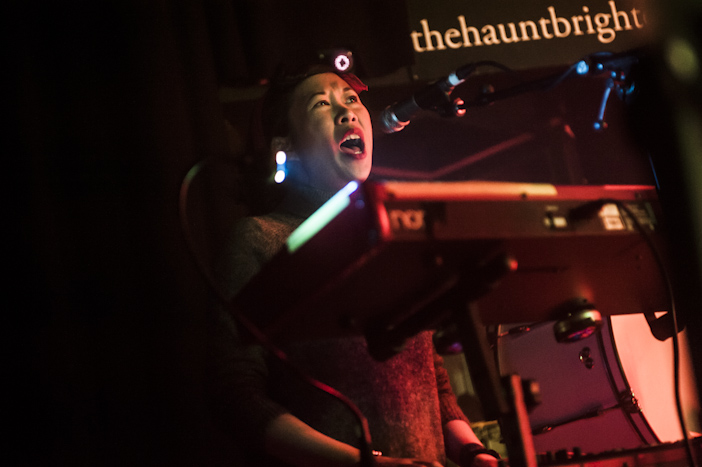 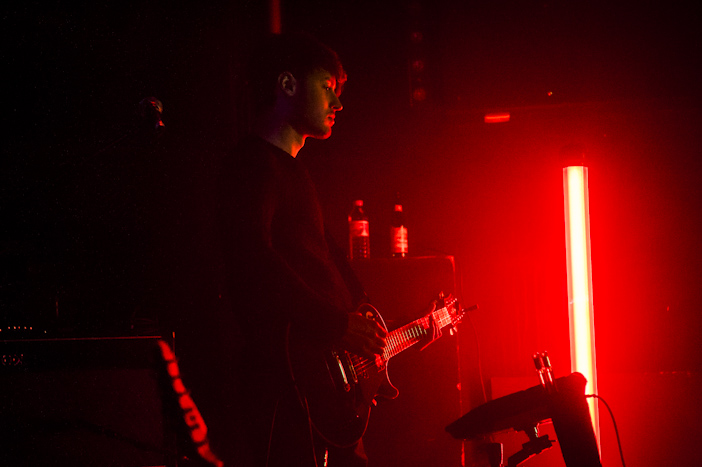 Spoiler alert! We heard rumours Shearwater were pulling out all the stops with a show including – we kid you not – gloves that beam light. We couldn’t miss this.

Wrapping up a three week stint in Europe, the indie rock band from Austin, Texas, were at The Haunt to promote their 2016 release ‘Jet Plane And Oxbow’.

Although their early stage action was fairly subdued, the banter between songs was tuned to an English audience; captivating, dry and witty. The stage was illuminated with vertical coloured strips that invariably changed colour with the mood of each song. It was evident that stage design was key to frontman Jonathan Meiburg by his quick refusal to dim the front strips for dazzled onlookers. It shouldn’t be surprising that his surrounding environment is important to him though, because unlike many other indie rockstars Meiburg’s also a naturalist.

On theme with what’s happening in their home territories, a song about the American presidential election campaign was announced, only to see Meiburg depart the stage in jest to the bellowing chants of “Trump! Trump! Trump! Trump!” We’re not sure if it was the gibes, or the very thought of Trump for President, but the next song talked of “the tiny voice in your head that tells you to kill yourself”.

With the music becoming more experimental and progressive, the overhead stage lights and installation strip lights were dimmed almost entirely to reveal what we had been anticipating. They ended with the stupendous ‘Stray Light At Clouds Hill’ in what truly was a climatic finale. Psychedelic laser gloves, and all.

Francesca Moore’s passion for the performing arts has seen her photographing live stage events for the past ten years; shooting at intimate venues and major stage events for a range of editorial clients, and with the production of limited edition fine art prints. Her personal work stems from interests in people and the environment, where she draws on her scientific background to portray humanitarian, social and environmental issues. She began contributing to the SOURCE after a permanent move from London around the time the magazine was dropped for an online only presence. She’s assured there’s no correlation.
← PREVIOUS POST
Brighton Flashmob Dies In NHS Crisis Stunt
NEXT POST →
The Qemists Photos
Mailing List
Recent Posts
Website developed in Brighton by Infobo
Copyright © Brighton Source 2009-2020
Shearwater - Brighton Source