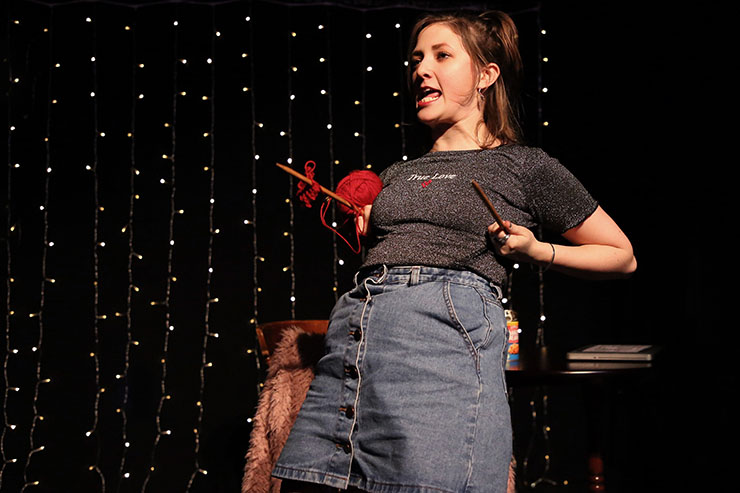 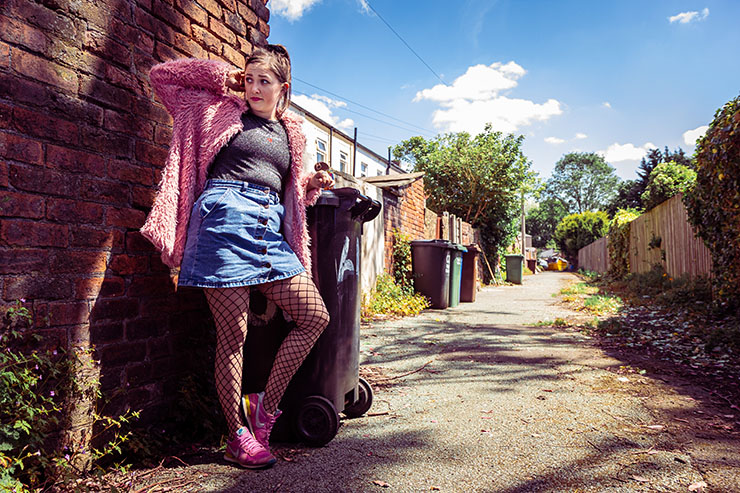 This is seriously funny one-woman stand-up.

Kate is stuck in an office job that is one step from the bottom. What is the password to get into the computer? Who knows? Who cares? What should Kate do? After all, she’s only a temp. Disembodied voices start offering a bonus coffee for successful staff.

She is wearing a denim skirt with a single button and a sparkling short-sleeved top. Pretty soon Kate starts fantasising about sex, about twosomes and threesomes, about Gary or – better still – Annie. From there, the plot takes us on a descent into acute observations of the beauty in the banal.

Kate feels a momentary frisson for the man in the Semi-Colon café. Then she sees an outrageous old bloke wearing socks with sandals! She remains in pedantic pursuit of a recycling bin that will accept the bottle she is carrying. Then there is the drunken night club, formulaic chat up, and exquisite dance sequence. In desperation she takes up arts and crafts and completes a row of stitches. Life is tough in outer London boroughs! The mime is superb.

The episodic nature of day-to-day life is revealed with fine attention to voice, body language, and movement. We see an extraordinary transition. This is stand-up where the script and performance combine to portray the anomie, inner despair and sense of fun in Kate’s stream of consciousness.

At that point, Kate gets called to an appointment with Dr Madeline Sneiden: “Please come along to the surgery”. Surely, it’s nothing? The tests can’t be positive. Can they?

A stand-up performer, of course, hovers in a paradoxical space. Their intimacy with the audience, can make us believe that their character is confiding what really happened. At the same time, we know that parts of it are fiction. This performance succeeded in holding that careful and delicious balance. But perhaps, on reflection, the Kate character might not have been cast as a struggling writer?

‘Skank’, written and performed by Clementine Bogg-Hargroves, is an impressive finely observed tumble through a crisis of identity and purpose. It portrays a descent from frivolity to seriousness and trauma.

The Warren venue does place sensitive and potent spoken-word theatre in venues where police and ambulance sirens from outside interrupt the act. At times, our heroine must pause mid-speech. Despite this, an audience of over 50 people smiled with her and the show went on. The raucous applause at the end drowned out the boy racers backfiring around Valley Gardens’ gyratory.

Zoey Barnes co-directed the show with George Roberts (sound design and technician) and Mark Ashmore (co-producer). If you missed ‘Skank’ do book a seat at the Chiswick Playhouse for late September.

Why not take your work mates along? But watch out. They might pick up some bad habits. Yes, it’s funny. And it’s deadly serious.

Mike lives in Brighton. This is a full time occupation. He's also a researcher, writer and activist. Any time left over he spends hanging around cafes and pubs listening to people on their phones. He loves theatre that pokes into difficult places. You won't find him on Facebook.
← PREVIOUS POST
Blue Orchids & Oldfield Youth Club, Sun 8th August
NEXT POST →
The Tempest Review
Mailing List
Recent Posts
Website developed in Brighton by Infobo
Copyright © Brighton Source 2009-2021
Skank Review - Brighton Source