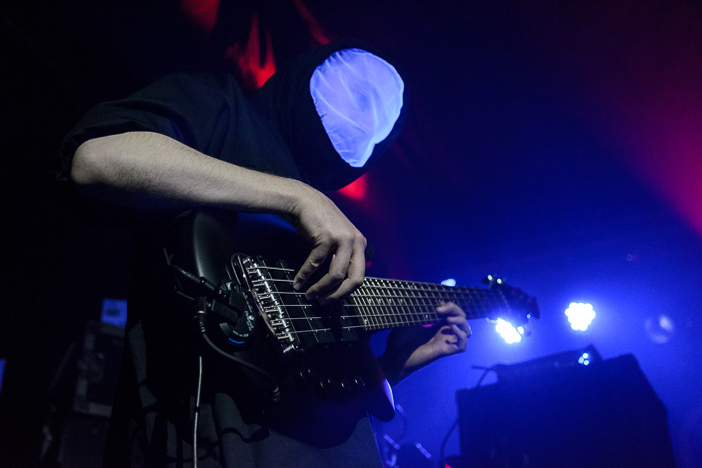 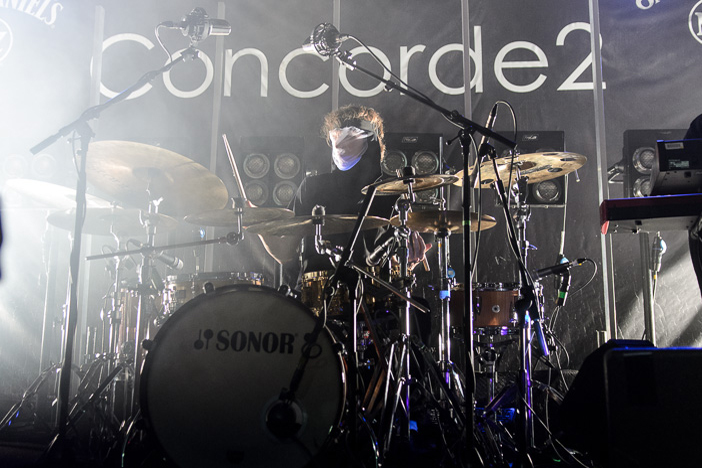 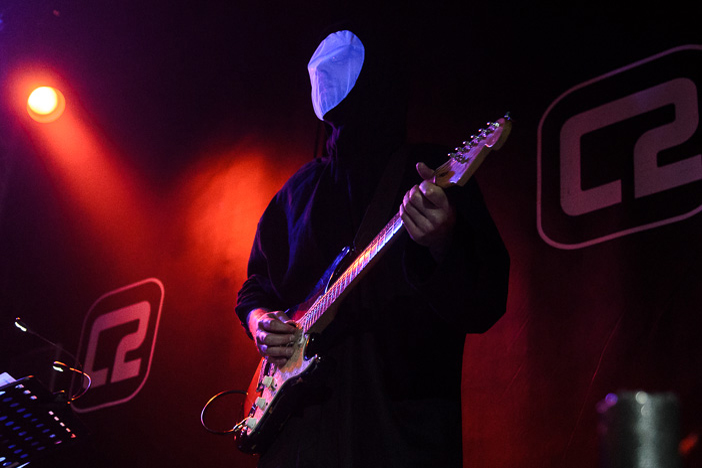 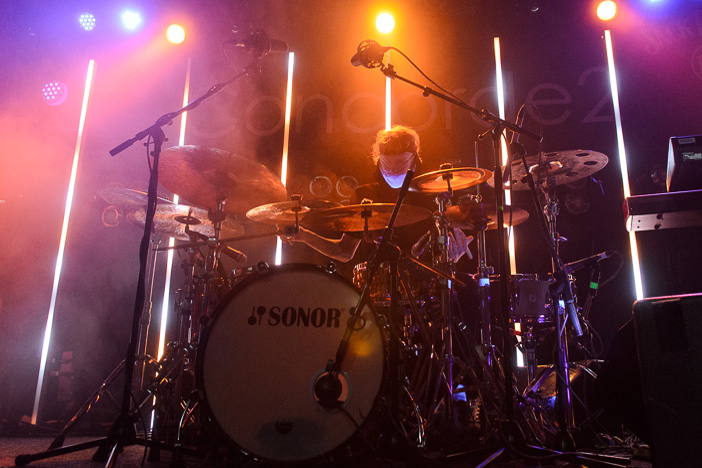 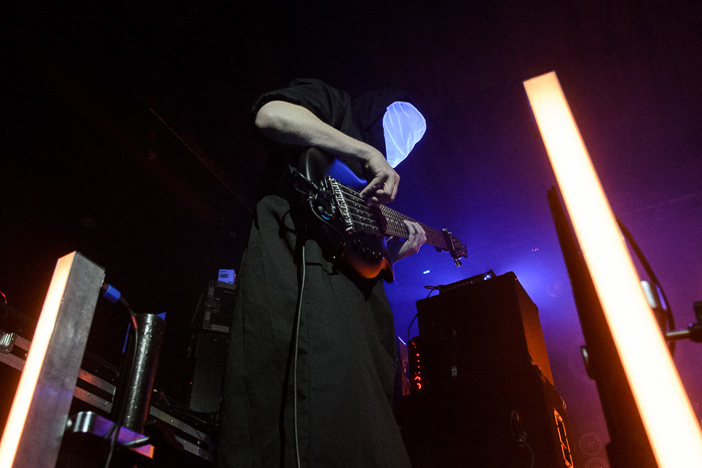 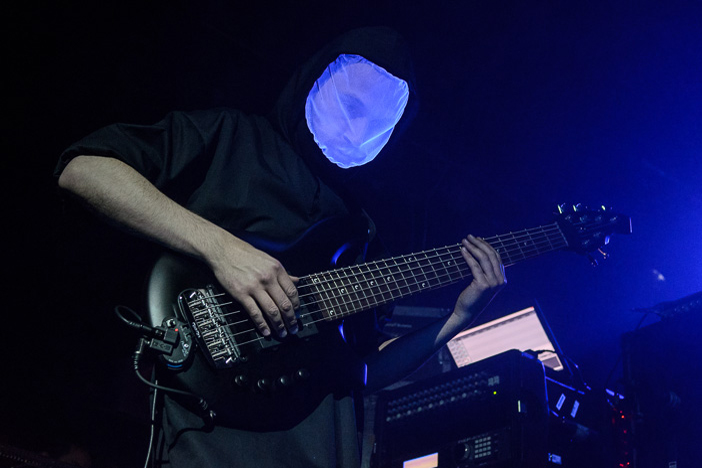 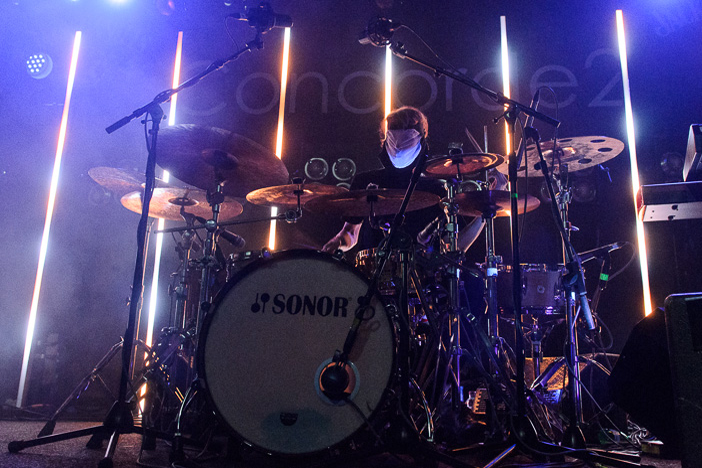 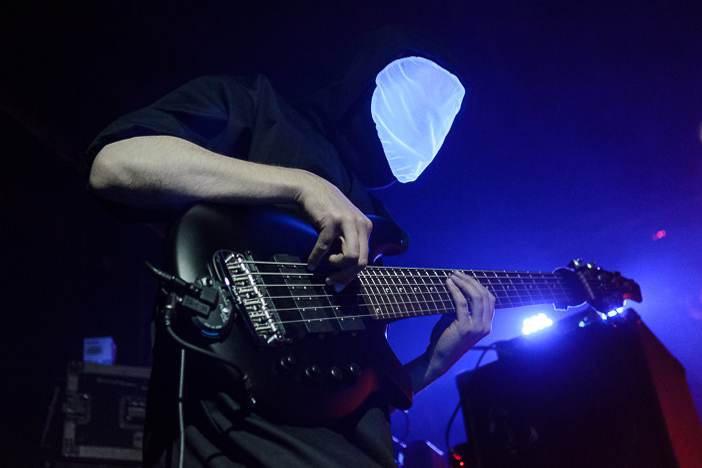 We’re curious to hear how Squarepusher’s distinctive heavy sound, fast paced audio production and frenetic bass will translate on a live stage. Shobaleader One, the band that everyone’s come to see but few have ever heard, are performing tracks released between 1995 and 1999. This era of Squarepusher music is known mainly for the seminal release ‘Feed Weird Things’ when he (i.e. Tom Jenkinson) was on Aphex Twin’s Rephlex label. So at the very least we expect the band will need an absolutely top notch drummer to keep the pace and complexity.

Before things get started Mount Bank gives a rather ambient support slot, bathed in blue light behind his mac. He plays a mellow selection, only occasionally dipping into more beat-heavy stuff. This sets the scene and suggests we’re in for a more relaxed evening as opposed to overwhelming bass, pace and rave music.

All the members of Shobaleader One walk on stage dressed in identical black gowns, hooded and with their faces covered in with shear white material. Squarepusher is stood left of stage under spotlights, leading his band on his six-string bass. He’s accompanied by a drummer, guitarist and keyboardist. The set does start off at a slower pace, with a distinctly jazzy and improvised feel, but more familiar tunes are met with cheers from the crowd. Lighting strips are lined along the front of the stage and similar strips behind the drummer throb with the bass and tempo of the songs, occasionally this dips into frantic strobe work.

As the pace builds up it truly shows off Squarepusher’s phenomenal bass playing skills; watching his fingers work over the strings is truly mesmerising. However as it really starts to peak it is suddenly over as it’s only a 45-minute set due to a late start and a 10pm curfew. The crowd is cheering for an encore but as the house lights come on they are left wanting more, but perhaps this was the intention all along.