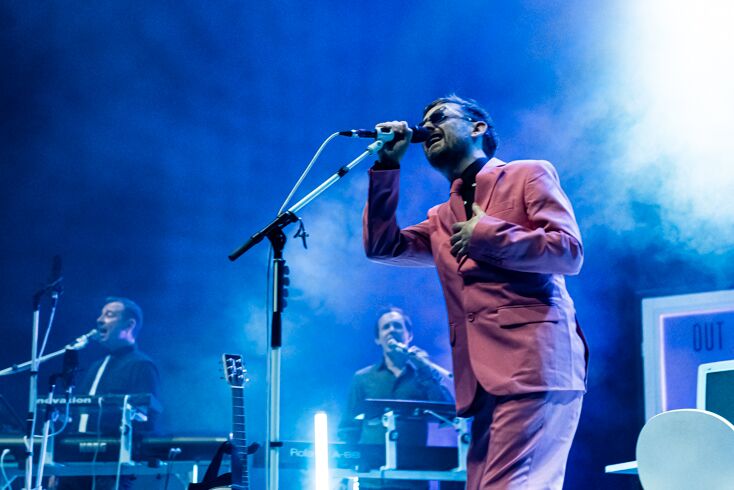 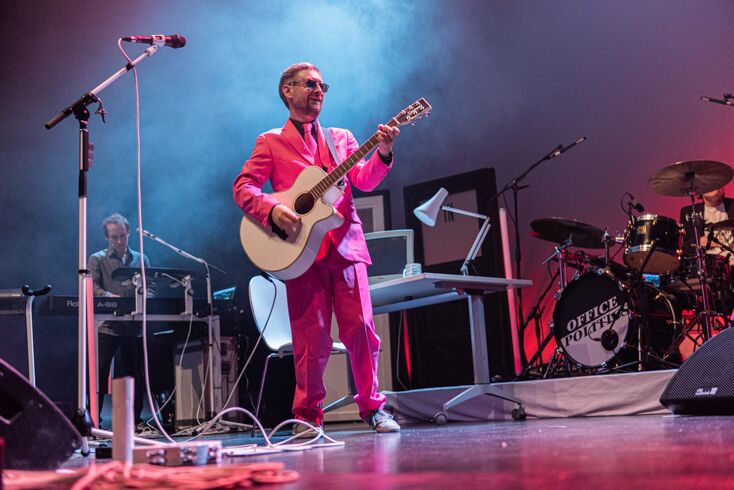 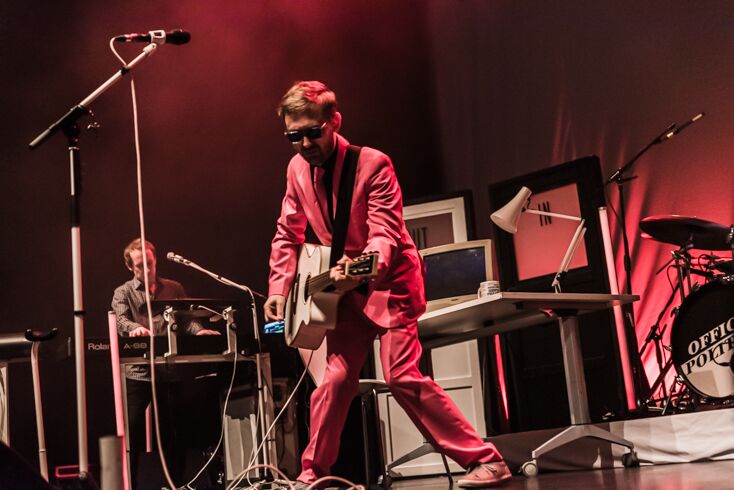 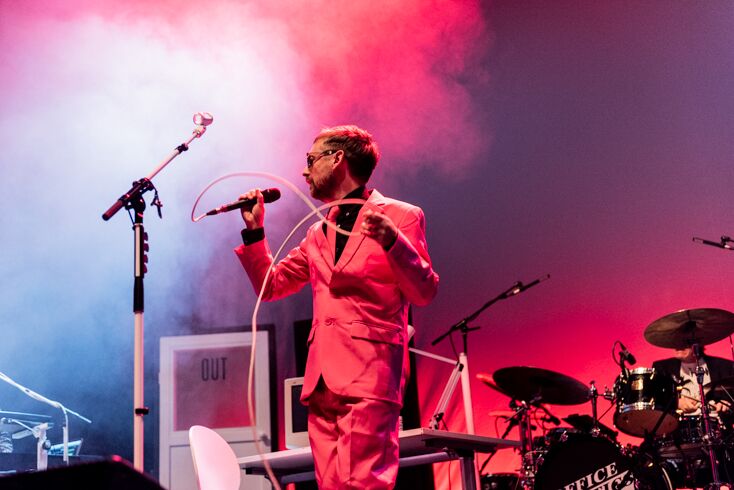 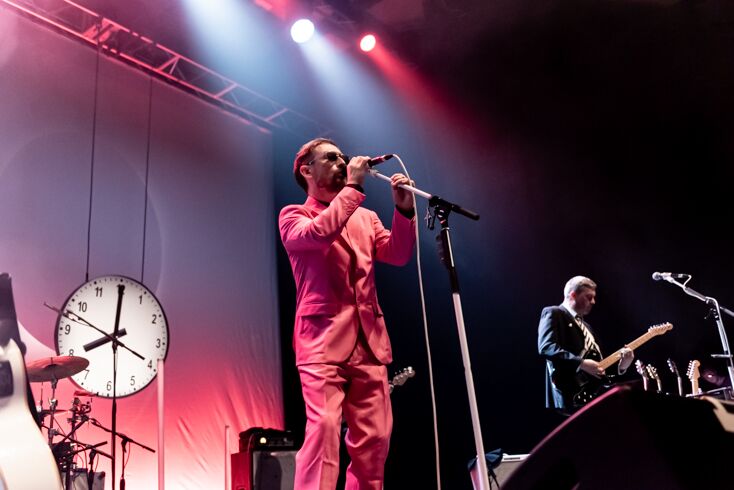 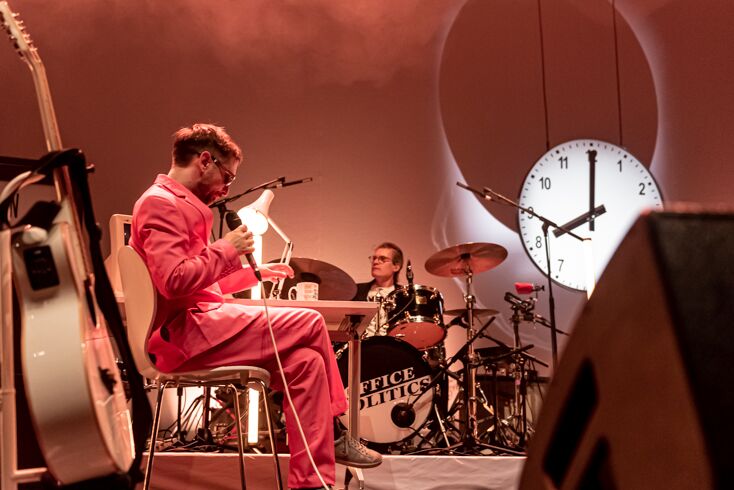 The last time we saw Neil Hannon he put in a fine solo innings at the old Komedia back in Winter 2010. Tonight, he was in more salubrious surroundings backed by a full band.

Warming things up were Man & The Echo, a four piece from Warrington who were last in Brighton earlier this year supporting She Drew The Gun at Patterns. They delivered a melodic, dancey 80s flavoured indie pop that got the crowd bouncing. There was also a yacht rock feel with ‘Very Personally Yours’ that contained a sprinkling of Prefab Sprout influence.

To tie in with the new album the headliner’s stage set up was made to look like an office with glass-panelled doors, a stopped clock and a desk with a pc on it. Neil Hannon came bouncing out in a shocking pink suit and shades doing a robot dance for opener ‘Europop’. A joyous ‘Queuejumper’ followed with the keyboard player using marimba and piano as Hannon shimmied around declaring why he was “smarter than you”.

‘Generation Sex’ was playfully bouncy and showed how strong the front man’s voice was. A pair of ballads began with ‘Commuter Love’, documenting unrequited love on a daily commute that included the great line “she doesn’t know I exist, I think I’ll keep it like this” and ended with the exquisite ‘Norman And Norma’, a quintessential Divine Comedy song.

A shout out for ‘My Lovely Horse’ was responded to with “just for that, you’re going to get ‘The Synthesiser Service Centre Super Summer Sale'”, a tongue-twisting catalogue of keyboard names perfectly executed over woozy synths. There was a brooding exotica feel to ‘You’ll Never Work In This Town Again’, an improvement to the electroswing version on the album and a tango menace on ‘I’m A Stranger Here’ which saw the band harmonizing, huddled around a radio mic while Hannon strummed an acoustic guitar.

There were balloons and party hats for a lively ‘Indie Disco’ which went straight into a boisterous ‘I Like’ before Hannon implored people to “put your fucking phones away and enjoy” ‘National Express’. The bass heavy, disco funk of ‘Life And Soul Of The Party’ ended the office party with Hannon kneeling at the front of the stage asking to dribble into someone’s ear before drunk dancing, spilling drinks and talking to his beer.

‘Absent Friends’, his powerful testament to Jean Seberg, Steve McQueen and co was sung with passion and power, making it the Scott Walker moment of the night. Office Politics’ melancholic final track ‘When The Working Day Is Done’ closed the show with the band again providing fine harmonies before everyone filed out through the office out door.

For the encore we were treated to ‘Philip And Steve’s Furniture Removal Company’ which saw the stagehands dismantling the office while Hannon dictated his idea for a song about Philip Glass and Steve Reich’s imaginary removal firm backed by rapid handclaps. They should have stayed but chose to leave and return for two more songs, all gathering around the radio mic for the Father Ted theme, ‘Songs Of Love’ beautifully backed by snare brushes and melodica. We were further spoiled by a final, triumphant ‘Tonight We Fly’; a perfect ending to a superb evening of magnificent pop music.