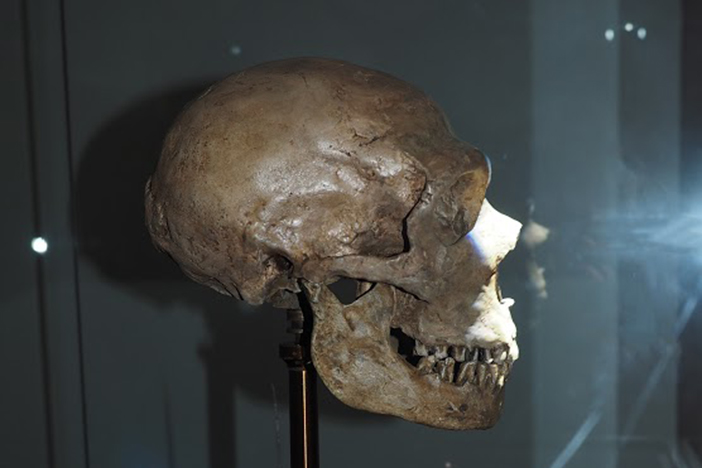 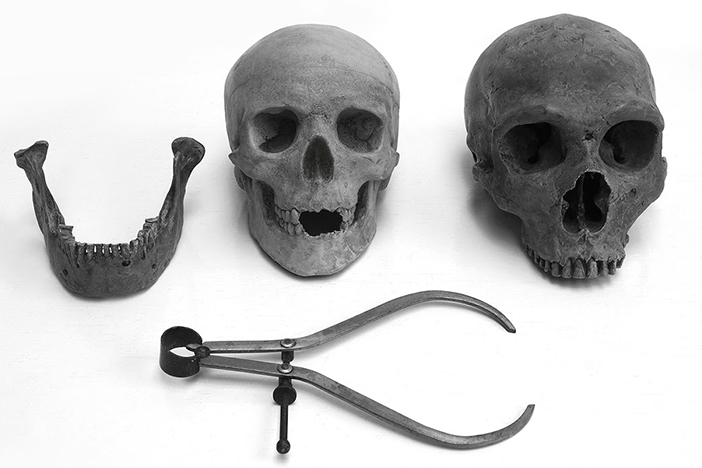 Phoenix has hosted a string of strange and intense exhibitions over the years. But Guyan Porter’s claim to be presenting the only complete Neanderthal skull anywhere in the world is a particularly inviting – and possibly unprecedented – addition to latest display The New Immortals.

In De Conditioning Chamber, visitors are instructed to enter alone, wait for a red warning light to shine and anticipate the activation of a device (“participate for as long as you feel comfortable”). It’s an environment testing two human tendencies the Sussex-via-Glasgow artist takes particular interest in: deeply-held beliefs and mortality. Perhaps unsurprisingly, then, Porter also owns a large collection of bones. Some are human. One might be the intact Neanderthal head. Skulls, as he points out, are artistic motifs of impermanence and our slender grasp on good old life.

There’s a lot more mortal stuff going on in this Brighton Science Festival exhibition at which curator Judith Alder – who made a video of mice discussing cheese as part of a kickstarter to fund its artists – saw hundreds of people ponder our plod to death across the space on the opening weekend.

The Facts Of Life, a video, text and sound work based around the mind-body split, prises open existentialism and is at least partly inspired by the findings of go-to psychosis guru RD Laing. But people might not meet death and its preceding crises too often if Aubrey de Gray’s theory – that the first human to live to 1,000 might already have been born, visited here in an introductory video – is true.

Amid works on quacks and elixirs in a domestic living room, etcher Angela Smith has made a pair of faintly Munch-ian works, imagining immortality and its surrounding mythologies. Fishing For An Answer, more pointedly, is angling at Charles-Edouard Brown-Sequard, a French scientist who liked investigative medicine and swallowing sponges on a thread, retracting them from his absorbed digestive juices via a string which allowed him to test his guttural liquids in a series of absurdly brave experiments on himself.

Brown-Sequard probably met a hotter afterlife than cryonics – a group of people who allowed their bodies to be posthumously sub-zeroed in the belief that a deep-frozen body stands a better chance of being revived than a corpse rotting in the ground, particularly once incurable diseases become treatable.

Photographer Murray Ballard has travelled to labs in Arizona, rudimentary facilities on the outskirts of Moscow and, undoubtedly not least, Peacehaven, creating an impartial view of a sometimes-ridiculed practice, spawned by Robert Ettinger’s 1962 book, The Prospect Of Immortality, which has left 200 patients permanently emblazoned in liquid nitrogen.

Their aim was to exceed the longevity of the lichen described in John Wyndham’s book, Trouble With Lichen, in which they form a life-extending elixir – the subject of photographer Fleur Alston’s photographs. “Their lives are often measured in hundreds rather than tens of years,” she says. “Lichen are not individual organisms but part of a symbiotic colony of fungus and algae or cyanobacteria. Researchers suspect that the fungus part does not age.” There are 17 species in the artist’s section of the exhibition, edging closer to watery death one century at a time.