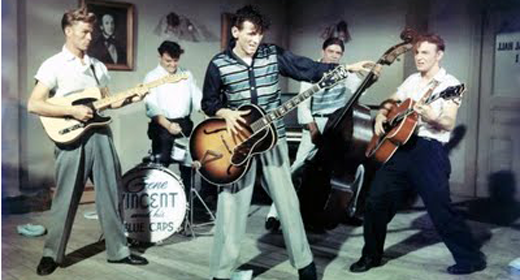 Brighton 1961: plenty of cinemas, but little else. A few well-meaning church youth clubs to hang out in and play table tennis. A kick about in the park, riding our bikes or just hanging out in the street was our entertainment. Saturdays you could meet up in town, but Sundays everything was shut.

The Mods and Rockers were still to come and we were too young to be Teddy Boys. Music on the BBC Light program was bland and ever so ‘nice’. The Goons were the only anarchic thing in our humdrum lives. Thanks, Spike. Coffee bars, if you could find one in Brighton, were the meeting places for the generation older than us, they were very elitist and classified as unsuitable for anyone under 16, 18 or even 21 depending on the trendiness and cool of the establishment and clientele.

A friend of mine obtained two tickets for a tour headed by Adam Faith and featuring Gene Vincent playing at the Essoldo. This was the year we started senior school and so our first visit to a theatre to see our hero seemed appropriate. I don’t recall telling my parents, I took the view that Adam Faith was my mum’s favourite so it would be okay.

Adam was considered a nice young man by mums of the time. If my sister had brought him home, he would have been welcomed with open arms. Unlike the man we had heard so much about and wanted to see, Gene Vincent was a wild rocking American with a reputation for hell-raising as well as playing proper rock music. Gene’s music was not played on the radio, we had just the one station for popular music and it only played music deemed suitable by the BBC Governors. We had listened to some of his records thanks to a guitar-playing friend of my older brother. We heard our parents tut-tut over stories of him in the newspapers, so Gene was deemed subversive, rebellious and underground by us.

We headed off to the Essoldo for our first gig, not sure what to expect but full of anticipation, excitement and a little apprehension. Everyone there seemed so old; they must have all been at least 18, and looked so cool. There we were, desperately trying to blend in wearing the only clothes we had that were not school uniform: jeans, baseball boots and a jumper.

It seems strange now that rock and pop music acts back then were playing theatres and music halls but these were the only venues available. The perception of promoters and impresarios of the time was that this was just another travelling show with a limited lifespan. This concept produced some bizarre line-ups, as who made it on the tour was subject to who was in the hit parade at the time.

The comperes were usually a popular comedian bearing no association with the music. Some acts would literally be one-hit wonders or novelty singers who sang their hit and got off. As well as Victorian/Edwardian style theatres, 1960’s tours were also played in Winter Gardens, Ballrooms, Ice Rinks, Hippodromes, Dance halls etc. without any thought to acoustics or audience satisfaction.

I recall Gene coming on stage clad in his usual black leather. He looked dangerous and edgy in comparison to the other acts. He stood with one leg forward, knee bent, the other, held rigid in a steel brace, thrust awkwardly out behind him. His leg had been smashed in a motorcycle accident, which just added to his kudos. He quivered and shook as he clutched the microphone stand with his gloved hands, vibrating to the music, allowing his body to absorb the rhythms and pump them back out.

During his set he swung his damaged leg over the mike stand, got atop the grand piano and performed with an astonishing agility. With his upturned collar pale complexion and slightly manic stare, he personified the music he made. Here was a true rock singer. This was American rock straight from the emerging US scene that influenced so many of the UK bands that would soon dominate the 60’s.

An American, Gene had to come to the UK where he was ‘discovered’. Like his later compatriot, Jimi Hendrix, it was the British who welcomed him, his music, and appreciated his talent. Gene could and did sing ballads, but he would give them an edge that took away the syrupy overtones and put them in a context reflecting everyday life. His live shows were all about rocking, that’s what his audience came for and they were not disappointed. Gene was a natural performer. He could whip up the crowd, play with them and toy with their emotions; he held them in the palm of his hand. His was a natural talent, he didn’t need choreographers or advisors. He just got on stage and rocked with pure energy.

Gene Vincent was the original legendary black-leather-clad bad-boy of rock. His records were banned and censored around the world. His live shows sometimes incited riots and he wrecked hotel rooms long before Keith Moon and the Who. Without him there would have been no Jim Morrison (Jim was a personal friend of Genes) or Marilyn Manson and even Elvis would have found it harder to become the King.

The great thing is he played Brighton more than once. Gene was back in 1962 at the Essoldo on three occasions: March 31st as joint headline with Brenda Lee, May 7th as a guest on the Jerry Lee tour and November 24th headlining his own tour. Plus he popped up at the Hippodrome on October 14th to introduce Little Richard. Thanks Gene for giving your music to us all, inspiring some future legends, but especially thanks for helping that 11 year-old schoolkid discover what rock music is all about.

Sometimes an article is a bit of a team effort, and those are tagged SOURCE Writers. If you’d like to be part of that team, hit the Contact link at the top and get your work on this website.
← PREVIOUS POST
October 2011 Issue
NEXT POST →
Review: Toots & The Maytals
Mailing List
Recent Posts
Website developed in Brighton by Infobo
Copyright © Brighton Source 2009-2020
Vintage Review: Gene Vincent - Brighton Source