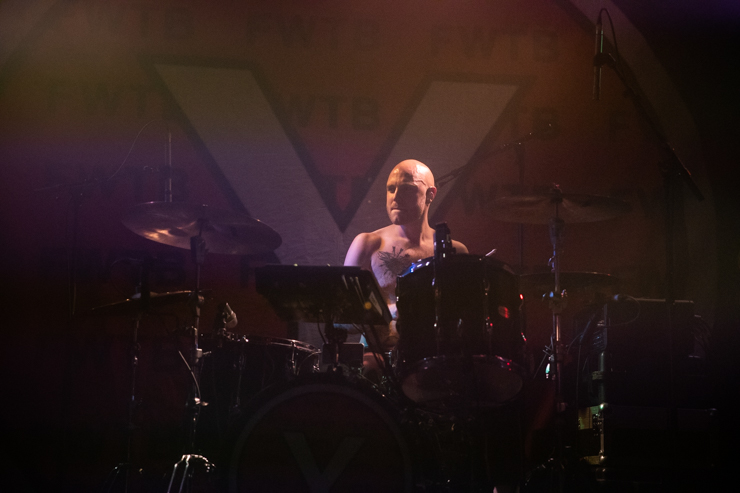 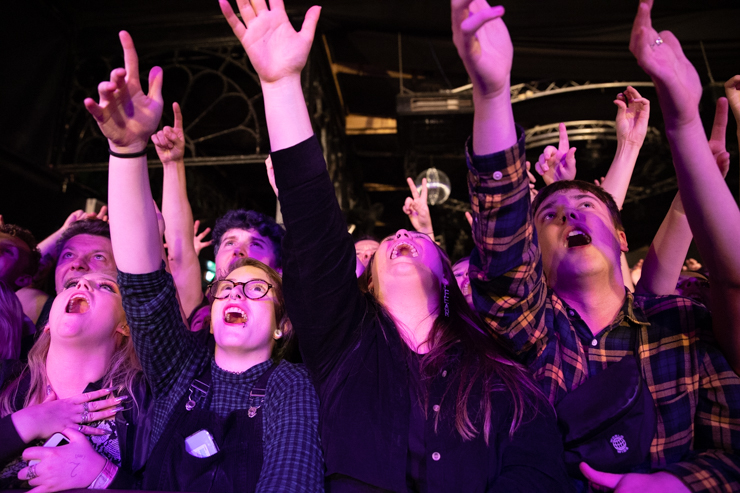 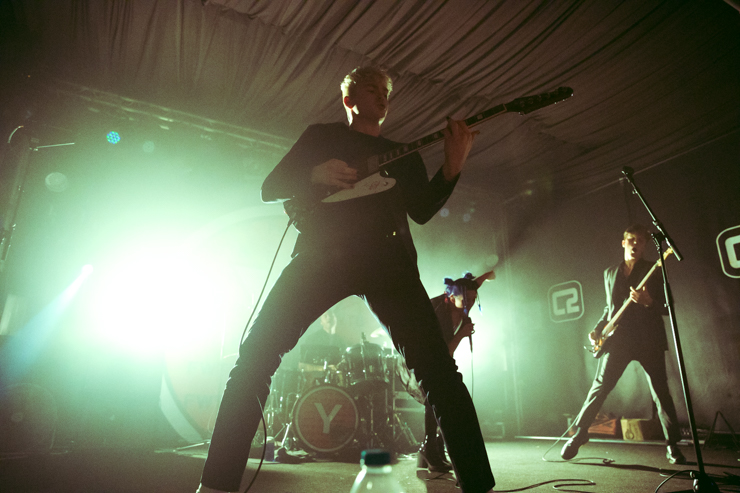 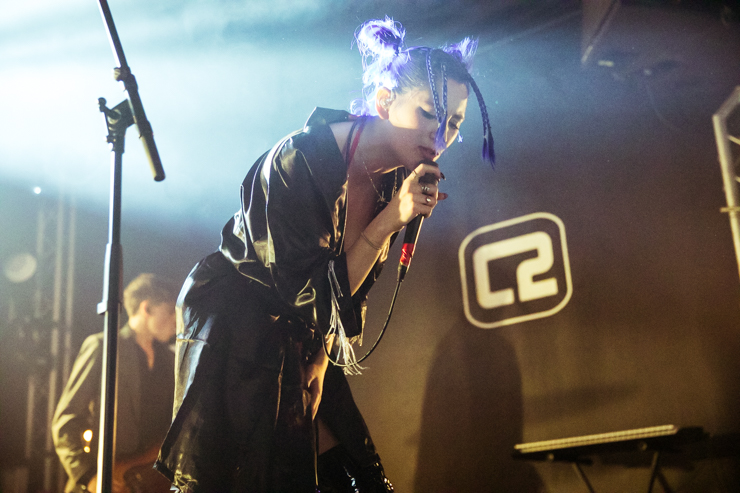 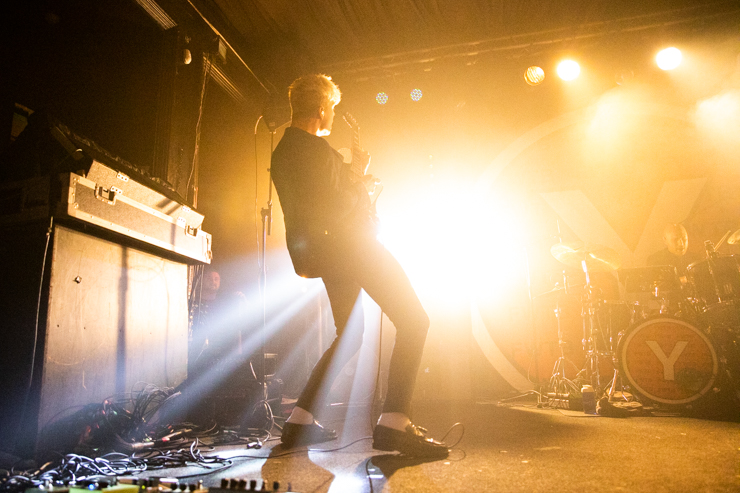 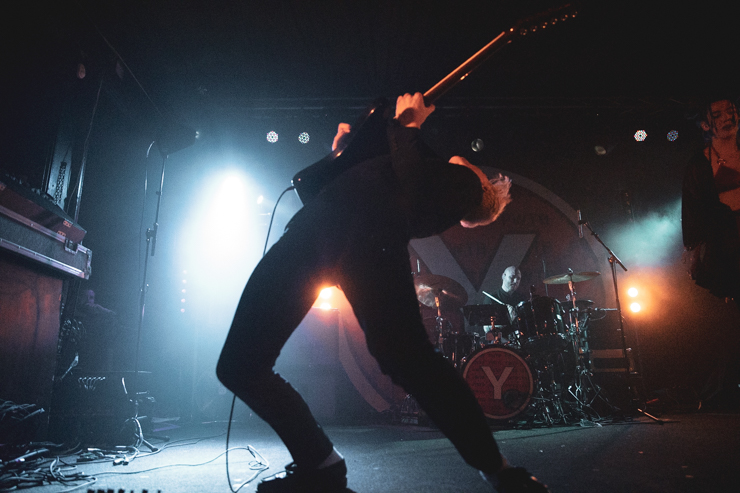 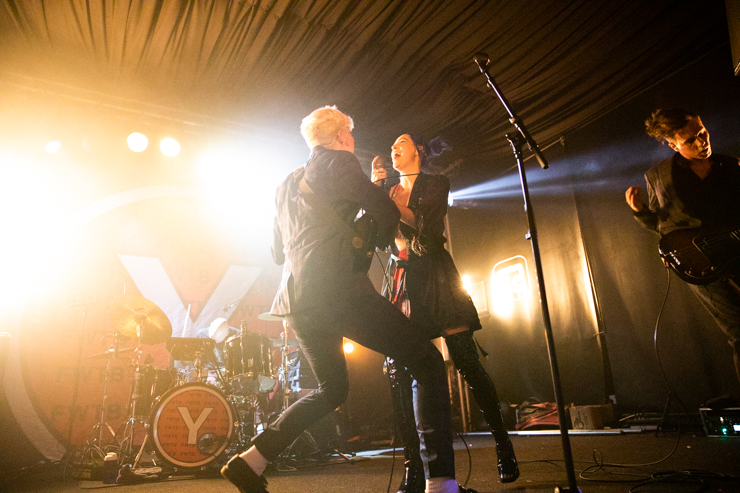 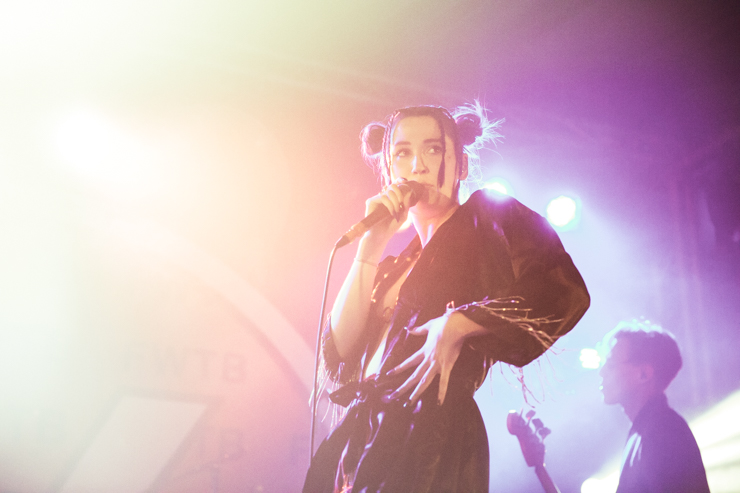 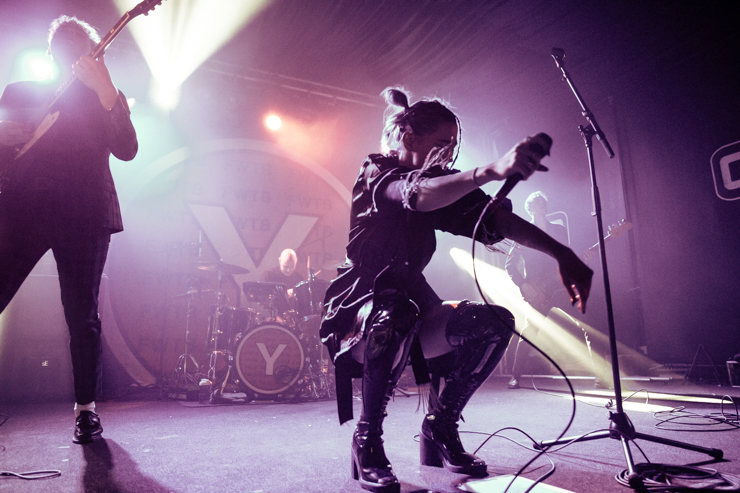 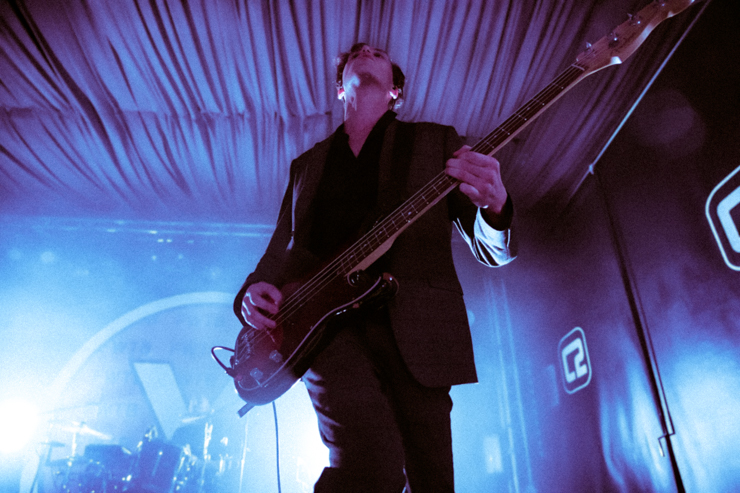 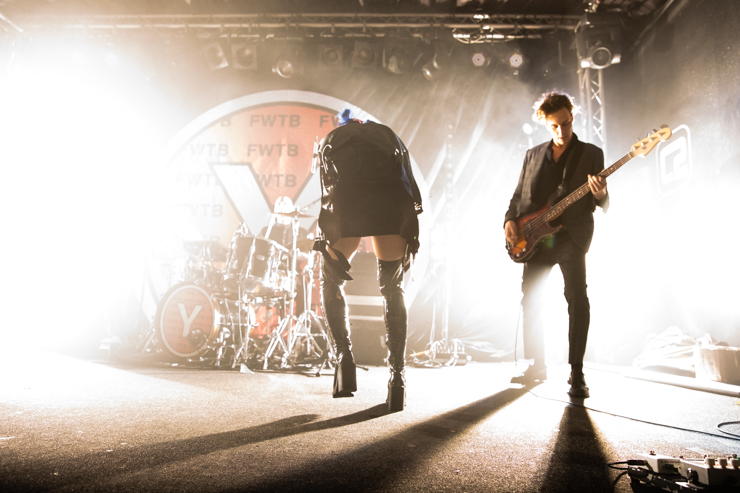 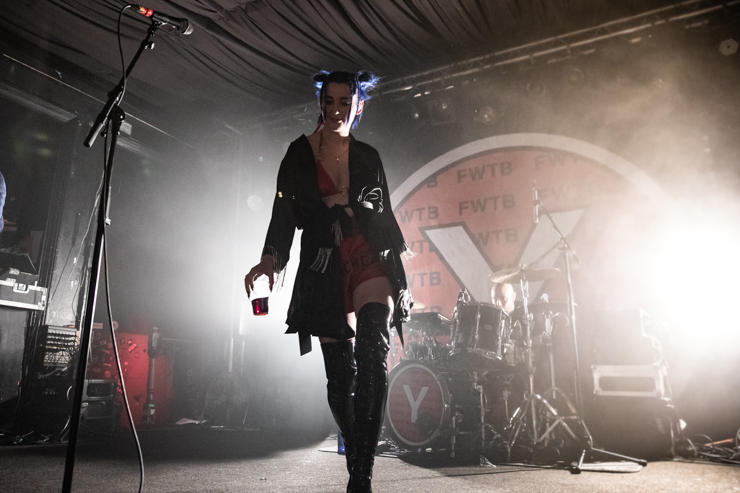 Whilst the masses gather for this evening’s sell-out show from headliners Yonaka, Liverpool’s rising star Zuzu is warming things up. She wins over the crowd with a cheeky brand of vintage-sounding indie-pop, and seems genuinely sweet and appreciative of her audience. She repeatedly thanks us for turning up early to watch her band perform and is effusive about supporting Yonaka, clearly enjoying her moment here. “I’m buzzin’,” she says in a disarming Scouse accent, later imploring us to meet her at the merch stand after: “I promise I’m dead nice!” Rocking a Fender Jazzmaster and a pink tutu-dress combo that sums up her infectious sense of fun, Zuzu is a creative powerhouse that we’ll be keeping an eye on.

The crowd are packed in now and primed by Zuzu’s set. Precisely on time, a thunderous thrum of bass, accompanied by stabs of lightning-like strobes left and right, herald the arrival of Yonaka. Their appearance is met with rapturous whoops, the loudest of which is lavished upon charismatic frontwoman Theresa Jarvis. With bright blue hair in buns, wearing actual boxer’s shorts, tonight she is part anime heroine, part prize fighter taking to the ring. The love in the room is palpable, the band clearly at ease in front of their home crowd.

Without hesitation they blast into ‘Punchbag’, a song epitomising Theresa’s heart-on-sleeve, uncompromising lyrical style. What is immediately apparent, seeing them live for the first time, is the sheer velocity of the sound they make. They are on point, with meticulously wrought arrangements that also boast a raw intensity many bands can only covet.

The crowd are brought into chorus on ‘Awake’, screaming Theresa’s words back to her as she offers the mic and the place is literally jumping by the time the song reaches a typical Yonaka crescendo. The whole band are in full flight now, as are we! There is no let up in Yonaka’s energy. Jarvis’s vocals are searing into our eardrums, Robert Mason’s kick drum feels like it could pound through a wall and guitarist George, who has now tossed away his shirt, is sweatily thrashing around the stage with his every ounce! Shit just got real!

Tonight marks the start of their tour, but Yonaka haven’t played in their beloved Brighton for a while and Theresa affectionately addresses this between songs. In fact, the positivity imbued throughout the set is truly endearing. No moment defines this better than the intro to ‘Don’t Wait ‘Til Tomorrow’ where Theresa beseeches us to look out for each other and not succumb to the demons of mental health. “You’re stronger than you think you are!” she shouts, before they burst into the title track from their debut.

Later in the set we are given a short reprieve in the form of an acoustic version of ‘Guilty’ (Robert and bass player Alex briefly exit, Theresa and George remain). Shifting gears for this mesmerising rendition, the duo deftly strip the song to its bare bones. This is followed by the anthemic ‘Rockstar’ to pick things back up, a real highlight! Set closer ‘F.W.T.B’ is a perfect bullet to the head, prefaced by Theresa’s ardent advice to reject anyone’s attempts to shatter your dreams and to keep believing! It’s a ‘mic drop’ moment but Yonaka leave the stage with grace and appreciation for our support this evening.

Yonaka are a band already heading places. They narrowly missed out on the gong for Best British Breakthrough at this year’s Kerrang! Awards, while their debut album hit number 38 in the charts. No doubt they will build on this in their bid for world domination, but it’s clear their endeavours are driven by a core of passion, heart and zealous positivity. Tonight is a raucous example of just that!

Gili is a Brighton based music photographer who also writes the occasional review. Originally from Israel, Gili moved to Brighton in 2014 to pursue her dream of becoming a professional concert photographer and has been photographing bands and concerts since.
← PREVIOUS POST
DJ Format comes to Club Tropicana
NEXT POST →
Deerhunter Review