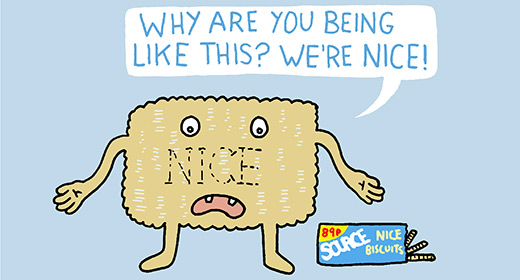 SOURCE Virgins: Giving Up Everything

THE REASONS
Many good years of late nights and fun times had left my body broken – suspected rheumatoid arthritis, possible coeliac disease and a myriad of niggling health problems for which the only recommendation was a lifetime of painkillers. After a few years of unenlightening NHS tests and scans I gave up on conventional medicine and consulted a nutritional therapist in the hope that they could succeed where my GP had failed and mend me.

THE EXPERIENCE
I went to my first appointment knowing that I was probably saying goodbye to all the good things in life. I’d already given up gluten a few months previously, which meant waving farewell to the delights of biscuits, bread and cakes. After some tests I was told I had candidiasis (and no, that doesn’t mean I have thrush), which was probably responsible for all my random symptoms. As expected I was sent home with a list of foods to avoid. Gluten was still off limits, but in addition I couldn’t eat any dairy, sugar or caffeine. Drink, drugs and smoking were banned too, of course.

I really, really like biscuits, and giving up gluten had been hard. But at least I could compensate by eating loads of cream, chocolate and crisps. Not any more. However, I was buoyed by receiving a diagnosis at last so I got stuck into my new diet, hitting Infinity Foods and stocking up on alternative carbohydrates like millet and buckwheat whilst eavesdropping an argument about jazz between two men wearing tie-dye jerkins and patchouli sandals.

Now, I’m not much of a cook and the instructions on the side of my buckwheat packet weren’t particularly instructional. After attempting a salad which my other half described as ‘the worst thing I’ve ever tasted’ I realised this was going to be difficult. It appears that virtually every single item of food you can buy in the supermarket has sugar, or sweeteners, or gluten, or some kind of weird additive or refinement that makes it bad news. That meant that I couldn’t buy anything in a packet, and every single meal would need to be made from scratch. Not only that, I could no longer pop into the corner shop and grab a bag of crisps because I’d stayed out late and missed dinner. Convenience and me were no longer friends.

Spontaneity went out the window as I became one of those mum types who carry round Tupperware containers of warm carrot sticks and humus. My weekly shop became a daily chore as my bank card was repeatedly raped by the Infinity tills. The endless cooking and washing up left me with no time for friends or fun, which was lucky because I had no money for the pub anyway. And the pub is shit when you’re sober, and can’t even eat peanuts.

House calls became a thing of the past as I grew tired of refusing tea and biscuits, and explaining myself endlessly. Interfering relatives listened sceptically and quoted ‘Bad Science’ at me, disregarding my improving health in favour of advocating ‘everything in moderation’, whilst pushing plates of cheese on toast toward me. Being a bit shy I’m a great believer in the social crutch, and there isn’t a single activity in the world that isn’t enhanced by a glass of whisky and lemonade, or something stronger. My birthday was coming up and I realised that having a barbecue, picnic or party would result in watching my friends getting twatted and scoffing burgers while I ate a rice cake and did shots of cider vinegar. Nothing was on at the cinema so I cancelled my birthday and spent the night catching up on the washing up and feeling a bit sorry for myself. The next day, hoping to put it behind me, I went to visit my in-laws. They presented me with a birthday cake. I watched them eat it whilst silently wishing they’d choke on it. It looked delicious. I was starting to feel a bit stabby.

My life was now a tedious grind of chopping vegetables, counting out vitamin supplements, reading labels, finding new and exciting ways to cook tofu. ‘If it looks nice I’m not allowed it’ was my catchphrase as I desperately read menus looking for something, anything, I could eat. I longed for a slice of buttery toast, meringues and cream, chocolates, a cup of tea. Walking past a pub on a sunny afternoon left me wretched as the smell of pool and drunken foolishness wafted out the door to taunt me.

Apparently (and I don’t care if this is bad science) the treatment causes your liver to be flooded with toxic crap and when your liver gets overloaded you’re prone to ’emotional outbursts’. My liver was already marinated in party toxins so it’s no wonder that the treatment sent me over the edge. For two days a week I veered between desperate sobbing, “I just want a piece of cake/shot of Tuaca/36-hour drink and drug binge”, to having to leave work in case I shouted at my colleagues, or worse, a client. It was like the worst PMT imaginable.

A summer itinerary of weddings and festivals made life even trickier. Going to a party and watching your friends getting pissed and exclaiming over rad-looking puddings while you’re restricted to eating an olive gets a bit wearing, but keeping it together at a festival is almost impossible. My military planning was to no avail as pre-prepared tubs of salad wilted in the heat, and ham and chicken turned an ominous shade of green. Luckily I could enjoy emergency rice cakes and pumpkin seed butter. For three fucking days. In the old days I just wouldn’t eat but that isn’t really possible without substance abuse to get you through. Festivals and drugs go hand in hand, and the lack of chemical enhancement left me feeling excluded from the experience as I watched the mayhem unfold around me. I was necking 20 pills a day, but antifungal supplements are rubbish for getting messy and dancing.

I went back to the nutritionist and pulled a sad face and talked about cake. She offered me a sliver of hope in the shape of ‘Carrot Bread’ – a tempting treat made from carrots, xylitol and pumpkin seeds. It looked as though someone had sicked in a cake tin. It’s a telling sign of how desperate my life has become that I now look forward to that twice-weekly slice of savoury carrot filth like a sailor on shore leave looks forward to a disease-ridden whore.

WAS IT WORTH IT?
After two months I’m completely skint (those supplements don’t come cheap) and I can’t even remember the last time I really enjoyed eating anything. However, my resolve was strengthened when I snapped and ate a piece of buttery shortbread. The next day I felt dismal, and I remembered that I’d felt that ill constantly prior to starting the treatment. I’m not better yet, but everything hurts less than it used to, and I know that I’m doing the right thing. I’m still a shit cook but I’ve doubled my repertoire of meals, I’ve lost stacks of weight so the dress I bought last year in Beyond Retro in a hopeful moment now fits me, and one day I will eat cake again.